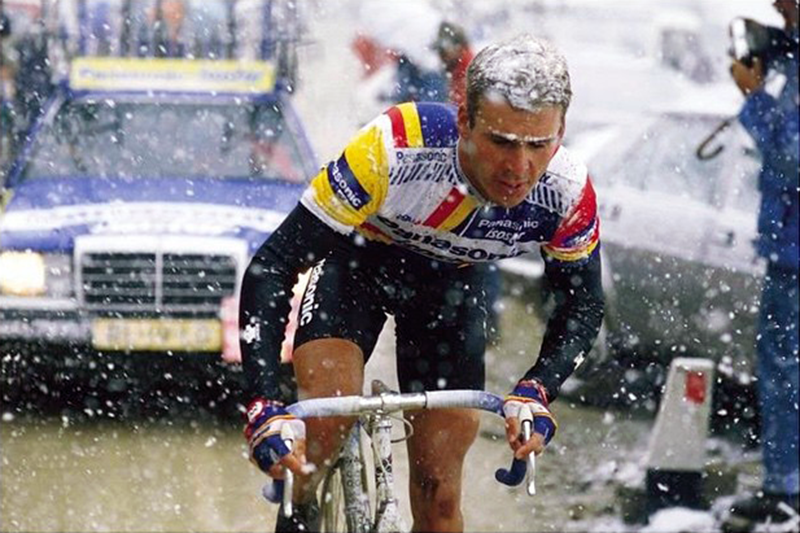 I do love my Dutchmen. That much I admit. I also admit my love for the Americans with whom I share a passport. These affections are expressed erratically and sporadically, often at high volumes, and sometimes with some unreasonably held or possibly non factual evidence to support my passion.

At this point, my love for the 1988 Giro stage over the Gavia should come as an obvious segue. Andy Hampsten is famous for his epic ride over the Gavia that year to win the General Classification. The 7-Eleven team, relying on the experience of its Midwestern roots, understood that riding over the Gavia in blizzard conditions would require some cold-weather gear. Off to the local ski shops they went to buy warm gloves and wooly hats and the like. The rest of the European peloton figured that Cycling kit was as good as anything, so bugger all that sissy crap.

Uphill was undoubtedly cold, but the real terror arrived once the road pointed downhill and shit got real. I live in Seattle, but grew up in Minneapolis. I have raced in a one-piece spandex suit at -10F. I am here to tell you that the coldest I’ve ever been is riding my bike at near the freezing point in snow/sleet/rain. Below freezing, water freezes and you have the means to combat the cold. Water at its coldest chemical state recruits the fury of the wind to its side and brings the kind of deep tissue, bone chilling cold that doesn’t otherwise exist.

The hell of that descent from the Gavia must lie well beyond any level of cognitive appreciation I can bring to this conversation.

What isn’t commonly appreciated is that Andy didn’t win the stage over the Gavia. He lost Erik Breukink’s wheel somewhere along the way on the way down, likely because Erik’s lack of kit made him even more desperate for the warmth of the finish line. But nevertheless, Erik crushed it that day, in regular kit, seeking shelter from little more than a pair of arm warmers, overshoes, and regular Cycling gloves. He even raised his arms in salute as he crossed the line; having been cold on a bike before, I am most amazed he had the V to withstand the pain of outstretching frozen muscles. But I suppose one does not miss those sorts of opportunities.

Step aside people, the Dutch got this shit. If we can keep the ocean from flooding our country, we can certainly handle a little snow storm on a mountain road. That is all.