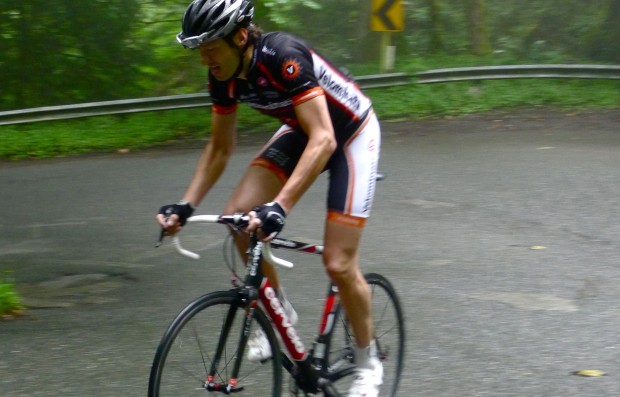 Those things in life that are worth having are those things which are difficult to come by; perseverance is made more rewarding by the volume of messages ignored by the mind as we work towards a goal.

Fatigue comes in many forms and is normally framed in negative connotations; weariness, exhaustion – both things to avoid. For a Cyclist, it can carry a range of  meanings. We may become weary of riding in the rain, as I normally am at this time of year; stuffing my shoes with yesterday’s newspaper post-ride in the hope that the dry accounting of our current events will somehow render my shoes less soggy the next day. We may become weary as we approach the big climb of the day when we know what suffering lies around the bend. To push on during an effort despite an overwhelming exhaustion that lays bare our spirit and threatens to stop our legs from turning.

But fatigue can be a beautiful thing. The fatigue that registers as a result of the post-ride status check is the gauge by which we measure satisfaction in our work. Even during the ride, we find that fatigue may not always be the sentinel of the Man with the Hammer; even as the wave of exhaustion washes over us, we learn through practice that we can continue or even lift our effort.

My favorite fatigue is the kind that sets in during a long ride; when the body has acquiesced to the mind and the signals of discomfort and pain have stopped being sent. The legs at this point take on an almost anesthetic quality to them, they don’t hurt but they don’t feel either; they have a thickness that, while they lack the punch they have when fresh, allows us to continue to push on the pedals for hours on end.

This happened to me during my most recent long ride. It was a cold, rainy day – cold enough that snow fell at the tops of the two major climbs of the day. The last big climb came at 160km and, while there is no such thing as a flat route in the Seattle area, the roads home lacked the steep grades that characterize our urban streets. The descent from Cougar Mountain froze me to my core. Starting in the snow and ending in the pouring rain, I arrived at the first of the minor climbs on the way home and pushed the button on my left shifter to slip into the little ring. Instead of making contact, my frozen hand slipped limply along the lever and did little more than jiggle the button.

This presented an unusual problem. At this point I was tired after having a piled a load of kilometers in my legs. I was also becoming just the slightest bit annoyed at how cold I was. I swerved dangerously as I experimented with bashing different parts of my hands and arms against the disappointingly stubborn shifter to try to get it to budge. Inanimate objects and I have an uneasy history, and I soon found myself giving it the customary inputs involving profanity and questioning the pureness of its mother.

Having that unpleasant business out of the way, I resigned myself to riding home in the big ring feeling fortunate that my right hand was still capable of shifting so at least I wasn’t riding a glorified single speed. And then it hit me: it was actually quite easy to carry on this way, riding in the big ring. The legs still managed to turn over and I hardly felt a thing as I pushed harder on them whenever the road pointed up. Even a few of the hills on which I struggle to stay in the big ring during my usual training rides seemed to pass under my wheels without giving undue notice.

That sensation of power combined with the heavy fatigue I carried with me distinguishes itself as one that comes only during my longest rides on those days when my form is good enough that the effort hasn’t cracked me entirely. Wholly unlike the seduction of La Volupte, it does bear a vague similarity in its rarity. Powerful fatigue; vive la Vie Velominatus.