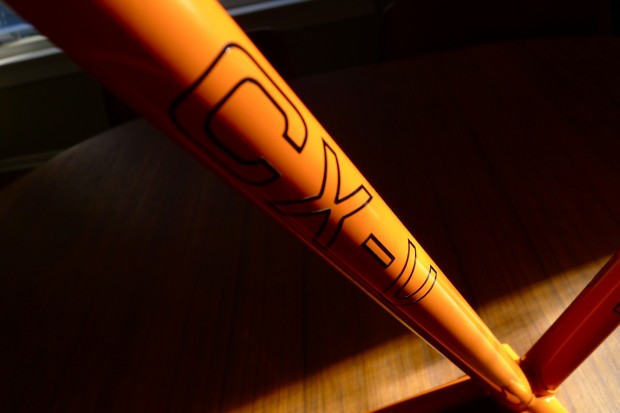 Building a frame has been, since childhood, a dream which always seemed a little bit out of reach. Aside from not being sure how not to do it wrong, I’ve always assumed that, in addition to nunchuck and computer-hacking skills, my lacking of welding skills would render any would-be frame unridable at best and lethal at worst. Not to mention the associated downgrade to my living conditions, based on the assumption that a house is less comfortable after being burned down in whole or in part, and that said burning would terminate abruptly and with little warning the relationship with my VMH.

Unbeknownst to me, @Cyclops has harbored a similar dream. Fortunately for him, having only one eye doesn’t give depth perception in foresight, and as such he wasn’t hampered by my aforementioned concerns. Instead of dreaming, @Cyclops took action: he bought himself a book, a welding set, some cheap tubing, a fireproof suit (I assume), and busied about practicing the basic skills required to build a frame. Once he was sure he had it pegged, he picked up a good set of Columbus tubing, and set about building his first official frame.

For reasons that I hope don’t include “if it falls apart, a face-plant can’t make him uglier”, @Cyclops decided to pay me the great honor of building his first frame for me, serial number FS0001. I had no idea, of course, until I got an email saying he was shipping something to me and would I be home to receive a package. Yeah, sure, no problem, whatever – @Cyclops is a bit of a craftsman and sends me his creations occasionally. A few days later, I get a considerably more worried email, saying that bad weather delayed the package and it would arrive a day later – would I still be home. No, sorry, can’t be – I’ve meetings that I can’t move – one must occasionally do their job, after all.

Worried emails turned into worried voicemails until eventually @Cyclops seemed intense even on a scale adjusted for his usual intensity. But thanks to UPS being late in delivery, I was home by the time the box arrived and I sent a text message saying all seemed well. I opened the door to find a bike-sized box on my porch, and my curiosity was piqued. It’s a funny thing, how used we get to seeing boxes that contain bike parts; my first thought was, “Oh, that looks like a frame” but immediately dismissed the notion as impossible. When I dragged the box inside, my VMH’s reaction was similarly tuned, “Did you buy a frame you didn’t tell me about?”

As I unpacked the box, I migrated through a confused web of impressions and apprehension as removal of packing and wrapping material revealed first an orange frame and then a custom orange frame bearing the designation Nederaap – a play on “DutchMonkey” combining the Dutch words for the Netherlands (Nederland) and Monkey (Aap). Further inspection revealed a beautiful, steel cyclocross frame with carbon wishbone seat stays, handbuilt by @Cyclops himself.

The amazing thing about this frame is how absolutely Fantastic it looks, despite being built by a crazy person. Anyone looking at the frame would have no idea that some dude in Idaho bought a book and blowtorch and built it from scratch.

I’ve been planning on getting into CX for a few seasons, but among the various reason’s I’ve not done so is the fact that I’ve not been able to track down a frame in a geometry that I’m satisfied with. But ‘Clops had a master plan there as well, as he matched the dimensions on the frame to those of my beloved Cervélos – adjusted for CX. Problem solved.

In addition to this being an incredibly kind gesture – and one I really don’t know how to (a) explain or (b) repay, @Cyclops has breathed new life into my dream to someday build frames myself. I look forward to the day he becomes my Framebuilding Sensei, just as Oli recently became my Wheelbuilding Sensei. What a cool, generous community we have here.

With that, I officially start Il Progetto: Nederaap CX-V. For various reasons including that I’d like to move Bike #3 from Shimano to Campa, my plan is to move my 7701 group over to the CX-V. In addition to wanting the same kit on all three road bikes, I like the idea of the ultra-reliable 9-speed Shimano group being the one to be dragged through the mud and the crud. The next order of bidniz is to figure out what finishing kit goes on. 3T Rotundos and Fi’zi:k Arione are no-brainers for the contact points, but the rest is pretty much up for grabs. I’ve always been a fan of Alpha-Q forks, though @Cyclops designed the frame with a Richey in mind. Alpha-Q’s are still available if you know where to look; but surely there are other options, and I like the idea of getting the fork for which the frame was designed. There is the question of wheels as well – do I build up a set, buy complete, or repurpose wheels I already have? Then there are the matters of brakes, chainrings, seatpost, and stem. I can’t think of a better way to spend the next several months but pondering these serious problems at length.

Check out @Cyclops’ framebuilding site for documentation of the process, and start making plans for your first Factory Five frame. @Cyclops: thank you, from the bottom of my heart.