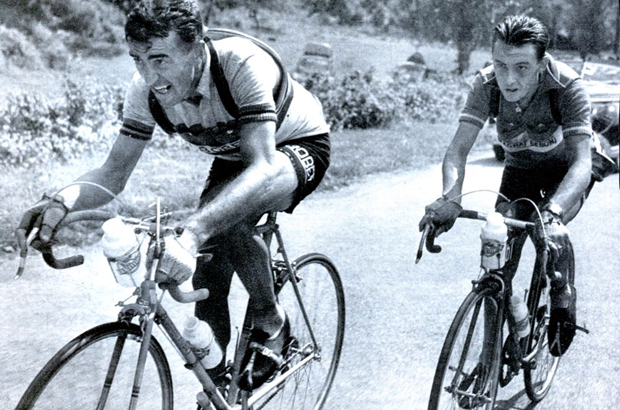 Cycling enthusiasts used to mash a giant gear for one, simple reason: it looked super cool.  Do you want to ride like Lucho Herrera who is always falling off his bike or Eddy Merckx who is always winning races?

Even as recently as the 90’s it was a common sight to see the pros riding at a cadence well under 60rpm, with their upper bodies heaving under the strain of every pedal stroke.   These days, the pros dance uphill in cadences of 90 to 100 rpm, making molehills out of mountains.  While it’s amazing to watch, part of me misses the days of the gear masher.  Jan Ullrich was considered to push a huge gear because his climbing cadence was something like 75-80 rpm – hardly anything compared to what they did in the 50’s and 60’s.

During those days, the pros had to ride the Alps of Italy and France on 5, 6, or 7-speed clusters, hugely limiting the range of gears they could reasonably ride.  Until the 80’s, it was very common to run large inner chain rings as well because the derailleurs were not capable of accommodating  the change in chain tension between a 53 and 39 tooth ring like they can today.  Oddly enough, the mountains were just as steep then as they are today, so these poor sods had to slog up l’Alpe d’Huez on perhaps a 42×21 while today’s pros get to choose between a compact or regular crank and cassettes that smoothly transition between an 11 tooth sprocket and a 26 on their 11-speed clusters.

The result was super low cadences, and an enormous spectacle to push their gears around, making every pedal stroke look as difficult as it was.