Flandrian. While its real definition is a lot more complex than I’d ever imagined, it’s a word that is bandied about frequently here in relation to weather matters far less serious.

If it’s bucketing down, a stiff breeze blowing or the air has that frosty bite to it, we are inclined to state “It’s a bit Flandrian out there”.

Of course the image of ‘Flandrian’ we conjure in our minds is something like this: 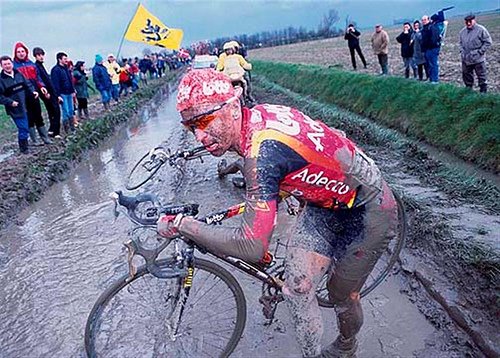 The hardmen of Belgium, from the region of Flanders in particular, slogging it out for hours on end in the harsh northern climes, eating mouthfuls of mud mixed with animal waste from the ancient farm ‘roads’, surfaces which were never intended for fragile bicycle wheels to traverse, but rather wooden cart wheels to be dragged along by cloven hooves.

We wish we could be as resilient as the Flemish, but concede that if the weather is any more inclement than which we rode in last weekend, when only a light rain jacket is required, the roads get no bumpier than a layer of gravel on top of the hot-mix and the tips of our ears are easily warmed by a cotton cap, alas the spirit of Tchmil*, De Vlaeminck or Van Petegem will not be invoked.

To paraphrase Fugazi, Flandrian is just a word, but I use it.

*While you may say “but Tchmil was Russian”, he embraced the Spring Classics and extolled the Belgian hardman ethos so passionately that he became one of them. “People are cynical when I talk about Belgium. They think I’m only Belgian on paper. That is not true. Yes, I was a Russian, even a proud one…. Now I am proud to be Belgian.”