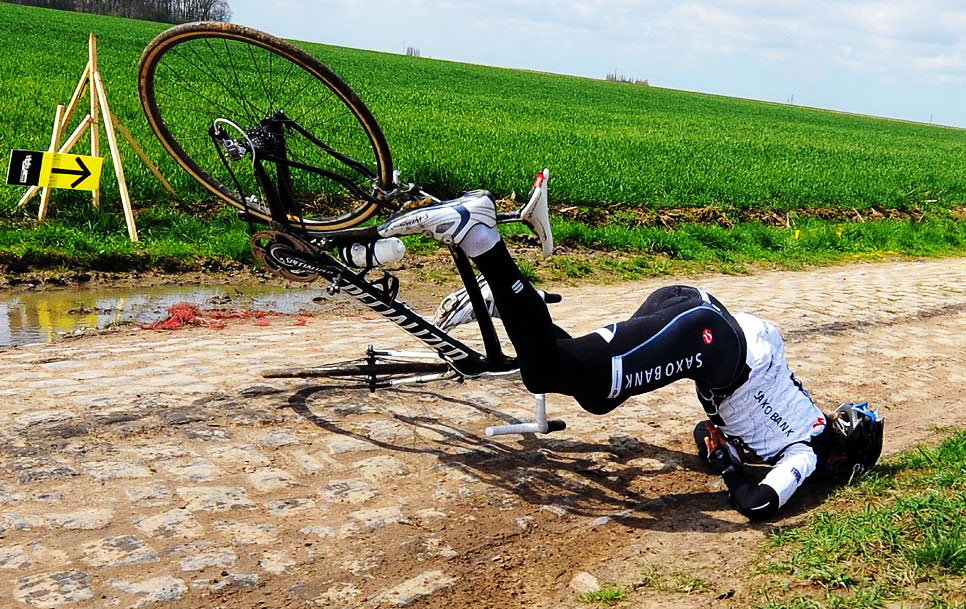 Everyone knows it’s a great idea to change out pieces of equipment the day before a group ride, especially an honorary Ronde van Vlaanderen Cogal involving steep, cobblestone climbs. There is obviously also no need to test-ride the equipment after making said change.

I remark at this point that it is rather unexpected to find an 11 speed chain inside a box labeled as being 10 speed. I also note that an 11 speed chain is not obviously narrower than its 10 speed counterpart. Once installed, it even seems to operate normally, happily jumping from one cog to the next, up and down the cassette, as you click away at it on the work stand. It gives the strong impression of being a happy chain.

This is a ruse. It is not a happy chain. In fact, it is a borderline malicious chain; it lulls the rider into a false sense of security, right until the moment that enough pressure is applied to the pedals, at which point the chain will rudely skip. The amount of pressure required to make the chain skip is dependent upon in which gear you are riding; some skip easily, some (seemingly) not at all. The ones that seemed like they didn’t skip at all were the two lowest gears. Comforting, knowing the steep cobbled climbs that were to be gobbled up towards the end of the ride, where they would be most instrumental.

As it turns out, the amount of pressure required to skip the chain is the amount applied at roughly 20% and the rider has risen out of the saddle in search of extra power. This came as quite a surprise to me, the rider, and also to those riding behind me, who used words like “ejected” and “like you hit an invisible car” to describe what they saw.

So, I can make with certainty the following observation: a 10 speed chain and 11 speed chain might not have any outward trappings of distinction between them but they are indeed very different. This difference manifests itself by one functioning as expected and the other having the capacity to eject a rider when combined with a 10 speed drivetrain. It all seems very obvious, but that doesn’t make it less true.*

There are many other examples of this I’m sure; I remember having quite a job of properly connecting my Cinelli stem to my Scott Drop-In handlebars because the diameters did not quite match. That one also resulted in some high speed handling anomalies.

There are two morals to this story. First, it matters whether your equipment is interoperable. Second, if you make a change to your gear before a big ride, for the love of Merckx, take it on a test drive.

*As it turns out, it does in fact make it less true; this should function flawlessly but it was a worn(ish) cassette that held the secret to the bikes newly discovered ejection function.