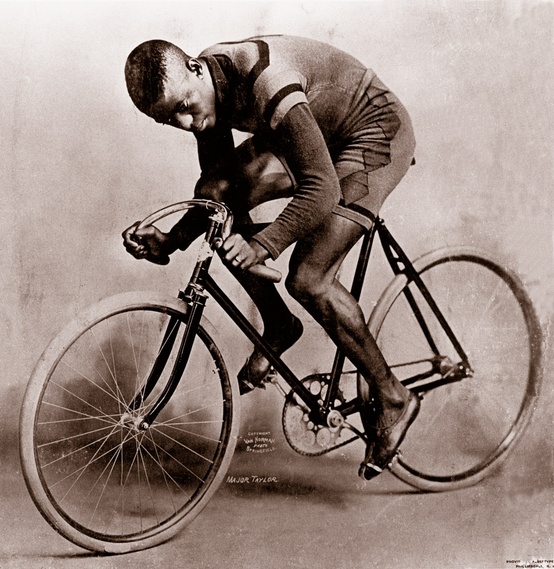 Cycling: The Sport of the People

Monday in the USA is the national holiday to remember Martin Luther King. He was a great man but he was no cyclist. Fifty years before MLK, Major Taylor was the Eddy Merckx of cycling. In 1900 cycling was the king of sports. Outdoor tracks and velodromes dotted the country. Taylor was the original Cannibal, regularly winning sixty percent of the professional races he entered and he was the first black world cycling champion.

A real honest-to-goodness champion can always win on the merits.””Marshall Taylor

Despite longstanding racism in the United States, Major Taylor fought his way to the top of his profession. He traveled the world kicking ass and maybe changing some minds. More than a hundred years later, the velodromes in the USA have mostly disappeared, cycling is a marginal sport and in the USA cycling is still too often a white person’s sport.

What I find encouraging is the changing face of the professional peloton. It is starting to reveal the expanding nature of cycling’s popularity. In last year’s Tour de France we saw Chinese rider Ji Cheng doing his daily Sean Yates impression- crushing breakaways all day long. It is a universal cycling language; put the strong bastard on the front and keep him there. African team MTN-Qhubeka rode well in its first Vuelta. From the insanely fast stage racing I’ve seen in Africa, MTN-Qhubeka should eventually be a powerhouse. Athletic excellence knows no national boundaries or race. If one has the massive talent and desire there is a decent chance one can find a way up to the professional ranks.

Thirty years ago an all Dutch Grand Tour podium may have been unremarkable, now that podium usually represents three different countries or just as easily, three continents.

The bike is the vehicle of youth and it is there the fire starts to burn. And we are now all adults still obsessed with riding around on those same two wheels. Why does this melding of human and machine so captivate some, where ever they live? I’m already looking forward to seeing the great huge unknown kid from the Mongolian steppes. He herded horses on a bike to the dismay of all around him. Headwinds are all he has ever known. Bidons, what are those? When he first rides the stones of Roubaix they will be the smoothest thing he has ever raced on. He might not know Merckx from mare’s milk but he will float over the pavé like he was born to it.

29 Replies to “Cycling: The Sport of the People”