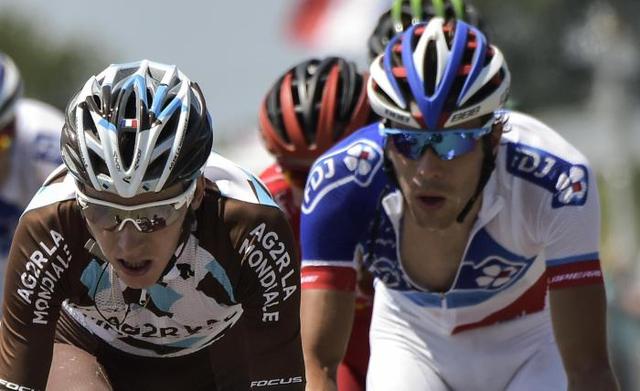 That is my question. Both want to be considered great cyclists, not great French cyclists. It is a cruel and heavy burden to be an excellent French cyclist. When are you going to win the Tour de France? Bernard Hinaults don’t come around very often, maybe never again. Hinault was the French Merckx; winning was everything. If he was not a cyclist he should have been a professional fighter. Fignon was called the professor because he was from Paris and wore glasses, not because he was an intellectual. He managed to win some Tours and not be a badger. He was not out happily slugging protesters. If Hinault had lost to Lemond by eight seconds…one, it wouldn’t have happened. Hinault would have burst his own heart to finish nine seconds faster. Two, if he had lost by eight seconds, he would have slugged Lemond so damn hard it would have put him back in the hospital.

I hope the French are happy they have any prospective Tour winners. The Americans have none. Most countries do not because it takes a special genetic freak in a sport of genetic freaks to be one. The English had to sweep their post-colonial, high altitude Kenyan supply system to come up with one. Of this French pair I have a bias toward Romain Bardet partially because he rides for AG2R and on Keepers Tour 2012 we met directeur Vincent Lavenu. VL seemed a good sort and for inexplicable, Rule ignoring reasons, I sort of like their kit, but I digress.

Thibaut Pinot and Romain Bardet: both 24 years old, both stage winners in the 2015 Tour, both prodigious climbers, both saddled with the “next French hope” mantle.

Judging from this edition’s Alpe d’Huez stage, Pinot actually may be be the stronger climber. If you can ride everyone off your wheel on Alpe d’Huez, you are a badass. For climbing style points, Romain wins. He is solid and smooth to Pinot’s lack of. Going downhill, if you try to pedal through a corner and catch your inside pedal (and crash) doing so, points off. Bardet descends like Philippe Gilbert, that is to say, avec grande vitesse et les grand testicules.

Can either of these guys time trial? If Pinot can he should, by all rights, be one podium step closer in Paris than Andy Schleck* ever got. There is a large leap between a top ten Tour finish and a podium finish. It might be a larger leap from the third podium step to the top. Pinot and Bardet are in this mix.

Neither of these guys seem like punch throwing firebrands like Hinault, which may be good. Then who can better handle the pressure of being the next Fignon?

*I can still make fun of Andy Schleck even though he retired, yes?