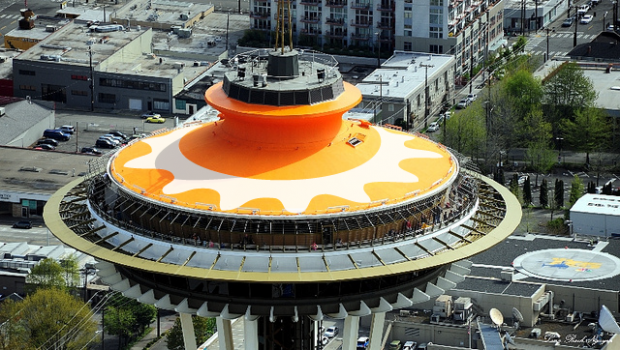 Some weeks ago, I took notice that the days were getting longer (note that this is not necessarily synonymous with “summer” in Seattle) and that it had been an overly long period of time since the Inaugural Seattle Cogal on Whidbey Island back in October. A quick email to Frank to suggest we organize a Cogal resulted in my new understanding of the term “We.” Like many things in life, a few command decisions are all it takes to produce results. The Seattle Summer Cogal 2012 was born. Picked a day. Picked a route. Made arrangements for some niceties pre- and post- ride. Made an announcement. *Ding*. Cogal.

Sadly, my VMH could not ride because of schedule conflict with her primary sport of Olympic fencing, but she did join us for the pre-ride festivities at Ray’s overlooking Puget Sound. Even though we are local, I decided a nice bit of combo would be for us to stay over at the Willows Lodge right next to the start/finish Redhook Brewery after the Cogal – we’ve wanted to stay there and Dr.Mrs. Eightzero was kind enough to acquiesce to my suggestion that we “share our hotel room with a bunch of sweaty guys I met over the internet” so they could get a post ride shower. Love that woman.

I added a few Kms from Casa de Eightzero to make it the full meal (imperial) century deal. I don’t do a lot of group rides, but it was easy to see this group of nut jobs were all very strong, competent cyclists. My moniker “eightzero” comes from my contest number from when I raced sailplanes, and by nature, I’m a rather cautious, non-risk taking kind of guy. But with pilots I knew (and trained) I never minded flying within a wingspan of because I could trust them. So too with this bunch – I learned how to pace-line a little better, and tried to keep up my end of the bargain. I think maybe that was the fastest I ever ran from Snohomish to Monroe, even though Dr.Mrs. eightzero and I have run it many, many times before. Sorry for getting you guys lost – I had the route on my bars on my Garmin 705 and when you drop the guy with the route directions…well…

And of course, I was reminded I am not a climber. At all.

Post ride beerage, refuel at the brewery was the capstone. What a great group. Had a blast.

Speaking of blasts: watch to see what we have on tap for the Seattle Cogal 2013.

@James attacks on the left in a flash of blue… a subtle wave passes through the group… who’s going to respond?  It’s a bit early in the ride for this, isn’t it?  But surely we’re not going to let him get away with that!  @urbanwhitetrash kicks and charges off in pursuit…  fuck it – I’ll burn a match now…  who knows, later in the ride my matchbook may be all soggy from this Pacific Northwest cool almost-rain…  just as I kick, everyone else seems to make the same decision at once, and soon we’re all hot on @James’ wheel as one sweeping, forested turn after another fly past…

It felt a bit like what I imagine internet dating is like – meeting up with folks whom you only know through their online rantings.  Anticipation…  would I get dropped immediately?  Are they really all just a bunch of assholes?  Will I be able to parlay the expected heckling over my lack of Rule #33 compliance into a source of power to lay down The V?

Anybody know where we are?  I thought we were doing the loop counter-clockwise…  No, I think we were supposed to make a turn back there in the middle of the descent…  Doesn’t that Garmin thingy on your stem tell us where to go?  Where’s @eightzero to reel off the route for us?  Hang on, I’m trying to work my iPhone through this plastic bag…

The road pitches up into the last climb, and the group stretches out… After a few minutes, suddenly the grade is perfect and I find my spin and start reeling people in… @G’rilla … @scaler911 … I pass @frank on the final ramp, giving a camaraderie-filled “Yeah baby…” on my way past, which is immediately interpreted as a threat…  I feel, rather than hear (Principle of Silence, remember) Frank pull on behind me, and moments later he passes with extreme prejudice… must respond… big ring riding… we flash past @James & @urbanwhitetrash, who are waiting for some reason (do they know something we don’t?) and hammer down the other side…

Guns fired… out of ammo…

Thanks, all… for a fine day on the road and a swell evening at the Pub…

Its always fun cycling with people. We cyclists form a subculture connected by a love for the bike. But a group ride really doesn’t go much deeper than that. A group ride is just a ride with other people who like to ride.
A Cogal (pronounce it correctly: cog-all) is different. Its a day devoted first to the bike and then to beer, two things close to my heart. But what truly amazes me is that we’ve somehow managed to go from what I humbly consider the most awesome virtual community in the world to translating that to the physical world. Time and again, the gatherings that have been organized via Velominati have resulted in the meeting of kindred spirits and the building of friendships. To my knowledge and in my experience, every single person who has shown up to a Cogal has been a class act. That, my friends, has nothing to do with us and everything to do with you. You amaze me.
Eightzero organized a fantastic ride for us on a day of questionable weather. And, because I have exceptionally poor judgement, I decided to ride from my home to the Cogal start at Redhook. And then I convinced more people to join me in my idiocy, making me comparatively less stupid.
Casually Deliberate pace? Well, maybe not so much. More like, “split into groups and regroup at set meeting points”. Not the plan, exactly, but its bound to happen when you combine hills and competitive spirits. We had lots of fun switching between mellow paces on the flat that kept the group together and all out battles up the hills. For those of you in the first group, you’ll all remember The Ridge. One of the finer moments I’ve had on a bike in my life.
But its all about the after party. Pouring rain, pouring beer, good food, great service, and a group of newly-found friends.
This is what its about. Camaraderie, friendship, shared passion. And hangovers that take a day and a half to dissipate.
Cheers.

A Cogal is always an opportunity to learn a new route, meet new people, and have a fun time riding a bike.
We made a few wrong turns which strangely ended at the top of a hill we didn’t need to ascend, or at the bottom of a hill that we had to climb back up to find the correct route. Everyone was in a good mood and showed a great level of teamwork for a group of people who had just met each other a few hours before.

It is obvious that my level of preparation and the Cogal’s “Casually Deliberate” pace were not an even match.  Though not the slowest by any means, I failed to contend for any KOM points (this year at least). The route was great, the weather odd but fine, and my Velominoti comrades a blast.  The best part of the ride for me was feeling the loving hand of Merckx himself on my very ass as the grupetto I was in got a 20 Kph
tailwind for the last 10 Km of the Cogal.  It was comforting to know that He wanted to hurry me on my way to my recovery beverages. Speaking of which, while the rain held off for the most part during the ride, we experienced some true Rule #9 drinking on the patio of the otherwise packed Forecaster Pub.  Chapeau to all the riders who braved the elements and “loved the work.” Next year I WILL be prepared for KOM points (even if I AM the oldest SOB on the ride).

I’ve thought a ton about how I could wax poetic about redemption from dropping out of the PDX Cogal that myself and McSqueek organized. But with simplicity in mind, this is my version;I drove to Seattle with McSqueek. Rode fucking hard in beautiful country. Tried to break Frank’s Guns. Couldn’t. Got stupid drunk. Drove back to PDX the next morning. Kidding aside, this was a top notch group, on a top notch route that left
me totally wrecked. I haven’t ridden that hard or far in years. Chapeau @eightzero for organizing, tip of the hat to @McSqueek (my pedalwan) for his massive improvements, and there needs to be a rule about guys coming from Colorado/ Canada/ England and bringing the pain so hard that my starter pistols are going to cooked for days.
Good Shit. Keep ’em coming.