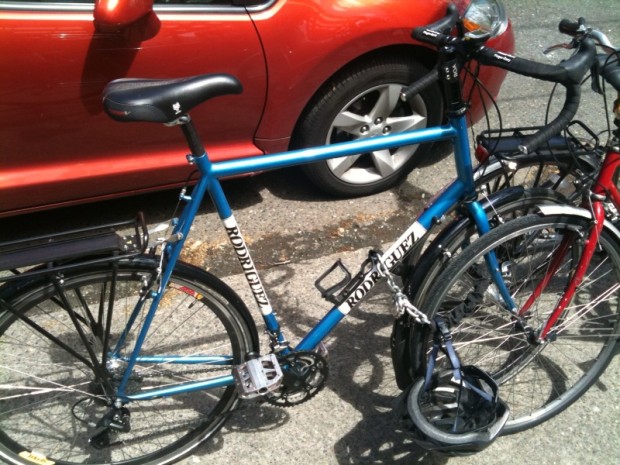 The Rules are a living thing; a set of truths that have been captured but which do not represent a comprehensive record.  They speak to whole larger than any of us and thus will never be complete. Indeed, we will always need to read between the lines of – to feel – The Rules in our pursuit of them.

Take, for example, Rule #57: No stickers.  Simple, logical. Obviously, this is aimed at stickers applied after-market by a consumer attempting to self-identify with a group of some kind.  Frame decals and safety stickers applied by the manufacturer are obviously not in violation, while, on the other hand, if one were to put a label on your handlebars that reminded you how what the various levers do when shifting, that probably falls into the “Maybe Not” category and should never need to be recorded in the Canon.

When plodding around town, my eye always seeks out bicycles and I make quick, almost subconscious assessments of how compliant the various bikes are with The Rules.  When I find sufficiently egregious violations, I generally snap a picture of it, just in case I need it in the future for court hearings and such.

This particular violation was seen while a Velominati Scouting Team (consisting of Jim, John, myself and various friends and family) were out doing a test-ride of equipment prior to our Big Ride on Saturday.  I took these photos for the bike’s violation of Rule #44,  Rule #45, Rule #48, Rule #49, Rule #57, and Rule #61. Surprisingly, there was adherence to one of the more subtle Rules, Rule #40, but I’m guessing that was by some sort of freak accident, since the owner of this bike can not possibly have been attuned to it.

Upon closer inspection of the handlebars lurked a perfect example of why The Rules will never be a comprehensive Study Guide to cycling’s canon of etiquette, for this violation should never need to be explicitly documented within it’s texts, a Velominatus should “feel” it: 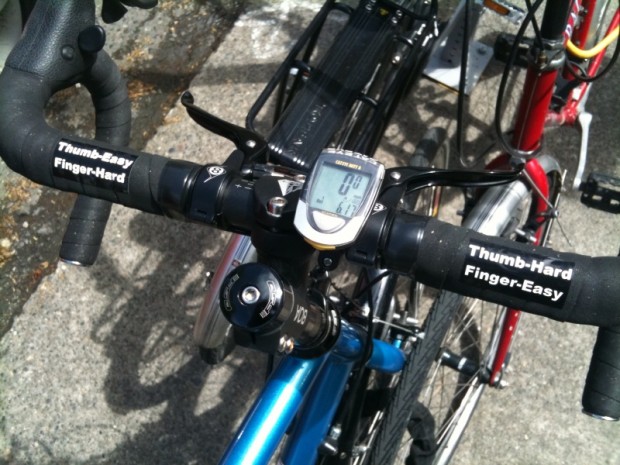 These particular stickers prod at the psychology of the bike’s owner: Thumb Hard, Finger Easy. (There might also be a moral lesson hidden within the meaning of those stickers, but I’m not smart enough to grasp it.)  I’m almost impressed by the fact that both stickers have it right despite the insistence of those damn Italian developers of the Campy Ergo levers to make both levers work the opposite way.  I can only imagine how many iterations it took to get the labels right.  Further, the bold, white font does nothing to the label’s subtlety; this is the work of an individual making a public declaration of their inability to absorb the workings of a simple mechanical device.

The only explanation I can come up with is that this bike belongs to a compulsive labeler; I can only imagine what other stickers this person has surrounded himself with to clarify the obvious.