Mates are supposed to be just that; mates. They are meant to be supportive, to help you out when you need them, to make your existence a good experience.

My mates want to see me suffer.

A couple of these 'mates' (who shall remain nameless, but not shameless) thought it would be a good idea to enter a little race in October. I don't know if it was the realisation that they had shelled out $120 for the privilege of riding 192km over some of the nastiest climbs in the Coromandel, or the need to do some actual 'training' so as not to be reduced to a blubbering mess on the side of the road, but they encouraged me to join them. Encouraged is probably too nice a word; badgered, prodded, levelled all kinds of accusations as to the status of my manhood would be closer to the mark. And, being one to rise to a challenge (or at least just to shut them up) I took up the offer of a six-hour sufferfest with a good dose of false bravado.

That's when the mind games began. Not between them and I, but between me and I. Having ridden and raced over similar lengths of time on both tarmac and dirt, I knew that the actual training and completing the event shouldn't be a problem. Oh no, the mental block I was having was an equipment-based one. I've been happily cruising around on the Bozzie, loving the mix of old-school Kiwi steel and modern Italian carbon. It's probably the road bike I've loved the most. But she's no featherweight, and most of the riding she's been doing doesn't involve long, steep, relentless climbs. My head was starting to rebel against the legs. I needed a solution. A cheap one.

A workmate had a CAAD5 'Dale frame sitting around doing nothing, and at $200 I could build a light , cheap climbing machine that would do the job at hand. But I've never been a big fan of the marque, and although the Simoni styles were cool, I started scouring TradeMe and eBay for something alloy, slightly older, but with a certain amount of 'cool'. A couple of brands sprang to mind; a mate back in Aussie had a Klein Quantum, it was a bike that I liked the look of, and I knew it was light. There were some cool builds floating around the net which were appealing. Of course, a second opinion was needed, so an email to the Big Dutchman was drafted. No more than five minutes after sending it, I had an epiphany.

A second email was on its way to Seattle, but while it was heading Stateside, a rather strongly worded one was returning Down Under. The big man wasn't impressed.

Don't get a fucking Klein!  Jesus. Did someone hijack your email account?  WTF are you thinking?  Get a used Merckx Scandium like Museeuw won Roubaix on for fucks sake or a De Rosa or a Pinerello Prince like Ulli rode if you're going to go Alu.

A fucking Klein.  Jesus.  What's the matter with you?

Could he read my mind? Was he going to track me down and beat me? Are Kleins really that bad?

My suggestion of the Team SC had reached him by now, and I had saved my bacon from another verbal assault. The language was still as 'fruity WHERE `id` = but the sentiment was more at ease with my choice of steed.

THANK FUCKING GOD YOU CAME TO YOUR SENSES.

YES. Get one of those.

And so the search began. And just as quickly, ended. Merckx was looking out for me. A Domo Farm Frites Eddy Merckx Team SC frame and fork, in my size, was right there in front of me. There was really no choice in the matter. A quick check with the big man, and a stoic “BUY IT” came back, as if I really expected any different. He even offered to pony up some of the cash just to make sure a Klein wasn't getting anywhere near me.

I contacted the seller in Brisbane, Aus, and made an offer under the Buy Now price. We had a bit of to-and-fro before agreeing on a fair price, and the shipping to NZ. Mark didn't really want to send it overseas, but could see how keen I was on the frame and had it boxed and sent before I coud say 'Wilfried Peeters'. After a week I still didn't have the frame, Mark was making enquiries at this end, and we found out it was stuck in Customs in Auckland. Now, we all know that government departments are evil, and this one was living up to their well-earned rep, slugging me with nearly $200 GST… for what? Because they can.

I just wanted my frame. And when I finally held it in my hands, I could feel the spiritual significance of such a lauded piece of cycling folklore. But something didn't seem right. It looked a bit small. The tape measure came out and my 57cm frame was really a 56. Or a 55, depending on where I held the tape. A flurry of emails, a barrage of fit tests with just wheels and saddle and bars, and I wasn't convinced it was going to fit. Mark was convinced otherwise, as he is a good two inches taller than me, and assured me that the slack seat tube angle would put me in the right position. But he also kindly offered to return my money if I wasn't completely happy. A gentleman and a scholar.

The next day, after a night of web surfing for geometry charts, forum posts, and photos of The Lion on board, I was ready to do some more in-depth testing. I fitted my cranks, and videoed myself on the fit computer at work. It didn't look too bad at all. The Dutchman was also persuading me to 'go small' on the frame, maybe because he can't find one big enough for his own needs? With a 130mm stem mounted, I was happy that I could make it work. The rest of the parts were stripped from the Boz, and The Lion's bike with The Prophet's name was completed. A quick ride up the street turned any doubt into a emphatic 'fuck yeah'.

But what of the reason I undertook this whole process for? The weight… With pedals, two cages and my not particularly light 'Classics' wheels, she came in at 7.8kg. Over a kilo-and-a-bit shy of the Bozzie's mass. All there was left to do was get the right saddle, mount the V-Meter and get riding. 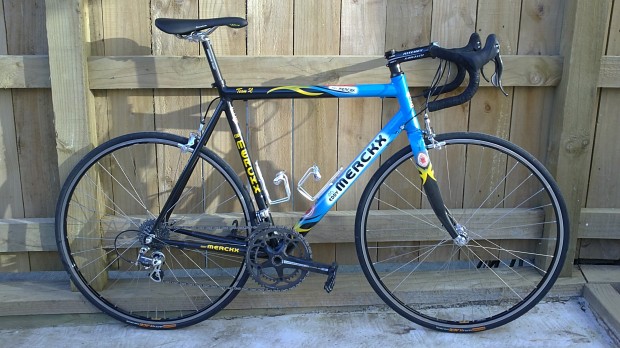 This bike is special. I'd read all the gushing praise from the likes of Competitive Cyclist, Ten Speed Hero and Elcyclista, and its palmares spoke for itself. A bike that could dominate for three years at Roubaix, go on day-long breakaways in Paris-Tours, and climb to victory atop The Giant of Provence. As I sprinted over every rise, I was Freddy Rodriguez. Hammering over anything rougher than smooth blacktop, I was The Lion, Servais, PvP. Up the climb to home, getting out of the saddle and rocking it side to side, I was Reeshard.

Bikes should have special character, and this one does, in spades. The decals on the down and seat tubes say it all. Handmade by The Prophet, in the spiritual home of cycling.