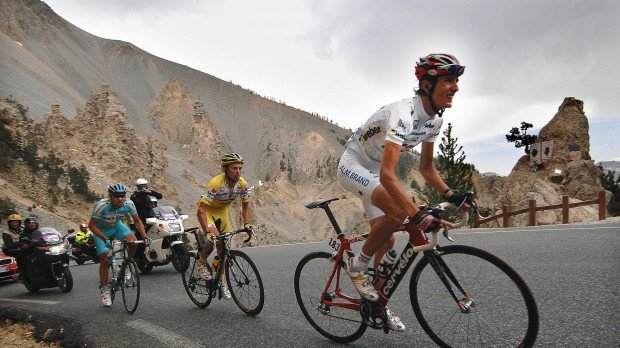 Those of you who have been studying our catalog of The Rules will have noticed that eyewear is to be cycling-specific, and should always accompany you on your rides.  There is a functional reason for this: your eyes are a valuable asset which you want to protect from UV rays, debris, and wind.  There is also a stylish reason: in this age of near-universal helmet usage, your helmet will look way too bare on your noggin without the balance provided by your eyewear.  (It is not acceptable, by the way, to wear a full beard as a counter-balance to your helmet.  The only “cyclist” ever to wear a full beard was that Russian Guy in American Flyers, and I think one look at that guy will explain to you why that doesn’t work.)

I have cultivated a life-long obsession with finding the perfect pair of sunglasses.  It started when I was a kid, buying authentic imitation Oakley Blades at the local Fleet Farm so I might look a bit more like my childhood cycling hero, Greg LeMond.  I ran through lots of cheap pairs that looked like Oakleys (but weren’t) until I was perhaps 13 years old and I bought a used pair of old black Blades from my dad who had just bought a fluorescent yellow pair of Mumbos.   I remember sitting in my room, mesmerized by the iridium lens and running my finger over the white “OAKLEY” logo on the earpiece.  I was well on my way to looking like a Pro.

But eyewear satisfaction proved temporary and elusive.  By the time I owned the Blades, they were already terribly outdated, with the the Mumbos replacing the Razorblades, which replaced the model I had.  My quest continued.

Eventually, I purchased my first pair of Shots, beginning a 15-year love affair with Briko.   In the Nordic skiing microworld, these babies were the shit because they had the full ski goggle-like band that kept them on your head and allowed you to perch the glasses safely on your hat without worrying about them falling off during a race.

This seemingly minor detail inadvertently changed my life, as I became consumed by the details of how best to wear hats, and how best to pair your sunglasses with them.  In skiing, it became a very carefully studied system of wearing your hat using a technique I call the Three-Point System where the hat sits just above the point where your spine enters your skull, covers the tips of your ears, and comes to rest close above the eyebrows.  The sunglasses must then be perched upon the hat at just the right height and just the right angle in order to maximize what my dad always teasingly referred to as “the Pro Look”.  (It goes without saying that “the Pro Look” also involves a carefully cultivated facial expression and a plethora of other accessories.)

This also influenced my technique for wearing cycling caps as well.    (I hereby formally confess to breaking Rule #11 as a reckless, fool-hearty youngster.)    When the cap was worn visor-forward, it could not be too high or low, and could never be tilted too far forward or backward, with sunglasses to be be placed just above the brim.  If the cap was worn visor-backward, its positioning bore great resemblance to the Three-Point System, with the back low to the eyebrows, sides just above the ears, and the visor just above the nape of the neck.  The sunglasses in this configuration were always perched high up, towards the top of the brow.

The problem with the Briko Shots was that, unless your name happened to be Mario, they looked terrible when used on a bicycle (and thus came dishearteningly close to breaking Rule #25), and as such I ran through various iterations of Briko models and spent gobs of money in my quest for the perfect pair of riding shades.

The matter has been further complicated by a related ailment: I am overcome by a feeling of overwhelming claustrophobia caused by wearing sunglasses when I’m exercising at my maximum.  This was true during my ski racing career, and is still true today, whether I’m riding or skiing.  If I’m hot and fighting to get enough air into my lungs, having sunglasses pressed up on my face and pushing down on my nose is a feeling I cannot tolerate.  At the same time, I’m sensitive to light and wind in my eyes, and as such generally need to wear them.  Without getting into this too deep, I’ll just state that it is important for me to easily and quickly take my sunglasses on and off.  The problem was solved for me when ski racing by the Shots’ ability to easily, quickly, and securely get shoved onto my hat, but it has been an ongoing problem for me as a cyclist since there has never been a good place to quickly and easily store my sunglasses when I’m hot.

Until recently, that is, when helmet manufacturers started building helmets that receive the earpieces of your sunglasses with little or no hassle.  Unfortunately for me, my Brikos at the time had earpieces that didn’t slide properly into my helmet and for this offense were cast aside.

Based on evidence that the Pros were able to stick the Oakley Radars into their helmets with no issue and still managed to look cool, a few years ago I decided to return to my Oakley roots and buy a pair.  (White, of course.  Because that’s the coolest color.)  Ever since, I have been absolutely amazed at how good these sunglasses are.  The hydrophobic surface coating keeps water beading off them, so when you get sweat splashed on them, can spray them with your water bottle and they clean right up.  If you overheat when climbing, you can pop them into your helmet and maintain your Pro Look.  The Radars are the perfect cycling eyewear.  At long last, mission accomplished.

Imagine my amazement, then, when Oakley released the Jawbones.  They are ugly and look like they’d be even hotter than normal sunglasses, with no open-air system between the glasses and the cheek.  Besides, the dual-color version that many pros have been sporting is no good whatsoever and should be abandoned as quickly as possible.

What was the deal with the Russian guy in American Flyers, anyway?  That guy was a jerk.

50 Replies to “Radars and Jawbones”