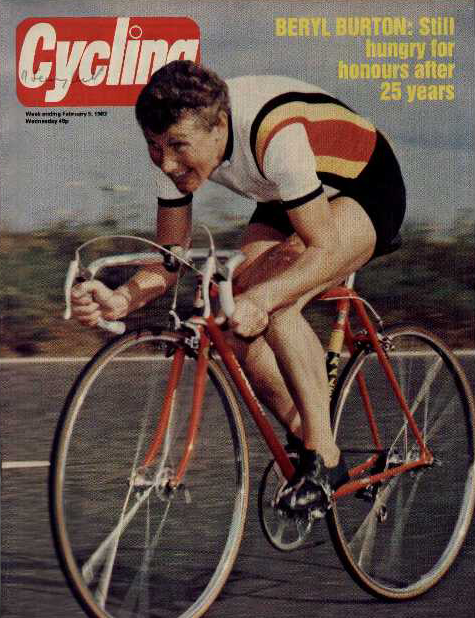 @RobSandy has done us a real favor with this article. The old gits among us remember Ms. Burton as a force-of-nature cyclist. She loved her bikes, she loved keeping her bikes working perfectly and she loved hauling ass on her bike. What’s not to love?

There is a lot talked on this website about being pro, being a badass, the permutations of Rule #5 and Rule #10, but if one small anecdote can encompass all of these things, I like to think it would go something like this:

It’s the 17th of September 1967, and the National Champion Mike MacNamara is riding in the British National 12-hour time trial.  He is in great form and puts in what would be a new record distance of 276 miles.

Out on the course, however, he is surprised to find himself being overtaken, even though his next competitor started 2 minutes behind him. He is probably slightly more astonished when the cyclist passing him turns out to be a woman. As she passes, she digs into a bag in her jersey pocket and offers him a liquorice allsort.

“Ta, love,” he mutters as she cruises past and away into the distance.

The rider was Beryl Burton, on her way to setting a new record of her own, 277.25 miles in 12 hours riding at an average of 23 miles an hour, or 37.18 kph. As Mike MacNamara became aware at the finish, this was not only a women’s record, it was a national record (beating his own superb effort that day). Moreover, it is a record that still stands to this day.

“Poor Mac,” Burton later wrote. “His glory, richly deserved, was going to be overshadowed by a woman.”

Beryl Burton is probably one the greatest British cyclists in history, whether or not you make the distinction of her having been a woman, and allowing for the fact that virtually no one has heard of her. In the era before professionalism (which was offered to her during her career and refused repeatedly), when road races were banned on UK roads she was dominant in time trials. Her record for 10 miles (21 minutes, 25 seconds) stood from 1967 to 1993 – Twenty years. Her record over 25 miles (53:21) stood for the same amount of time. She also held records over 30, 50 and 100 miles which all stood for over 10 years. She was a different breed.

Yet even during her peak she was pretty much unknown by the British public and wider world. During her stellar year of 1967 she came 2nd in the BBC Sports Personality of the Year to the boxer Henry Cooper, which along with an OBE was her only public accolade, despite seven world titles, 96 national titles and being the best British all-rounder for 25 consecutive years.

Phil Ligget commented on Beryl’s achievement that year and the lack of acclaim which resulted;

“It was a coveted record, [and] had it been any other sport other than cycling, say it being a football icon scoring three goals against Brazil, it would have been front-page news. It almost slipped under the doormat, apart from the cycling magazines who knew the enormity of what she’d done. And as far as I know, it has never been done anywhere in the world either, where a woman has got up and beaten a man’s record in the sport.”

So, this is my case for Beryl Burton to be recognised as a total badass, and made an honourary Velominata. She was awesome.

But there is a sad epilogue to Beryl’s story, which perhaps epitomises Rule #5. Beryl suffered a childhood illness which left her with a scar on her heart, and one day in 1996 while she was out riding, delivering party invitations for her 59th birthday, her heart failed, and she died. On the bike.