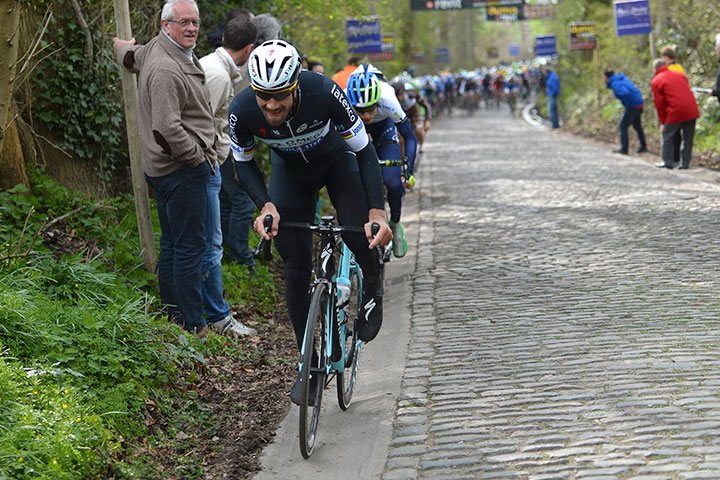 It is well known that knee warmers look better than leg warmers. Which isn’t to say leg warmers can’t look the business as well, but they will never look as good as knee warmers. The science is very clear on this.

Nevertheless, I’ve been enjoying wearing full leg warmers even when the weather doesn’t necessarily require them. Something about the orange bands getting nice and cozy with my orange Bonts has me mesmerized. But, since they were designed for the Classic V-Kit with the chevrons running along the cuffs, they don’t properly match the VLVV V-Kit. Which presents a small challenge because then the cuffs on the jersey doesn’t match the cuffs on the leg warmers, so that shit needs to be covered up. Which means if I’m riding in that kit with leg warmers, I’m compelled to wear overshoes irrespective of the weather. Which are also orange and also mesmerizing.

This is all very natural, there is nothing mysterious in it.

But what has always been mysterious is how a rider with the kind of impeccable taste, style, and class like Tom Boonen could suffer the indignity of wearing his leg warmers over the legs of his bibs. Everyone knows they go under the bibs and booties, and over the socks. Basic laws of Physics, right there with gravity and e=mc2. Tom often wears them properly in training, so it is obvious he understands this. It has, until recently, completely dumbfounded me.

Thanks to me being a strangely obsessive individual with a unjustifiable willingness to ask near-strangers to clarify things that should not be kicking around in anyone’s head in the first place, I have managed to gain clarity on this matter. One evening during the Rouleur Classic at a noisy hotel bar, the question was loudly posed to none other than Chris Juul-Jensen, whose approachable nature made him seem like the right guy to ask. He raised an eyebrow and immediately agreed that it looks completely rubbish and he would never do it himself. But he went on: it turns out that the big boys in the bunch do this as a statement that their race does not start until 50 km from the finish. In a race of 250 kilometers, only the last fifth matters, and it is more important to Look Fantastic on the finish line than on the start line. Particularly if you happen to be the one with their arms in the air. Until then, the gunslingers are just sitting in and trying to stay warm while the domestiques are flogging themselves to bits on the front.

If you’re a gunslinger, and you’re bringing your game to the party, then this is how you tell the wee folk that you’re what’s going to happen.