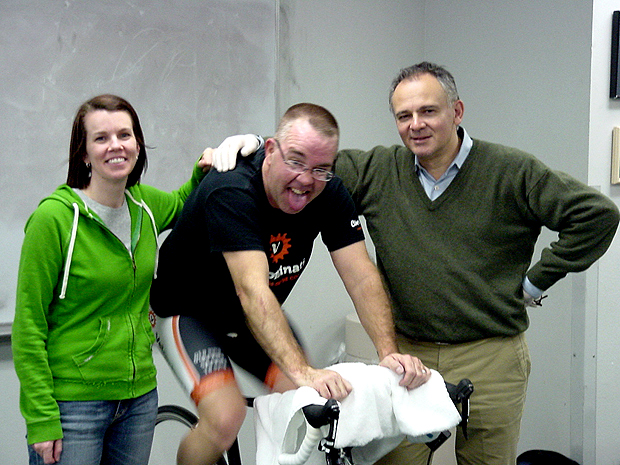 Our lives as cyclists are made sweeter by the occasional intersection of our world with that of professional cycling. Spotting a pro out on the road, stumbling across a team training ride, sneaking onto the back of said team training ride, even stealing a conversation with a pro or ex-pro can leave a lasting impression and provide a cache of tales that will in all likelihood become more glorious with each telling.

Chance encounters with Pros are one thing, but to the Velominatus, the other people associated with the professional cycling world who keep it all moving forward are perhaps even more meaningful. The team mechanics, soigneurs, physios; these are the people who devote their life to the sport and work tirelessly and without headlines that their pedaling counterparts receive.  Perhaps they like it that way, but these are people whose love for the sport runs deep and whose roles are critical to keeping the sport alive.

Cyclops recently had the opportunity to have his Lactate Threshold tested by the head team doctor for Team BMC, Dr. Max Testa. Personally, having my threshold tested is kind of like checking my bank account; I was happier before I knew the truth, and now I have to deal with reality again. Cyclops doesn’t seem to be influenced by these same concerns and, apparently, finds some motivation in the prospect. To each their own.

Even though my life has revolved around bicycles and racing (in one form or another) for most of my life I would not say that I became a true Velominatus until just recently.  I was always floating around just outside the “inner circle” because I treated cycling just like all the other things in my life – with a sort of casual interest that belongs to one that has a level of natural talent that makes most things easy but doesn’t allow for an excelling at anything in particular.  I never really applied myself if things got serious – I would just move on to the next interest.  But road bikes always seemed to be just back there in the white noise of my life.

This all changed a few seasons ago when I was out on a ride with one of the local hammers and he casually remarks “You’ll never beat me.  You don’t train.”  I didn’t really think much of it at the time but I guess it planted a seed deep down in my psyche because all of a sudden I found myself doing intervals and actually looking forward to slogging it up the local big climb.

Last year was my first year of serious (for me) training and I saw marked increases in the amount of the V I was able to dish out but I wanted to take it to the next level.  Enter Dr. Massimo (Max) Testa. If you aren’t familiar with Dr. Testa – “You Americans are so formal over here.  Please, it is Max.” – he is an Italian sports physiologist that has trained the likes of Levi Leipheimer, George Hincapie, Team Mapei, and the 7-Eleven team, to name a few and is currently the head team doctor for BMC.

Max lives near Salt Lake City and has professional ties to Dr. Anthony Joseph, an ISU (Idaho State) sports doctor that helped me with some knee issues.  Dr. Joseph brought Max up here to do Lactate Threshold testing for the locals.  So here’s a little ol’ fat Cyclops getting a chance for some world class direction in my training, and have some concrete numbers on which to base my training so I was very excited about my “date” with Max.  Ironically, the day before the testing was Valentine’s Day but I resisted the temptation to surround the tub with some of Frank’s candles as I ran a bath in preparation for the “shaving of the guns”.

I’ll get to the results in a bit but let me say that Max is an extremely nice person.  He talked with everyone as if they were the best of friends.  The seminar he gave after all the testing was done was very informative and he stayed afterward and answered individual questions for about an hour.  Each question was answered with a passion and thoroughness that let you know that he cared for your individual concerns.  Each answer was usually accompanied by an anecdote too.  One of which I would like to share with the Velominati.  Somebody asked a question relating to TTing and Max told the story of when he asked Eddy Merckx to give Raul Alcala some TT pointers.  Eddy tells Alcala to “Make sure that you go out as fast as possible because you’ll lose valuable seconds if you don’t go out as hard as the others.  Then you must make sure that for the last 2-3k you are going as fast as possible so that you can gain time on those that are fatigued and let up at the end.”  Alcala then asked Eddy “What about in between?”  Eddy’s response?  “Go as fast as possible.”

Another little side note – the girl in the picture above is Kari, Max’s assistant.  I was talking with her about Team BMC and mentioned that they are one of my favorite teams because I like Cadel Evans and Big George.  She gushed about how nice of a person George is and that it is nice when the people you admire are decent people.  She didn’t say a word about Cuddles.  Hmmm.

So now for the moment you’ve all been waiting for with baited breath.  How does the Cyclops stack up?  Well, I’m old (50 in 6 months) and fat (down 16kg from the fattest but I need to lose at least 7 more kilograms to be where I want to be) and it is February in Idaho so please be merciful to me.  I put out 2.7 W/Kg – the average person puts out around 1.5 W/Kg. and the pros are putting out 6-7W/Kg.  At my current LTHR of 146bpm I’m putting out 215 watts.  When they stopped the test I was putting out 250 watts at a HR of 152bpm.  I was a little disappointed with the numbers but at least my “Lactate response is consistent with a well-trained cyclist” – I think they threw me a bone.  Basically I fall right in line with your average Cat 5.  But now I have some numbers, some motivation, and some direction (train more in “Zone 3”).  I’ll have to do a field test in a couple of months to see how much I’ve improved.

By the way, in the three times I’ve been up against the “local hammer” since the casual remark I’ve placed higher than him twice (one was a 1st place).  The one time he finished higher than me I was closing the gap on him on a mountain top finish but ran out of road so he finished about a minute ahead of me.  But overall I got about a two minute lead on him in our little Tour de Testosterone GC battle.