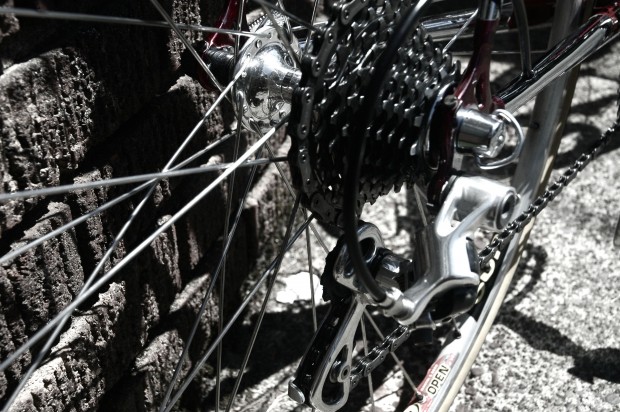 We all have our obsessions, and principle among mine is the pursuit of silence when it comes to my machines. Not every sound is a bad sound, mind you; the hum from the tires, the growl of a carbon wheel under acceleration, the crisp click of a shift – these are sounds that set my heart alight. But sounds such as a lazy creak or metallic click – particularly one emitting in time with the pedal stroke – these sounds creep into a dark corner of my psyche to stir an anxiety usually reserved for lonely thoughts in the dead of night.

The sounds characterized as those that require silencing have a variety of causes, some minor and some critical. The minor causes generally spring from an ungreased, loosened, or dirty part; a bolt hiding somewhere on the frame perhaps, a quick-release skewer, maybe a spoke. A more serious cause might be a tear somewhere in the frame or rim, or perhaps a worn bearing. What these sounds have in common is that they can be incredibly difficult to pinpoint; the most elusive sounds are rarely reproducible in the workshop and thus can only be identified while riding. The worst are those that only emit from the machine during an intense effort, with oxygen debt providing an unwelcome distraction to trying to debug a sound.

The causes of these noises are difficult to isolate because bicycles are made of long tubes and most modern bikes also often have large-diameter tubes of irregular circumference. The problem with long, irregularly shaped tubes is that sound loves to travel down them like it does a megaphone, allowing it to amp up and amplify along the way, emitting from a point far from it’s origin.

Because of this, one is forced to take a methodical approach to isolating the cause, starting with the most likely and working up to the most remote, testing only one remedy at a time until the offending source is found. This means the process is often too detailed and lengthy for the mechanic at your favorite local bike shop to pinpoint. Not for lack of skill, mind you, but for the simple fact that it would be too costly in terms of labor, and the shop mechanic likely has better things to do than listen to you prattle on about a tiny creak that emits from somewhere between your front and back wheel only while going up the steepest grade in town. It also has the associated problem that, assuming you’re insistent enough, they will wind up moving, changing their phone numbers, and travelling through water so you can’t track them. Believe me.

You’re left to your own devices in this matter, which means you’ll need to learn to maintain your bicycle. Which is just as well, since as a Velominatus, it is your duty to love and respect your machine and there is no better way to do this than to maintain it yourself. As with everything thing, the best way to learn is to find a Cycling Sensei who is willing to guide you. They will likely start by putting your bike on the stand, strip everything down to the bare frame, and build it back up. And then do it again, this time with you leading, not them. And again. And maybe one more time. In fact, lets make it an even V times.

At this point, you should have a basic understanding of the art of bicycle maintenance, and the rest will come from experience. By “experience” in this case, I mean mostly the bad ones, punctuated by glorious success. You’ll make mistakes. You’ll strip the delicate threads from your gorgeous aluminum derailleur. (That’s just an example, I did not strip the threads out of my dad’s brand new Campy* Euclid front mech when I was 13.) But experience, assuming you learn from all those mistakes, will feed your knowledge and serve as an excellent way of understanding empirically the right way to do things. And when you get it right, and the sound disappears, it will be all the more rewarding.

In the end, you’ll also build a lexicon of sounds and their causes, allowing you to apply a remedy quickly to a sound that previously may have taken several weeks to identify. One of the most challenging (and infuriating) creaks I’ve wrestled with was one that only ever produced itself when I was climbing out of the saddle. I immediately identified the sound as likely being that of my front skewer creaking. I cleaned it, applied some lube, and tightened it up, fully expecting the sound to disappear. But it didn’t. On and on I wrestled, becoming increasingly frustrated with the sound until finally I discovered that the bolts in my downtube cables stops had loosened slightly. In the end, a quarter-turn from an allen wrench was all it took to vanquish the sound, and with it several weeks of frustration.

On the rare occasion that your knowledge and experience fail to isolate the sound, take your machine your most trusted shop mechanic. At this stage, you should have a working understanding of the various conditions that cause the sound to reveal itself, and armed with this knowledge, your much more experienced and skilled mechanic should be able to identify the sound for you in no time. Watch how they work, and learn from them. After switching to Campa a few years back, my drivetrain started making a sound I’d never heard before, only when I was riding in particular gears. I spent ages trying to find the cause to no avail, finally bringing it in to Speedy Reedy. Within minutes, Gerick found that the lockring on my cassette had loosened; a quick twist of a wrench, and I was on my way, pedaling happily in silence. (And always leave a tip for them in the shop tip jar. If the shop doesn’t have one, bring a jar and put a tip in it and leave it there. Or bring a growler of your favorite beer, empty it together with the mechanic, and use the empty vessel as a tip jar.)

One of the most enjoyable and rewarding aspects of La Vie Velominatus is wrenching on your machine; learn to do this skillfully, and you’ll open the door to a world of silently-running and impeccably shifting machines. A greater joy can scarce be found.

*Since I’m talking about a MTB group, I thought it best to refer to Campagnolo by the more Americanized “Campy” rather than the Euro “Campa”.