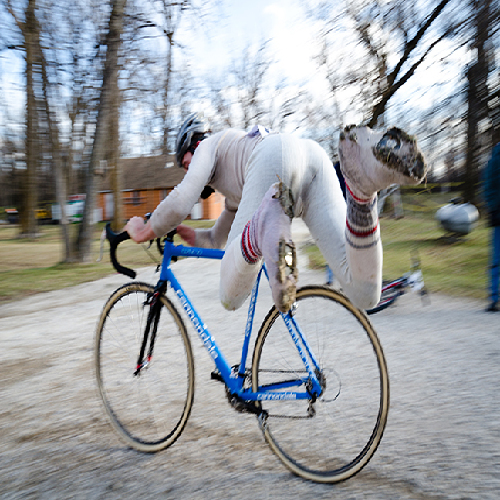 I hesitate to file this in the Guest Article category. It would be better filed under fellow un-rewarded pirate cycling-site writer, if we had such a file. @winnipegcyclechick does all of her site’s writing, her graphics are usually hers and much too funny. Frankly, she makes me sick. And, AND, she can make the jokes we can’t make lest we be accused of being misogynist juveniles. Yes, only part of that hurts; being juvenile has worked so well for us. Her website deserves frequent visitations. We are fans.

Your in Cycling, Gianni

Must ride like eagle, feeling like Superman, one day per week on bike, or training program is shit.

– Advice given to Greg LeMond from his junior coach, Eddie Borysewicz (From The Rules)

My first introduction to cycling culture was in the early 1980s – a simple and carefree time when boner jokes were de rigeur and life experiences were measured in bases. Back then, life was all about hanging out with your friends away from the prying eyes of your parents. It was an era in which social interaction required leaving your house and your bike was your ticket to freedom.

On warm summer nights I would wolf down dinner, jump on my 500 pound ten-speed, and tear down to the creek near my house to hang out with the BMX kids – who were not necessarily as cool as the jock kids, but were still mostly cooler than me. We were dangerous middle-class suburban kids who smoked, gave each other hickies, and listened to AC/DC. We were, according to our admittedly limited frame of reference, Super Fucking Rad. The boys would spend all evening practicing their tricks and jumps in a natural dip by the creek bank, while we girls sat watching, smoking menthol cigarettes and drinking cherry Slurpees laced with ill-begotten vodka stolen from the velvet-lined bars of our parents’ basements. They would practice the same move over and over, until they had either mastered it or deemed it impossible, then move onto something incrementally harder. If they impressed us, we would show our appreciation the way only teenage girls can, and appear only moderately less disinterested. If they crashed, we were merciless. 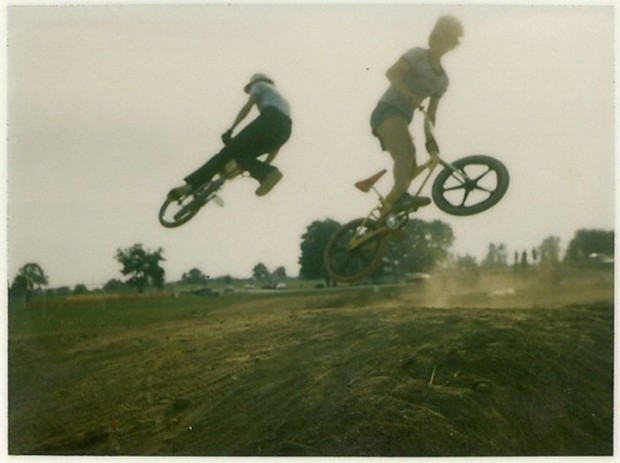 Totally engrossed in the manly pursuit of trying to outdo each other, the boys paid us girls little attention. Sometimes they would line us up like cordwood at the edge of the dip so they could jump over us with their bikes. In spite of the inherent danger and occasional mishap, we happily obliged. This was as close to flirting they came with us. If a boy was particularly enamoured with one of the girls, he might be so bold as to throw her, kicking and shrieking, into the creek. This was a guaranteed trip to second base.

I don’t know why, but it never occurred to any of the girls to ride – not even the butch and sporty ones. Maybe it was because we didn’t have the right bikes, or our maybe our jeans were just too tight. Maybe it was because we were too shy and didn’t want to look stupid in front of the boys – who were, of course, just stupid boys and probably wouldn’t have cared anyway. In any case, looking back now I know that was a real shame.

Years later, when I discovered and fell in love with road cycling, it bore little resemblance to those halcyon days of summer radness. Bases have been replaced by watts, scientific elixirs of carbohydrates and electrolytes have taken the place of those elicit vodka-laced Slurpees, and whatever privacy and freedom we had has been snatched by the ever-watchful eye of Strava. What remains is the bike, and the occasional need to vomit.

A couple of years ago when I took up cyclocross, I was introduced to a group of boys – sorry, men – who eventually, (and reluctantly for some) broke down the walls of their somewhat exclusive Tuesday Night Ride, and invited me along. For this I was flattered, if a little intimidated. I’d heard tales of these notorious rides. Once, a curious would-be member showed up in full kit for what he figured was going to be a hard-core training ride, only to be treated to a short, slow ride to a local burger joint followed by a beeline to the beloved Klubhaus for pints. Needless to say, this was a test. Needless to say, he did not return. 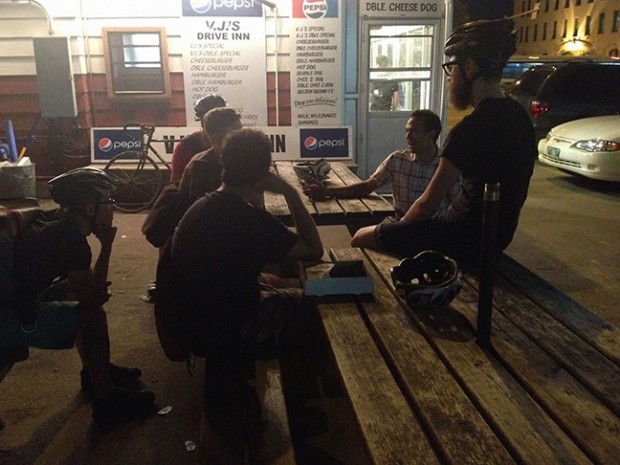 To be invited here is uncommon. To be invited here, and be a woman, almost unheard of. This can mostly be traced back to the group’s origins as a men’s hockey team, who’s late Tuesday night games were followed by pints at the local watering hole. The quintessential Boys’ Night Out. The hockey games have been replaced by bike rides, but are still followed by the immoderate consumption of beer.

And so I abandoned my smokes and my Slurpee and became one of the boys. It was here that I discovered the true radness of riding bike that I had only experienced from the sidelines as a snotty teenage girl. On Tuesday Night Ride, computers are unnecessary and lycra the object of ridicule. Pull out a gel and you better be prepared to wash it down with a shot of JÃ¤germeister. We ride rain, snow, or shine – late at night, without plan or purpose, where paths and sidewalks end, and in places I would normally never dream of riding. We do catwalks and track stands, skids and plenty of trespassing. And yes, the occasional trip to the hospital for some stitches and a tetanus shot. 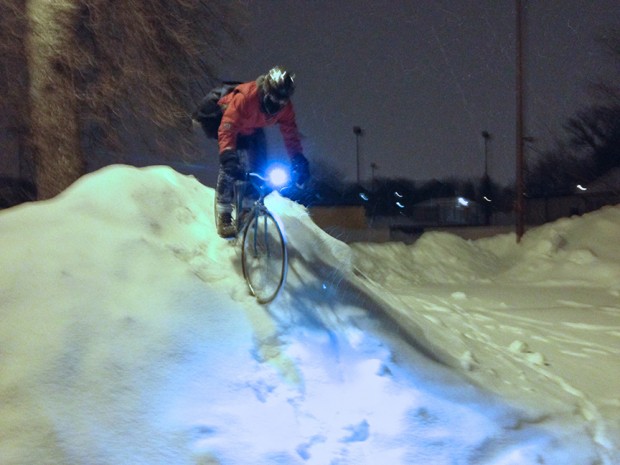 These rides can be brutally hard, since the group is made up primarily of the cyclocross A Race crowd, who take enormous pleasure in trying to rip each other’s legs off, both on and off the race course. And yes, many of them rode BMX when they were kids.

Sometimes we have a plan. It rarely seems good until several days after the fact. We’ve done jittery espresso bar alley cats, tours of downtown parkades during the dead of winter, and scoured a local neighbourhood until all hours looking for the legendary house with a wolf mural painted on the side (no, we weren’t high). We often have off-the-grid cyclocross races where specified laps might involve a gluttonous visit to an Indian buffet, or watching The Big Lebowski (we may have been a little high). All of this either preceding, following, or right in the middle of a lung busting, leg destroying bike race. Sometimes, it’s the hardest ride I do all week, but it’s always the most fun. On Wednesday mornings my legs hurt from the bike, my head from the beer, and my face from the laughs.

Although I am often the only woman, I have discovered the TNR is less about gender than a likemindedness far less tangible than boobies and balls. Sure we like to ride hard, but we also don’t like to take ourselves too seriously. As we like to say, “We are exactly what we are.”

Eddie B. was wrong about a lot of things, but riding like Superman one day a week wasn’t one of them. My bike handling has improved, as has my overall speed and confidence on the bike. And I can tell one hell of a boner joke.