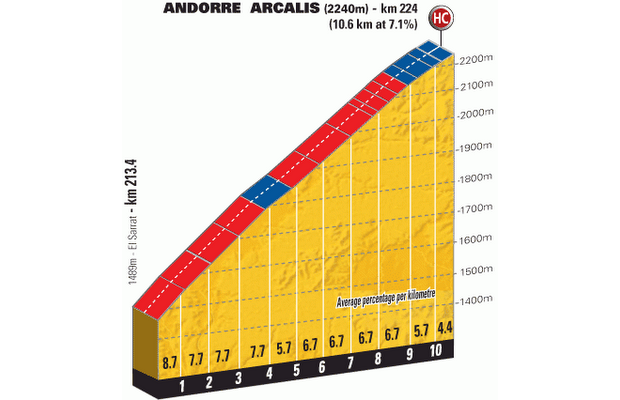 Well, here we are, on the eve of the first mountain stage.   Tomorrow’s stage 7 will climb to Arcalis where we will begin to have a much clearer picture of what the Tour will bring over the next two weeks.

Status Check.  Armstrong is best positioned to take the Yellow Jersey, but his ace-climber teammate sits only 19 seconds behind, with Kloden and Leipheimer within a half minute.  None of those four are weak climbers, and should be able to hold their own on a mountain like we will see tomorrow.  The question is, will it be difficult enough to be decisive?  Will these four riders unify and all ride for the strongest on the day, or will they shatter and race for themselves?

Further down the GC we have Sastre and the Schlecks, all three of whom are close enough to possibly take yellow tomorrow with a strong ride.  It’s impossible to say what will happen.

With that, lets get to some predictions.  No self-respecting cyclist would ever consider using a crystal ball to see into the future – way too heavy.  Personally, I prefer carbon.  Not high-modulus, just the regular stuff with the beautiful weave.  Sure, I can’t see into it to make my predictions, but I certainly love staring at it.  So, bearing in mind that I just said it’s impossible to predict tomorrow’s outcome – and that I am using an opaque object as my “seeing” device, here are my predictions:

Boy, does that weave look great!