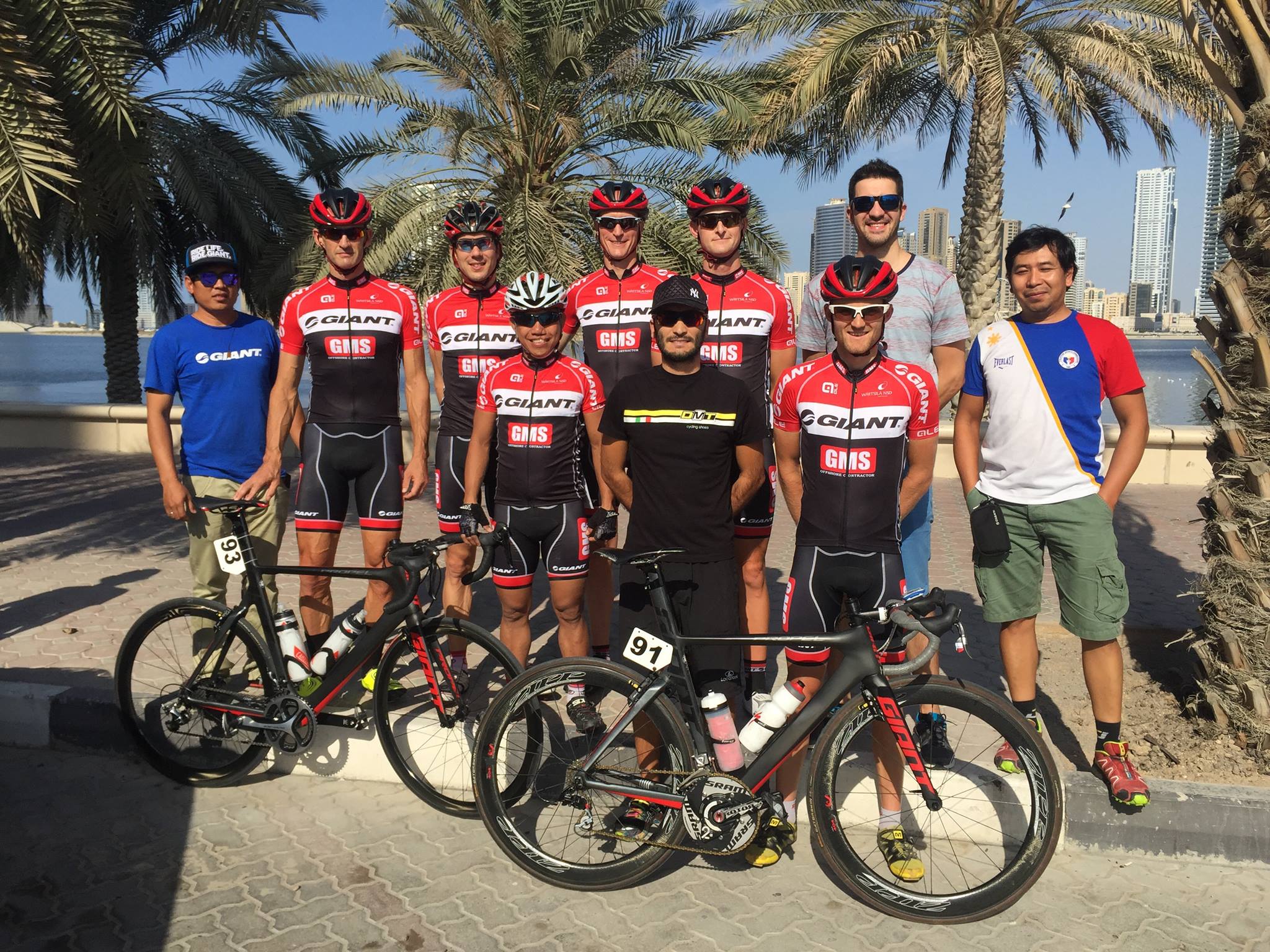 The final installment of @ChrisO’s desert trilogy should have been published last month when Pros were getting sandblasted but it didn’t. Still, we can never have enough personal race reports from our V-Brothers and Sisters. Since Chris submitted this he has broken his femur and is already back in the saddle (?!). The V is strong with this one. Thanks for racing and thanks for writing @ChrisO.

It’s the Rule of Three – from bears and little pigs to Star Wars and Grand Tour, stories work best in threes.

So it is with my ‘pro’ career in the Tour of Sharjah. I’ve completed the trilogy. I gave it my best shot, enjoyed most of it, learned a lot about cycling and myself and now in the very useful local expression khallas… enough, finished, over.

Even three years ago it was a serious stage race, then a UCI 2.2 event and this year attracted an even more international and competitive field. With higher-level tours of Oman, Qatar, Dubai and now Abu Dhabi plus the start of a local Continental pro team the region is very much in the pro-cycling spotlight.

My favourite this year was Team Baby Dump. We feared some horrible mis-translation, but they turned out to be a Continental-level Dutch Under 23 squad sponsored by a chain of mother-and-baby stores. Oh, those Dutch jokers.

There was a team from Montreal (Norco – great jerseys), another from France and the usual mix of African and Middle East national teams – UAE, Kuwait, Saudi, Egypt, Uganda – plus the Algerian Continental squad Sovac, a tough bunch from previous years.

Above them all, Sky Dive Dubai, a Continental team with serious aspirations and the Dubai money to support it and bring in big guns. Like Francisco Mancebo, former Tour white-jersey winner and Vuelta podium finisher and Alexandr Pliushkin, just outside the top 20 in this year’s World TT championships along with a sprinkling of national champions to support them.

Oddly the presence of such a powerful team made the race easier when it was easy, much more like the World Tour races. If Sky Dive were prepared to let a break go, or chase anything down, or want to ride at 30km/h for an hour then OK. Watcha gonna do about it? But when the hammer went down… it hurt.

I was fitter, leaner and more race-ready than ever going into this ToS. My preparation was good, nutrition and recovery was dialled in.

We even had a proper soigneur from Garmin-Sharp giving us daily massage and preparing our race food (see posts in The Rides for details if you’re interested).

One top-tip from the pros – after Stage 2 as we drove to the hotel I got a terrible hamstring cramp sitting in the car. Ricardo, the soigneur, managed to drive and massage me, then he grabbed a safety pin.

“Just stick it in as far as you can near the cramp. It will transfer the pain.”

I did, and he was right, the cramp released with some auto acupuncture.

However even my best preparation just meant I lasted about twice as long before being spat out. Not even spat out really, just losing touch with the lead pack and rolling in with the bunch. Progress for sure, but not satisfaction.

Soon I realised the extent of my race would be to roll along, struggle, regroup and finish. I suspect a similar thought process for many promising riders of far greater talent who jump from domestic competition to the upper echelons of the sport. What started as enjoyment and winning becomes employment and grinding.

So I found a hand-grenade to throw myself on. Day 3 – some of the worst cross-wind I have ever been out in, and anyone who has seen reports of the Tour of Qatar will know it can be brutal in these parts.

The start was on the east coast with what should have been a few easy kilometers and then a big long drag of 10km at about 4-5%. It wasn’t steep but long enough that if a team decided to drill it there’d be trouble, so Jamie our team leader had to be near the front.

A peloton encountering a crosswind works like exfoliation. Riders on the windy side are peeled back like dead skin, until just a long, thin, fragile strip remains.

As we headed towards the climb with a howling wind at 90 degrees we were shedding madly and people were literally fighting for the meagre shelter of the gutter. Sky Dive was on the front but not doing any favours and Jamie had been pushed back, unable to find a place.

“I need to get up the front.” Oh shit, he means me. I get ahead, pushing back up the windy side with Jamie in tow, but the chaos behind the front makes me check my speed and we rapidly fall back again as others come around.

Next I see Emil our sprinter trying to take Jamie forward. Jamie is small, Emil is tiny. It’s ludicrous . Out I come again. We’re 10 minutes from the climb and it’s crosswind all the way. Jamie is on my wheel and I grind forward. Mancebo is on the front and I draw level and hold position. They aren’t going to let Jamie in so I have to stay there, giving them all shelter. For an idea of how strong the wind was, in the first 5 minutes I did nearly 360 watts and my average speed was about 26km/h.

The Sky Dive guys know a doomed fool when they see one and drop in behind me. It also lets Jamie get in but I’m not sure where. I can’t risk them peeling off and putting him on the front but now I can see the turn which marks the climb, and will put the wind more behind us. I decide to hold on. Pushing for the finish. Not the end of the stage, but the end for me.

It comes as I expect. We turn slightly, the road inclines, the attacks start coming and I drop back. It’s amazing how quickly a peloton can go past when you’re spent. With a minute or two to recover I might have got hold of a wheel but the gap comes suddenly and I’m alone. I struggle on for another hour, hoping to pick up some stragglers. I learn later that after the climb it all calmed down and everyone pretty much stayed together for an easy day.

My only friend, the End

At least I had a team car to climb into.

Leaving the race puts an immediate distance between you and your teammates of just a few hours ago. The explanations, the expressions of support – is that pity, or judgement? You’re not part of the excited chatter about who did what, and what will happen next. It’s best to go, not hang around. Khallas.

I could have finished and I’m satisfied with that. Other riders survived by staying in the wheels and I don’t begrudge or judge. ‘Never do anything you don’t have to’ is the cardinal rule of racing. They did what they had to do, and I did what I thought I had to do.

So that’s the closure, and here’s the character development bit. I’ve learned that I want to do more than finish in the bunch. It’s been fun riding at an ‘elite’ level. I’ve picked up great experience and done my bit for the team, even if it was no more than being moving spare parts.

Riding for a team is being a cog in a machine. The effort and training I’ve done in recent years make me want some reward for myself, to race for Me at a level I can compete in. It will be a lot lower level than the Tour of Sharjah but I think I can be happy with it.