Six Days Of The Worlds – Pharmacology 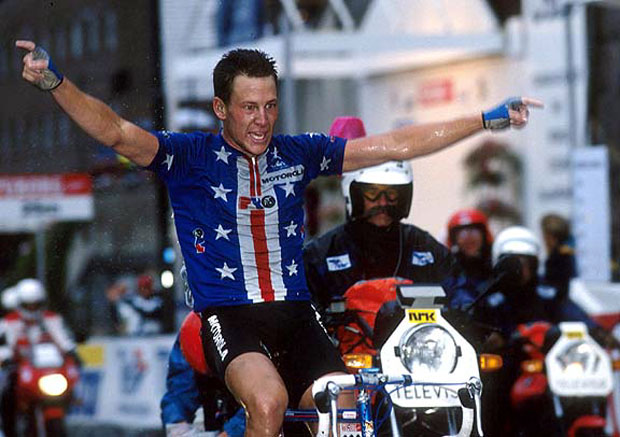 Americans, I think, generally feel they play just on the far side of the boundaries; that perhaps history doesn’t apply to us. We are quick to forget the past and our sights are always focused away from today and towards tomorrow. We are a country who feels it deserves it’s place in the World Order and we carry about us an air that suggests we we will do what we want, when we want.  I think most of the world refers to this behavior as that of “entitlement”.

When Lance Armstrong stormed onto the Pro racing scene, he exhibited all these characteristics – and more – and I can only imagine what the European Pros, steeped in the traditions of La Vie Velominatus, thought of this brash, cocky youngster who raced with open contempt of the history and culture of the Sport of Cycling – on a frame bearing the name of The Prophet, Eddy Merckx.

I didn’t always hate Lance Armstrong.  In fact, I quite liked him in his BC days (Before COTHO); he was fun, young, aggressive, and always willing to light up a race. His ego drove him to fight relentlessly and his salutes were emotional releases of all the tension and aggression he felt during the training that led up to the races. He exhibited all the qualities that make me love a cyclist: he looked good on the bike, knew how to suffer, was willing to attack, and won races no one expected him to win.

While on one hand a massive fuck knuckle, he was also an impressionable kid who was eager to learn le métier. Old sage Sean Yates took him under his wing when he joined Motorola and mentored the little whipper-snapper. Willing to learn and a quick study, he absorbed everything The Great Man could share: the disciplined approach to training, the glory in suffering, the diet and life befitting a professional. Indeed, Young Lancelette even adopted the Rule-breaking practice of wearing shorts of non-Goldilocks length.  (Throughout his career, he would never observe Rule #27.)

In his first full season as a pro, Huevos set his sights firmly on earning the Rainbow bands of World Champion. In the pouring rain on the streets of Oslo, Norway, he fired the Howitzers across a group including the likes of Miguel Indurain and Olaf Ludwig, never to be seen again until the finish. These were the days when races like the World Championships were fought out by the best in the world; when the winner of the Tour’s Yellow Jersey could beat a winner of the Tour’s Green Jersey in a sprint for the silver medal. Armstrong won his title against the best riders in the world: a deserved World Champion.

Riding for the Motorola trade team, Lance raced aboard a steel Eddy Merckx built of the Columbus Max tubeset, perhaps the finest steel tubes every made – and my personal favorite.  This was at a time when The Prophet himself was very much involved in the company and the frames were still hand-built in Belgium.  Merckx also had great influence in determining the geometry of the rider’s frames and in working out their position on the bike. When I look at the pictures of the 1993 World Road Race Championships, I see a completely different rider – one with a powerful stroke and position that bears the influence of a great champion; his style here is vastly different from that which would become the trademark of  Modernicus COTHOticus.

Armstrong always exhibited the characteristics that would later make him a COTHO, but in the early bits of his career, he also demonstrated that he was a determined rider who could read a race, and who could win when he set his mind to it. For that, I give a tip of my Cycling Cap.

24 Replies to “Six Days Of The Worlds – Pharmacology”