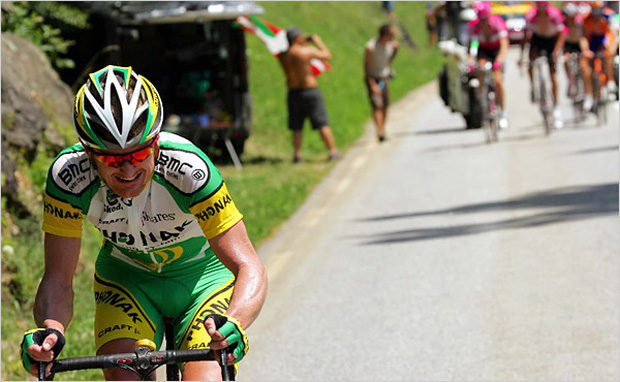 After almost 14 months, the verdict was finally handed down in the Floyd Landis doping case. A three-person panel voted 2-1 to find Landis was found guilty of doping during the 2006 Tour de France, stripped of his title, and has been suspended for two years.

I have mixed feelings about this case: I was never a fan of Floyd’s, but Stage 17 of the 2006 Tour (where he later returned a positive dope test) was one of the most exciting I’ve ever seen, and I instantly became a fan of his.

We were in France during the 2006 Tour, and were at the roadside of the stage to Pla-de-Beret where Landis first took the Yellow Jersey. We then spent the next few days following the Tour on-and-off, catching the news in the French daily paper, L’Equipe, or watching some of the day-long television coverage. (By the way, one of the great things about being in France during the Tour is listening to the commentators go nuts whenever a Frenchman appears on the TV; some random French domestique will get in a breakaway and they immediately start jabbering about the rider’s chances of winning the Tour. Their optimism is kind of sweet, really. )

Then we headed into the Alps for a few days and missed one day of coverage. That happened to be the stage to La Toussuire where Landis cracked and fell more than eight minutes behind. We turned the television on the next day and were completely confused by what we were seeing: the stage had just hit the first mountain, and Floyd’s team was on the front racing as though they were 10k from the finish. Suddenly Landis – who we were surprised to see was no longer in yellow – rode away from the race. We feverishly tried to figure out what was happening, and why Landis didn’t appear to be in contention anymore. (Another odd thing about being in France during the Tour is that unless you’re up to speed on all the French slang around cycling, it’s a big struggle to truly understand what’s going on from the papers.)

We finally figured out that Landis had cracked and lost heaps of time; what we were seeing was a super-hero mission to gain back as much of time as possible. He managed to pull it off, and eventually won the Tour. It was epic. It was inspirational, and we immediately became fans. One of the first things we did when we set up our workshop in our basement when we moved to Seattle was pin up L’Equipe’s issue from the following day showing Landis cruising to a beautiful stage win.

I don’t know if Floyd doped, and doping in cycling continues to be a topic that I’m incredibly conflicted about. Does it matter whether he doped? Was the inspiration I felt that day as well as the excitement over the next few days false because he doped? Not necessarily. That experience belongs to me; just because his performance may have been “enhanced” doesn’t invalidate what I took away from it. I spend my life building software and none of that is real, either – you can’t touch it or prove it exists, but you can still experience it and take something from it.

At the same time, if he doped – and especially if he was doing so while everyone else was clean – then he should be punished. If Oscar Pereiro was clean and got second, then he deserves to be named the winner.

Techniques to pass and avoid doping controls are shared among teams and riders, and the various agencies and labs conducting the doping controls are allegedly bought off by teams to suppress results. That doesn’t even touch on the fact that a huge number of items on the World Anti-Doping Agency’s prohibited substances list – something like 80% – can’t be tested for. Of those that do have tests, many depend on allowable thresholds – including the test for testosterone which Landis failed. In those cases, there is no flashing red light that indicates a positive test; the lab technicians use their judgment and experience to decide if a sample is positive for doping. Although the lab scientists are highly trained and disciplined, the fact that one could claim that the findings are subjective opens the door to questioning the credibility of the results.

The culture, the possibility (or even likelihood) of riders doping without being caught, and the credibility of the tests conspire to turn the fight against doping into a big hairy mess. You have people speaking out against doping and claiming the sport is cleaning up while rumors persist that doping is rampant. And, those riders who do fail dope controls swear they are clean and are wrongfully accused.

13 Replies to “The Longest Case”