With La Vuelta in full swing and the Worlds only weeks away, there are more than a few riders who will be feeling the effects of a long, hard season.  Months of training, travelling and racing take a physical and mental toll that we, as mere mortals, can only begin to imagine.  But without the vital roles of the support staff assembled by the big Pro Tour teams, the riders would find it near impossible to perform at the levels they do all year.  And probably the hardest working, and possibly most important members are the oft-maligned, sometimes forgotten mechanics.

My friend and trainee Velomihottie Rachel is a bit of a cycling aesthete, but she'd never admit that. She will make her own arm and knee warmers, but then fret over whether her Ekynox glasses are too white or not. But she can ride most of us under the table, and with style and modesty. One day she casually dropped into the conversation that her old school-friend was featured in a photo on the Rouleur website. Why is that, who is he? I asked.  “He's a mechanic for the Garmin team.”  Oh, and you didn't mention this before because?

Of course, we here at the Velominati were positively frothing at this connection, and email correspondence was promptly initiated, and an interview kindly granted.  Even though Kris 'Grom' Withington was in the middle of a grueling season, he was still more than happy to answer our (and our community members') questions, some of them typical fare, others a bit left-of-centre.  We tried not to embarrass ourselves too much, but Kris didn't seem to mind at all; that's the laid-back Kiwi style epitomised.

So here is our little chat with 'Grom WHERE `id` = and we thank him for taking the time to lay down The V in word format. 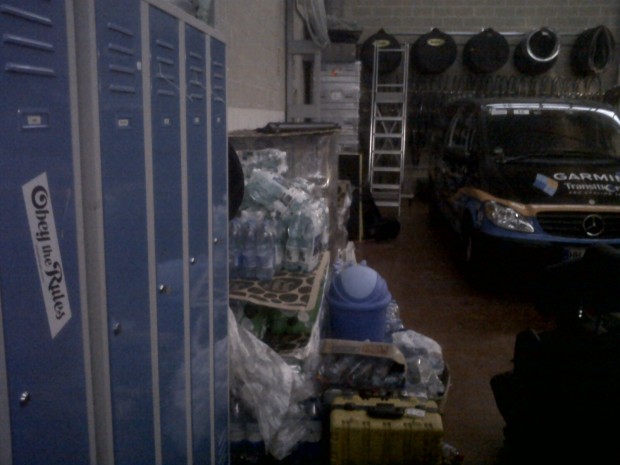 Keepers:  Wrenching on bikes every day for a living, does that make you more or less finicky when it comes to your own bikes? Are they perfect, or do you maintain them as little as you can get away with?

Kris:  I think less finicky, not out of laziness (maybe a little).  But I don't want to be fixing my own stuff when I'm at home unless it's really necessary.  Ride smooth and with a bit of class. Always buy exactly what you want so you don't need to change much, do a good job assembling it and get the good gear as well, pump up the tires and a bit of clean oil on the chain and that's about it.  Of course my road bike has never been out in the rain€¦ So yes I maintain them as little as possible.  Probably like a builder's house eh?

Keepers:  One of the mechs at a local shop in Seattle absolutely hates cutting steerer tubes down. He'll do whatever he can to make sure he's busy with other tasks, leaving that chore to the shop manager. What is your least favorite thing to do when working on a bike?

Kris:  I hate fitting cleats up to the rider's shoes. Most guys will do it themselves but sometimes they leave their shoes at the truck for us to do. I used to be nervous about cutting steerer tubes, now the whole process takes about 2 minutes.  You don't even need to put the bike in the workstand! Maybe it's different with someone else's bike that they have paid money for though.

Keepers:  We have a pretty substantial set of Rules at Velominati, are there any rules of your own that you adhere to strictly when it comes to wrenching?

Kris:  One or two; always use the best quality tools you can afford. I have a set of Allen keys that cost around 100 Euro but there's no way I would use anything else. And whenever you fit up a tubular, make sure it's straight and pump it up as hard as you can for maximum contact.

Also, never touch a mechanics toolbox without asking.  The amount of tools that have magically disappeared over the years from my case is amazing. So now if I see anyone messing in my case, there's going to be fuckin murders!

Keepers:  What is the most quirky request that any rider routinely asks of you (for his bike)?  Will you tell us who that rider is?

Kris:  Well I can't name names, but there are one or two riders who like their saddle slightly off to the left for some reason. And more and more guys are switching to Osymetric chainrings, which suck balls to get working properly.

Keepers:  You're an avid mountain biker (and singlespeeder at that).  Do you keep a mountain bike stowed away deep in the truck when at stage races or is it all work and no play?

Kris:  Before July, no chance. We are full-on at the start of the season, then into the classics, then the Giro, then Dauphine or Suisse and onto the Tour de France.  Once July is behind us though we (and the whole Pro Tour scene for that matter) relaxes a little, so yip I might be able to sneak my mountain bike in there for the Tour of Britain or Franco-Belge.

Keepers:  Do mechanics get any where with podium girls?

Kris:  Does giving them a bit of a smile and wink and a whistle count?

Keepers: Is a beer required after a day of stage race wrenching?  Or is it mandatory?

Kris:  The staff fridge in the bus always has cold beers ready after we close the truck for the night, for sure.

Keepers:  Being a mountain biker and singlespeeder, what do you think of the gulf that still exists between roadies and mountain bikers, i.e roadies dismissing mtb as a second rate discipline, and mtb'ers dismissing roadies as 'gay'?

Kris:  I don't know if gulf is the right word, its just two different sports that are always growing further apart. You cant really compare road cycling and €˜proper' mountain biking, you know real trail riding and back country exploring, so a road rider cant say that's second rate, second rate to what? On the other hand, a professional road cyclist in a Pro Tour team is making a waaaay better salary than most pro mountain bikers, so they can't really say €˜gee your gay', as the said roadie is leaving the race in their 2010 Ferrari. But these super aero paper thin skinsuits we are using for the time trials €“ gay.

Kris is looking forward to getting the last of the season's big races done and dusted, and will be heading back down to his hometown of Rotorua in October, where he will be downing more than a few beers and having a ride at the SSWC 2010.

Kris:  My girlfriend just entered for that actually! I should be able to make it back to Roto in time for the big day on the 23rd.  I'm in no decent shape for racing but the party should be good!

*This next question is from Frank, and a few of the other Keepers were concerned that it might be bordering on ridiculous, so blame Frank if you agree!

Cyclists – especially roadies – are notoriously worried about their weight.  I can only imagine what the chatter is like on the ProTour.  Does this sickly, teenage-girlish weight obsession spread into the rest of the team staff, including the mechs? You are a pretty lean guy, but I wonder – when surrounded by the pros day and night, do you feel that you are too fat to climb, or are you secure with your weight?

Kris:  It doesn't matter shit that we are surrounded by pro bike riders, they have a job to do and we have a job to do.  It's just a job and there are days on the Grand Tours when I don't even see the riders for days on end. So you can't go around idolizing them or checking what they look like because it's their problem, not ours. If I can jump out of the car and run up to a crash quickly and climb in and out of the cabin of the truck no worries, then I am ok. A little bit of bike riding between races and in the off season seems to take care of that for me.

Keepers:  And finally, are there any of our Rules that you think are applicable to the riders on your team, or on others, that they do/should abide by?  Is Rule #5 a given?

Kris:  Ha yes! Im going to print off  The Rules and tape them up in the truck, and when they come over whining about something, I can merely take my long 10mm allen key and point to Rule #5, in silence for extra grizzliness.

There you have it, Millar, VDV, Ryder, Deano, Farrar and Co. all are required to abide by The V, or risk the wrath of a 10mil-weilding mechanic!  No wonder their results have been improving in the late season since this interview…

Thanks again Kris, see you in RotoVegas for a beer or two!