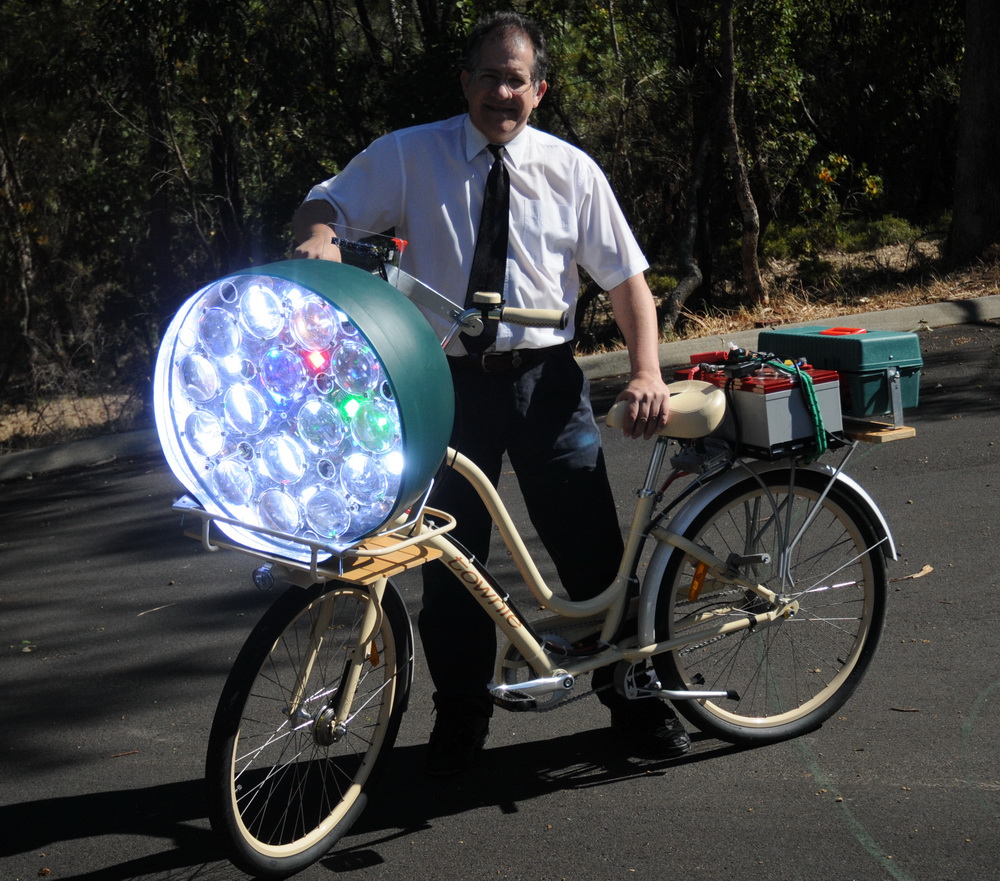 The conundrum for the Cyclist (but not the bike rider) presents itself daily. We try to keep ourselves safe every time we get on our bikes, and we want to achieve a balance between form and function. Sometimes function wins, though mostly it’s form with the upper hand. A YJA isn’t going to protect you if you’re already under the wheels of a car, and will do little to prevent you from getting there. Likewise a helmet, yet it is considered an essential item, whereas a fluoro anything will (should) quickly be dismissed.

Like a helmet, lights are one of those essentials that we wouldn’t think of riding without. When we go out on our bikes after dusk, I’d bet that lights will always be reached for before, or instead of, a YJA. The commuter will buy either the cheapest and therefore weakest light set, or go to the other end of the spectrum and get the most powerful lights they can find for the meagre amount of cash they are willing to spend. The middle ground seems to be largely ignored, possibly because someone spending $100 on a headlight will more likey be tempted to spend an extra fifty to double the output. This is where it gets tricky.

Because being seen is the most useful thing for a night rider, more power and more lumens are coveted. With the tech available now, a super-powerful light can be bought for a fraction of what they cost even a few years ago. Lumens are increasingly hitting over the 2000 mark. Batteries charge quicker, run longer and weigh bugger-all. These lights are what we coveted back in the 90s when we first discovered how much fun riding through the bush in darkness was. And it was dark; the Halogen bulbs and brick-like Ni-Cad batteries doing their best but falling well short of adequate output for snaking through trees and down rutted singletrack descents. As the technology moved on to LED and Li-Ion, prices first skyrocketed but then rapidly fell as more small manufacturers got it on the action. Now we could light up the trails like daytime and not have to carry an extra five kilos to achieve it.

Then the commuters got wind of these cheap, powerful, bright lights. Why spend $100 for a 150 lumen job when $200 will get you an 800 lumen hole-burner? Geez, for another $60-100 you can almost double the power. Because you can’t put a price on safety and peace of mind, especially if you ride your bike in traffic every day, it makes sense to have good equipment. So here’s that tricky part: what if the gear you bought to keep you safe was actually putting you in the way of more harm than good? What if that light does a brilliant job of illuminating dark backroads, but conversely is too much for urban use? The trouble with these high-powered lights is they are designed with off-road riding in mind, where mega-lumens are king, where you need to be able to light every nook and cranny that the trail presents. And they’re brilliant at that.

When these lights find their way onto a road or commuter bike, however, it’s a clear case of overkill. 1500 lumens is way too much for the road, especially in built-up areas. If you’re out in the desert or boondocks, perfect; it’s when they’re unleashed in traffic that problems arise. Cars have high and low beams for a simple reason. If you are looking into a bright light coming towards you, you will be impaired and at risk of being temporarily blinded, not good when you are in control of a two-tonne vehicle. Hence drivers are required to dip their lights when 200m away from oncoming traffic. Bike riders are not. So they hit the high beam, get the strobe effect going, and feel safe in their perceived bubble. Meanwhile, everyone else is impaired and endangered by them. Off-road lights shouldn’t be on road-going bicycles. It’s like a redneck with those huge spotlights on their truck, driving around town with each one blazing. And can you imagine the chaos if car headlights had a strobe function?

Drivers don’t need any more reasons to get pissed off at cyclists; in fact they don’t need any it seems. When I’m in my car, or on my bike at night and am blinded by an oncoming cyclist, it’s usually by a high-powered light set to strobe. The brightness is one thing to deal with, but the strobing effect really intensifies the effect and more worringly diminishes the driver’s ability to correctly judge the distance that the bike is away from them. It’s near impossible. On a recent after-dark road ride with @Bianchi Denti, we encountered an oncoming rider at least 300 metres away, travelling toward us; we were pretty much sheilding our eyes and having to look off to the side of the road not to be blinded. It was ridiculous. When I offered that the flash and brightness was dangerous, we were met with a hail of expletives along the lines of “yeah whatever, why should I be unsafe”. Well, having a vision-impaired truck driver hurtling towards him might be the wake-up call he needed.

*Keep the lumens under 300-400 for road: It’s more than enough for the darkest backroads, and you can drop the beam lower in built-up areas. A small USB-rechargeable light is less bulky, all-in-one (no extra battery pack) and does a stellar job.

*Don’t flash: This is the worst feature ever for a headlight. It’ll disorient drivers and other riders, and how anyone doesn’t get a migraine from riding with that thing flashing constantly I’ll never know. They probably do. Have a solid beam at all times, and if you really want something flashing, make sure it’s a small output and is mounted fairly close to the solid beam light as well.

*Flash at the back if you must: Except if you’re riding in a bunch and someone has to stare at your light for prolonged periods. Then use a solid beam or a low-frequency pulse. And if you must flash, then keep it simple and use a basic on/off pattern. Those disco-light patterns with eight different LEDs doing various things? Ridiculous, and another enabler of motorist condemnation.

*Helmet-mounted lights are awesome: For mountain biking! It allows you to project light where your bars may not be pointing, essential for trail riding at night. For the road: ridiculous. All they do is give the impression that there’s a low-flying plane coming in to land on the highway, and when you look directly at drivers, well, you know what happens…

*”I didn’t see you.”: Yes, even with your bike lit up like a disco, drivers/pedestrians/other riders may not see you. No matter how safe you think you are being, how many lights you have, how bright your YJA, you still need to be attentive and assume everyone is out to run you over. And if you read the comments on any online story of Cyclist and driver interaction, a lot of them probably would.