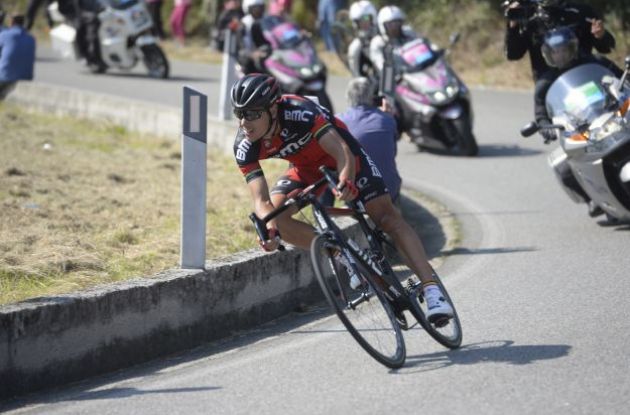 The Giro ended on Sunday in Milano. Three weeks of Italian immersion have been completely worthwhile. I knew May was going to go this way but a DVR that dutifully records hours of racing every day…I’m only human.

Italian TV does a fantastic job covering each stage. The Giro becomes a travel log of the country as seen either from a helicopter (I’m assuming Gianni Bugno is the pilot) or a motorcycle, either of which I would happily travel in or on. While the racers are riding in the peloton, none of them are enjoying the countryside like we are. Italian TV even strolls around each start and finish town for us. The riders are too shelled to do that. They are either in a bus or a hotel when not racing.

The moto drivers who pilot the TV camera people and the camera people themselves deserve medals. Following Phil Gil as he bombed the top of the final descent of Stage 18 was too exciting. For me, it was the most fearsome minute of the whole race. The lead moto ahead of Gilbert was too far ahead to be seen so Gilbert was going into each corner not knowing the exit. He raged into blind corners on the edge of disaster. And behind him was a guy on a motorcycle whose passenger was probably standing up with a heavy camera on his shoulder. It was out of this world. Unfortunately there are no video clips of that segment of the descent, except on the full Stage 18 coverage. These moto guys are studs. This is hazard duty. You hear the motorcycle tires chattering as they attempt to follow cyclists into descending corners. Moto drivers must have a hard time unwinding after each day’s work.

While the helicopters and motorcycles show me all the possible hilltop towns I need to visit, they can also show me a little more than I need to know. I can cross the Moritolo off my life list, seen it, don’t need to do it; thanks moto men.

The Graceful Touch of La Volupté