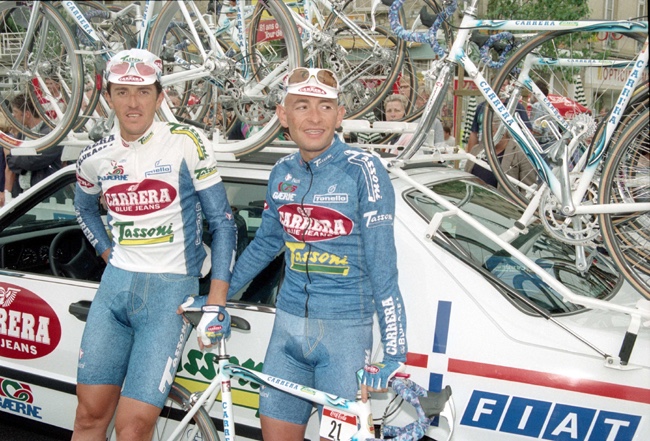 Whenever something tries to be something it isn’t, you wind up getting into trouble. Those Cutlass Cruisers in the 70’s and 80’s with vinyl wood panelling weren’t fooling anyone. Neither are those linoleum tiles in my kitchen; not one person in history has ever mistaken them for being marble. And Lycra has never tricked anyone into believing it was a pair of jean shorts. Despite the extra effort to add a fly and pockets to them.

Which brings up an important point. Looking Pro is not the same as Looking Fantastic. They mostly just stumble into looking cool because they’re on their bikes so much that everything becomes natural for them. But Pros frequently look completely crap, often because their sponsors are paying them to wear something no one in their right mind would ever wear. Like denim-printed bib shorts. But sometimes, when you’re baller enough, you can pull off the most horrendous of kit and still Look Fantastic.

Pantani is the only rider on the long list of those who rode for Carrera who ever pulled off this look. Shit, he even pulled off the all-denim-print long sleeve jersey. He might even have special-ordered it, just to prove he could do it.

Don’t try this at home, kids. You are not this cool, and you can not pull off that look. Pencils down, class dismissed.