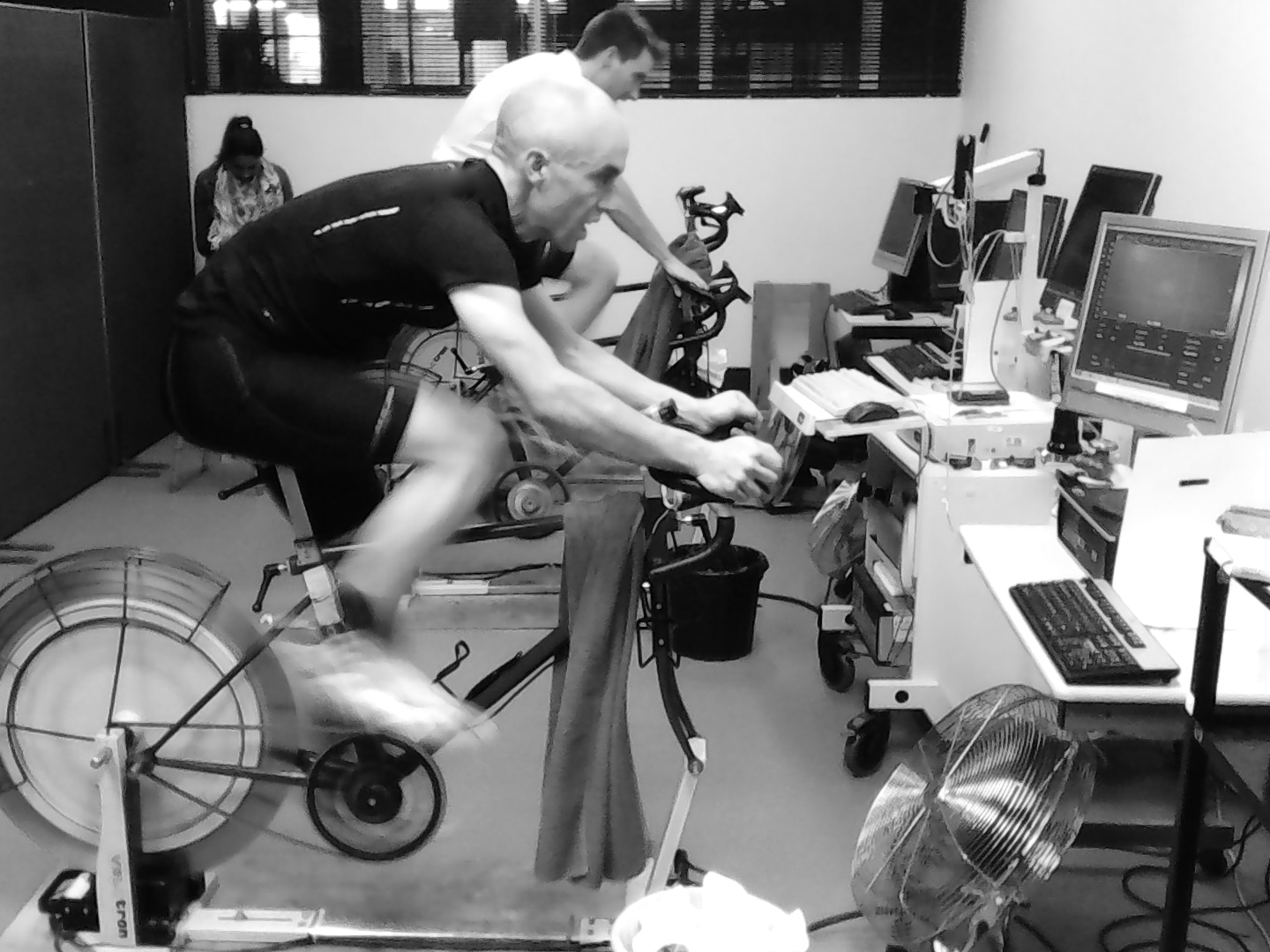 @lanternerouge has been kind enough to go into the V-cave for the betterment of all, and write about it. Eating and riding, they don’t mix well; the harder you ride, the less you can eat. No one is hungry when chewing on their bar tape but the Man with the Hammer has no remorse. He will smite. He is all about the smiting. Bon Appetite.

I know that it will all be over soon, but it doesn’t make dealing with the present situation any easier. My legs are in agony and feel ruined. Following the last two and half hours of uninterrupted pedalling my brain has been trying to make sense of why it still needs to drive them this hard, when we’re not actually going anywhere. The higher purpose behind this rebellion against self-preservation and comfort suddenly seems vague and unclear, but some stubborn corner of my consciousness remembers that it is not permissible to stop – not until I am physically too exhausted to turn the pedals anymore, anyway – so we continue. I pick a spot on the floor and stare at it, then notice that I am starting to hyperventilate.

I am moments away from ‘blowing up’, as they say, which will mark the completion of today’s testing session in the lab at Massey University’s School of Sport and Exercise. Mathilde is standing next to me concentrating on my cadence, the only piece of information provided by the cycle ergometer I’m riding that can be seen through a window cut out of the piece of cardboard that is taped over the monitor. Behind this makeshift screen, invisible to me, the graph showing the wattage I’m working to is steadily climbing and the clock is ticking. Mathilde is a French student continuing her studies here in New Zealand, and I am part of her science project. My concentration is narrowing and I am barely aware of her presence until I hear her announce “first warneeng” in her thick accent. My cadence has just dipped below seventy and I need to pick it up. I command my legs to push, and they respond by slowing more. Then they stop working altogether. I gasp that I’m cooked, fini, and she shuts down the test before quickly and efficiently pulling the information she needs from behind the screen. I am allowed to spin gently for several minutes before having a shower and going home. In exactly a week I will be doing it all over again.

This session marked week two of my four week block. Mathilde’s study is comparing the effects of ingesting different carbohydrate formats on endurance exercise performance, and each week its participants follow a closely controlled schedule of nutrition and training that culminates in a sadistic performance test on one of the lab’s ergometers, during which one of four randomly allocated feeding protocols is applied. This particular week I was being fed gels and water, and despite the suffering I was going through at the end (Massey professor and seasoned A-grade racer David Rowlands engineered the programme to replicate the high intensity of a 100km road race, so the entire session is more or less a smashfest), I actually found the gels pretty good and liked the noticeable pick-me-up they gave. Jaden, the participant on the erg’ to my left, was not having nearly the same experience with the chunks of energy bar he had to chew down today and had to absolutely bury himself just to make it to the end of the test – and this guy is strong – leaving me nervous about how I would cope on Powerbar day.

My interest in getting involved in Mathilde’s research came partly because I am into science and find her research question topical and interesting, but also because I’d heard from others that David’s programmes are an opportunity to do some very brutal but effective training. With the seasons shifting gears and wintering up, I looked forward to having a motivator to keep my riding going and maybe up my game in the process. In that sense, it is certainly working; this month I’ve spent much more time on my bike than I usually would, in conditions that I wouldn’t normally bother going out in, and I’m really, really enjoying that. Oddly enough though, it’s the Friday torture session in the lab that I find myself anticipating the most.

Taken at face value, the lab ride appears to be cycling stripped of its most enjoyable aspects. I travel exactly zero kilometers. There is no scenery, no stimulus apart from a screen with performance data and brief snatches of conversation with researchers – and sports food and drink administered at strict, regular intervals. I have developed a hatred for the saddle that I chose to ride over the four weeks, a hard unpadded thing that I thought had a nice shape to it but now feels like it’s bruising me all the way to my bones. There is no exhilaration of chasing down the lead bunch, surging away on a climb, carving through a turn or sprinting for the finish line. What has been distilled out is suffering at its most exquisite, the opportunity to experience what happens to your body and mind when you open the taps and keep them running until there is nothing left.

I discover during these ‘rides’ that when my legs are in pain and there is no option to stop, the visualisation that best helps me to continue is to imagine myself riding my mountain bike down a steep technical trail. In my mind I am coasting, unweighting the bike, maneuvering into position for a roll-over, trying to flow over the terrain, nailing that difficult corner. The weird disconnect this creates from what is happening out there in my body has an almost intoxicating quality to it. As the test gets harder and harder though, there is nothing for it but to focus entirely on maintaining form and keeping the legs voluntarily turning over. I have been trying to practice mindfulness and acceptance over the years, and at this point the session becomes an acid test of sorts: my choices are to observe my train of thought and deteriorating physical state with curiosity but remain impassive, or identify with it – and struggle to drown it out or risk caving in to the desire to stop.

Mathilde’s study of course won’t convey any of this. She will neccessarily reduce my experience to a smaller set of quantifiable factors, and present a statistical analysis of time to fatigue, gastric distress, perceived exertion, etc., that has been compiled from her testing of a group of participants like me who are anonymously and impersonally identified by numbers assigned to them. Whatever conclusions she draws from this will add to an existing body of evidence, all of which hopefully helps people who are interested in this sort of thing to figure out better ways of fueling the human engine when it’s redlining. In that sense, the lessons that can be pulled out of this experiment have the potential to be of practical use to anyone that wants to perform better on their bike, which is pretty cool and makes my experience in taking part feel a little less like just doing a bunch of hard training. I’ll no doubt be applying what I’m discovering in this study to my own nutrition, but in the meantime I find myself getting routinely reduced to a pulpy, drooling mess, drowning in that bittersweet experience that has become a celebrated thing among us, to the bewilderment of non-cyclists: what it means to really suffer on a bike.