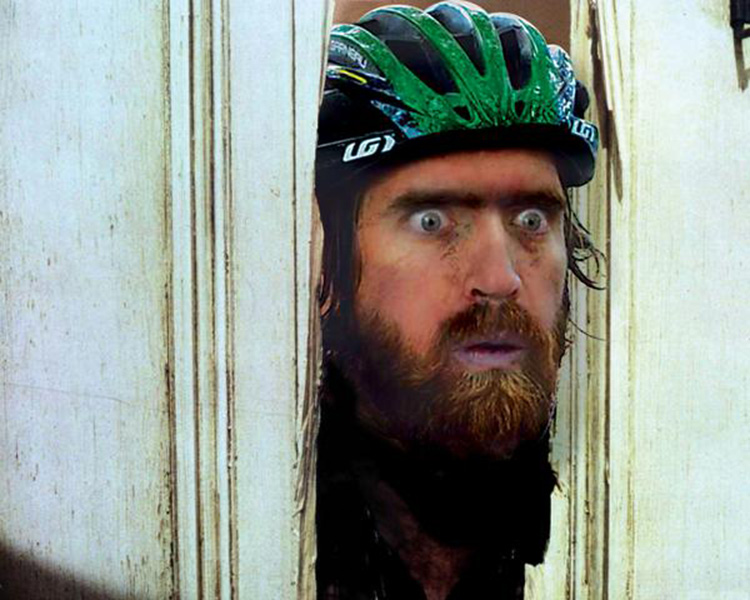 Back when this Rule was coined, it seemed to have little meaning or relevance at all to Cycling. The only beard we’d ever witnessed on a Cyclist was that of the nasty Russian guy in American Flyers, and we all knew he, like Kevin Costner’s acting ability, didn’t actually exist.

Then along came Pantani, plus a slew of mountain bikers in the early 90s sporting goatees and variations of pointy sideburns, not the cool kind like the true stylemeisters De Vlaeminck and The Prophet wore. The goatee quickly became a partody of itself, especially when paired with dyed flouro-coloured hair, or worse, dyed as well as the hair. Sadly, I was guilty on all counts, culminating in an embarrassing situation when my best friend’s father died a couple of days after I turned my head a retina-scorching shade of Slazenger Yellow. It made for some welcome lightening of the mood at the funeral and wake though. It’s how he would’ve wanted it, so his widow told me, without a hint of irony or sarcasm. When Il Pirata did it on the Champs Elysees a few years later, I felt somewhat vindicated for my funeral faux pas. The crux of it though was both The Pirate and I looked ridiculous, even if we felt like rebels, but it did predicate the Pantani Clause in Rule #51.

That’s the whole trouble with the beard epidemic of the last year or so. When one person does something that goes against the grain of society, they’re a rebel by default. If the whole of the population, or close to it, is doing it, then it’s just a flock of sheep situation. And you know who stands out then? The sheep who’s been shorn. Maybe he’s covered in bloody cuts and nicks and has a few dags hanging off his arse, but he’s still the one that everyone is looking at. When Luca Paolini showed up with the makings of a full ginger bushranger face a couple of seasons ago, he garnered attention because it was individualistic. “The guy with the beard” stood out like dog’s balls. Then one or two others started sprouting some stubble here, a moustache there. It worked a treat for my mate Alex when he turned up at the World Cup cyclocross races in 2012 with his full handlebar upper lip warmer, because he stood out. Now there’re other imitators playing the same card with not as much success, because it’s been done. Originality is key.

I say it’s time for the beard to be banished from the peloton, and the bunches of the world. It’s time we took the razor to our faces as well as our legs; another mate Josh has even gone the extra step and has started using a cutthroat blade. If hipsters have taught us one thing, it’s that anything cool will soon be tarnished, besmirched and ruined by their appropriation of it. They did it to the Cycling Cap, and we’re only just reclaiming its rightful position as For Cycling Only. The beard, well we can let them have it, because it is soiling good reputations of fit men with smooth guns, smooth faces and smooth pates that are a hallmark of our sport. Shit, when even Tommeke has more hair on his chin than on his head, things have gone too far.

93 Replies to “The Shaving”