Guest Article: Where did all the Time Go? 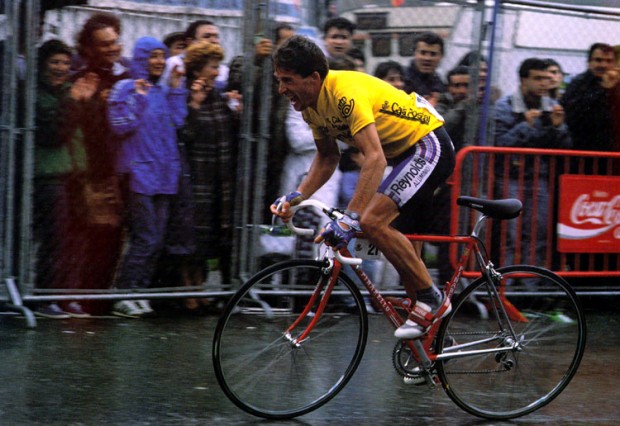 There has been a lot of talk lately about shoes: the While Ladies, the Yellow Princesses, and the safety and reliability of Spinal Tap Black.  But shoe color has not always been a choice, and it is with this premise that fellow community member Jarvis has contributed the following article for our consideration.

He commented to me during our communication about the article that finding the Velominati felt like he was finding his home.  Indeed, even a quick scan of this article reveals a lifelong passion for the finer details in this great sport of ours; this is indeed a Velominatus.   Here Jarvis covers the origins of the White Ladies, and what has happened to the company that was bold enough to present a white shoe during a time that black leather was the only choice.

Look at the peloton today, or more specifically at their feet, and it’s a sea of white shoes, so much so that black shoes look out of place – even wrong. But this wasn’t always the case; go back just over twenty years and you’ll reach the dawn of the White Cycling Shoe. In the late 1980’s, if you wanted anything other than black shoes you had a choice from about three manufacturers; if, however, you wanted white shoes you had one option, Time.

First appearing around 1987, Time produced a black shoe – albeit black leather with grey mesh – twin red straps with a red “go faster” stripe – but they also produced a white version as an alternative. As modern as the black shoe looked in comparison with the other shoes of the day, the white version was the striking number; the uppers were white with the same twin red straps and side stripe, the polycarbonate soles were white with a red heel rubber. It’s difficult to find a definitive history, but my understanding is that Time had intended, or at least expected, the black shoe to be the bigger seller, Pedro Delgado can be seen wearing the black version in the ’88 Tour de France but by the end of the race he was wearing the white version and it was the white shoe that the professionals chose. Either way, the white shoe revolution was taking off and by the following year Time sponsoring not just individual riders as before, but whole teams such as Buckler and Helvetia La Suisse.

It was around this time that I became obsessed with Time products; with the technology of the pedals designed to minimise harm to the knees, and with their modern designs. Most other shoes of the era were full leather with perforations in for cooling, a method that had been around for decades, and were tightened with laces or small Velcro straps. For the aesthete, Time shoes were a revolution, they were almost a perfect design: simple, clean lines, with bold contrasting colours matched to modern technologies. Unless you were a staunch traditionalist, there wasn’t much not to like.

However, it was the 1992 model that I consider to be the ultimate version for the aesthete and the prototype for most if not all modern shoes. By now, the asymmetrical toe-box and white sole of the original model were gone, replaced by a more rounded toe-box and a black carbon sole. For ’92, further subtle changes were made: the straps were now leather with rubber tops to give better grip and which looked better than the cloth strap of the originals. Additional detailing was also introduced, subtle enough not to detract from the original simple design and colours whilst giving the shoe a smarter look: the lengthened side stripe giving a nicer focal point for the perfectly angled pedal stroke.

Eighteen years on from when Time, the originator of the white shoe, were sponsoring top teams such as Buckler, Helvetia and Tulip, as well as individual riders like Pedro Delgado, the peloton is full of white shoes, but none, as far as I can tell, are Time. So what happened?

Aesthetically 1992 marked the high-water mark of Time’s design team. The next model saw the introduction of a dark blue to the colour scheme, greatly detracting from the original white and red design and, although the yellow and red Equipe Pro of the late ’90’s was a return to form, this shoe proved to be the last based on the original design.

While competitors developed shoes with click-locks, ultra-thin soles and mouldable uppers, Time seemed to get side-tracked by their frame business. Either that, or they were employing blind or desperate designers, as they managed to leap spectacularly from one design disaster to another. By the mid-2000’s, this had resulted in a shoe so bland it was instantly forgettable.

They have, however, turned things around with their latest incarnation, an elegant looking shoe that does away with much of the over-designed look of its predecessors and has an upper that can be moulded to your fit by a hair-dryer. According to reviews, they are very good shoes and they cost substantially less than most of its competitors. It begs the question: why aren’t any Pro’s wearing them?

I don’t have any real answers as to why Time have lost their presence in the peloton. It has been suggested to me that Time have moved on from their shoes and pedals and are concentrating more on their frame business. But that theory doesn’t completely work as it doesn’t account for the recent launch of their i-Clic pedals. It seems good business sense dictate that if you are launching new pedals – and you just happen to have new shoes out around the same time – you market both at the same time. Maybe they are concentrating on their frames, but if they are, that doesn’t extend to the fact that they are not sponsoring any teams with frames this year.

Getting your product into the PRO peloton costs loads of money, and for a small company the marketing budget must be spent wisely. Although the less famous riders are still probably more than happy just to get a free pair of shoes, I imagine the amount of money required to attain the same sort of brand presence in the peloton as they had in 1992 is substantially more. But you would have thought that they’d at least want some presence at the highest level of the sport. Small brands like Bont manage to supply a lot of riders, so why not Time? If the product is as good as the reviewers say it is, then why wouldn’t the company want it out there, being seen? After all, that is the point of sponsorship.

From this to this, just ignore the stages in between.

17 Replies to “Guest Article: Where did all the Time Go?”