The Language of the Peloton 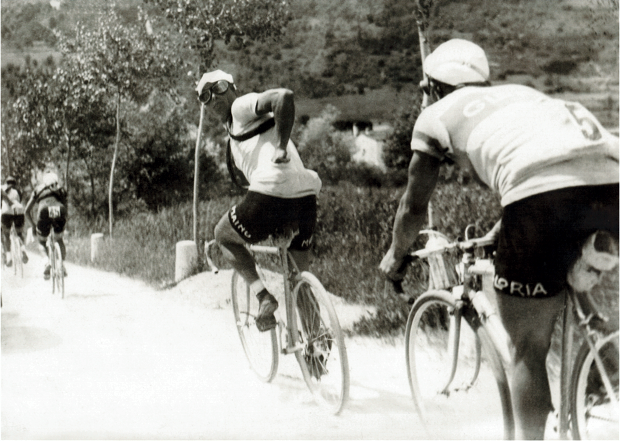 I can’t understand the American obsession with finger food in general and sliders in particular. Finger food, in its strict interpretation, should be food for your fingers, not food which is eaten with one’s fingers. While “finger food” is inaccurate as a generality, sliders are basically just hamburgers that never got the Rule #5 Talk. Burgers are meant to be big, juicy, and stop your heart in its tracks. It’s the American Way.

But the point is, despite Juliet’s assertion to the contrary, there is quite a bit in a name. Whereas the mere mention of “sliders” invokes some level of anger within me, there may be a few people around who actually like the name quite a lot; perhaps it makes them feel like eating four tiny burgers is healthier than eating a single giant one, as though it will somehow make their blood flow faster through their presumably already-clogged arteries.

Being bilingual gives one a view into the use of words that people who speak only one language would struggle to have. Not that being bilingual makes you any better at communicating; quite the oposite, in fact. I find that words and letters are very fluid for me and I tend to work with a general “sense” of what a particular word’s definition might be while monolingual people understand quite well what specific words mean and what order letters are intended to arrive in. As it turns out, knowing a word’s precise definition can be helpful in certain situations, such as when one is attempting to use it in a sentence.

But speaking more than one language (I also speak a smattering of French and a crippling amount of German) gives one a glimpse into the beautiful depth of expression that can be found in a simple jumble of letters. And this is where having a general rather than concrete sense of a word’s definition becomes a beautiful thing; I can guess the meaning of a word or sentence and not be bothered by the accuracy of my impression while still getting the meaning of what is being said. I’m then at liberty to allow my imagination to add layers of meaning atop my sense, giving a beautiful depth to a simple word. Its one of those beautiful moments in life when being wrong can be much more enjoyable than being right.

The sport of Cycling has very rich language that surrounds it. Because of the Continental influence during its formative years, it has obtained this richness by incorporating expressions from several languages including French, Italian, and Flemish. I’ve learned from speaking and learning to varying degrees of failure some of these languages, that American English is actually a relatively inexpressive language. American English is usually focussed on giving meaning to things and actions while European languages, while doing much of the same, will modify words slightly to also convey some spirit that surrounds the intention of their use.

Its not surprising, then, that when we speak of our sport, we generally turn to the Continental terms in order to describe the more subtle properties we’re trying to convey. Ten of my favorites are below; the list is painfully brief.

75 Replies to “The Language of the Peloton”