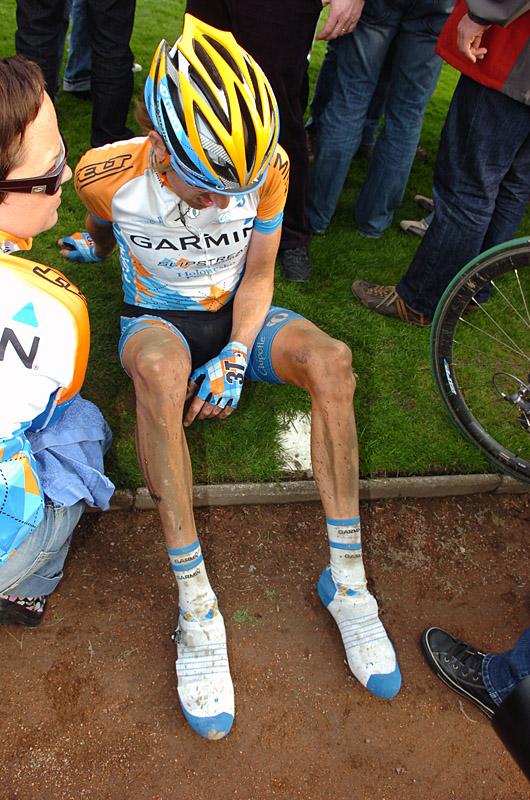 Anatomy of a Photo: Sticks and Stones

It’s no secret that the cobbles are the domain of the big men. Look through the list of winners in Flanders and Roubaix, and you won’t find any flyweights, grimpeurs or probably anyone under 80kg. Ok, maybe lighter than that, but more likely the weight will be compacted in muscle and distributed over a shorter body than Jolly Naughty Wiggins displays here.

With the Keepers Tour locked and loaded for the Euro Spring, the anticipation of riding the roads I’ve revered for decades is building to a point that could be deemed unhealthy by outside observers. Anyone within earshot gets bombarded with “did I tell you I’m going to be riding the cobbles?”, usually met with a blank stare and a quick retreat. But after I think about the truckloads of awesome to be had riding the hallowed ground, my mind invariably wanders to the ‘what if’ scenarios. What if Il Profetta gets rattled to death and cracks? Well, it’s meant to be, it’ll be dying in its bithplace, a return to the soil from whence it was born. What if The Lion tells me to Rule #5 it and stop being a pussy? I can live with that, even welcome it (especially if we are in the bar after the ride!). But what if my over-zealousness gets the better of me and I’m sent plummeting to the ground, and my spindly Twiggo-esque limbs succumb to the stones that even the Lion’s mighty knee had to concede to? Snap, game over.

So it looks like the best preparation will be a training regime of Welli-Roubaix gravé riding, peppered with weights to build some insulating muscle. And for fuck’s sake, I’m a mountain biker, how hard can it be to ride over some rocks? Harder than I can even imagine, I’d say. I’m praying for a wet Roubaix next Spring, but only for the Pros… I won’t mind riding in dust one bit.

76 Replies to “Anatomy of a Photo: Sticks and Stones”