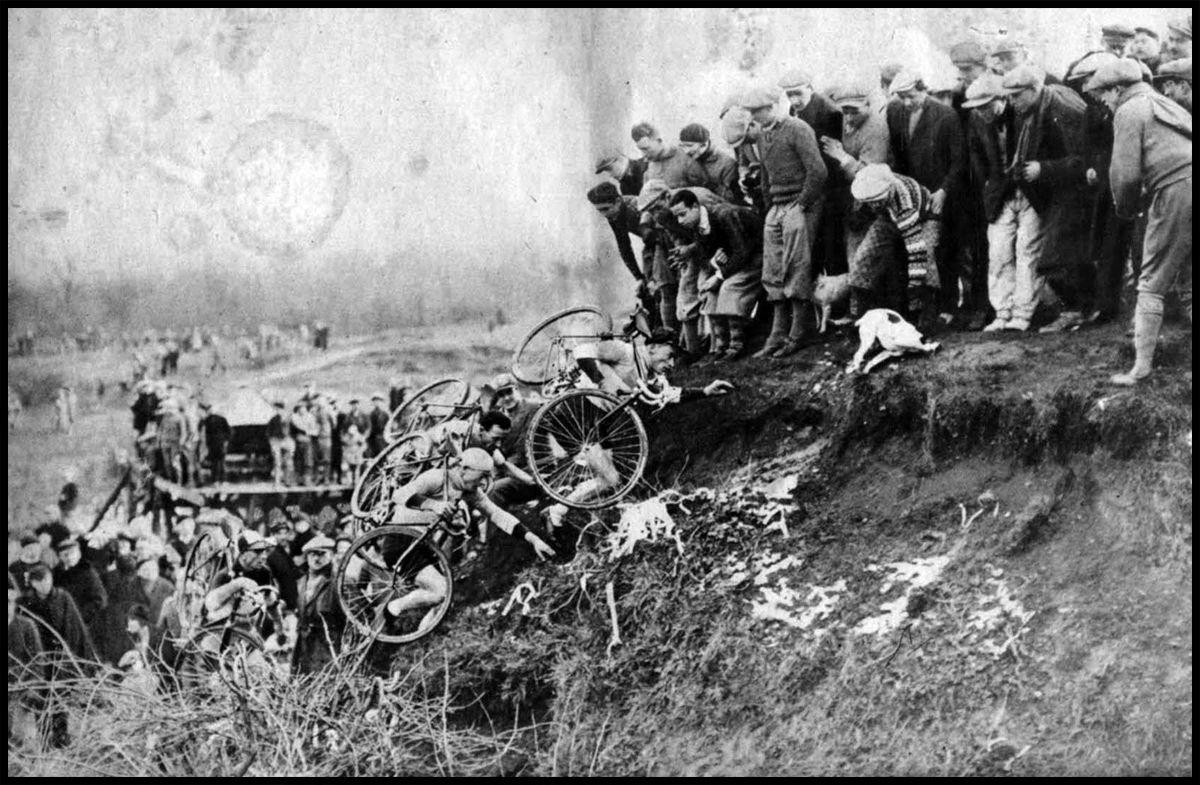 Anatomy Of A Photo: The Battle Of The 13th Bunker

Sylvester wasn’t happy with his second shot at the 13th. “I say, I’ve blimmin well hooked that one tewwibly to the left, old chap.” “Oh yes, made a right hash of it, a real dog’s breakfast” chimed in Roderick, his live-in help, part-time caddy and full-time lover. “Let me get that for you, I don’t want you to get your Plus 4s soiled. Not again!” Mirth ensued.

Peering over the edge of the deepest bunker this side of Berlin, Roddy reeled back with startled alacrity. “I’ve just seen the most wonderful sight. There’s a gaggle of strapping young men outfitted in the finest woolen attire, shorts so tight they leave very little to the imagination, carrying their pedal cycles like crucifixes… and they’re heading this way!” Soon, the other groups playing through caught wind of the commotion, and joined in the voyeuristic excitement.

As the cyclists came nearer into view, it became apparent that they were being pursued by a well-dressed mob, some riding on a giant float broadcasting swing music, wielding bracken and fronds they’d pulled from the edge of the water trap at the 11th. Roderick summoned the Faldo brothers and young Sharky Norman to the precipice. “Oi’ll get me dog Mangey” yelled Spotty Dick, the town’s number one mentally disturbed accountant, “ee’ll ave em owt in no toime.” While the argyle mob continued to peer gormlessly into the bunker at the seemingly confused runners/riders scrambling up its side, Spotty did his best to hide the fact that Mangey was, in fact, long deceased and only partially taxidermied. “Go orn Mangey” he yelled as he pushed the corpse into the path of the escaping men.

What happened next cannot be documented here with any degree of accuracy or factuality. The events that day are mired in mystery, sullied by innuendo, venerated by legend. We may never know the real story, most will choose to believe that which helps mask the horror of carrying one’s bike, and others will pass it all off as “just a sport”. The only thing which can be factually stated is that Sylvester never played at St Monotone’s again, and the 13th hole’s flag remains upside down.

22 Replies to “Anatomy Of A Photo: The Battle Of The 13th Bunker”