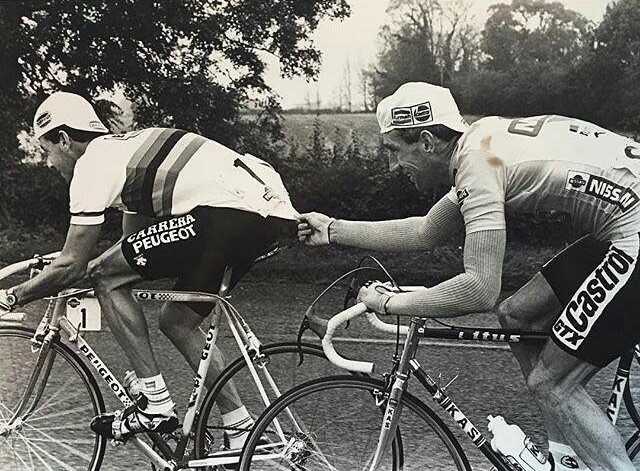 As Tyler Farrar rode by in the other direction, we gave each other a subtle wave; not the wave between friends, but between brothers of the road. On another day, I might have turned around and chased him down, like the first time I’d seen him riding locally. Not so much to bother him or to ride with him, but just to say I’d chased down Tyler Farrar. Not everyone can say that, you know.

But the legs had been missing for days. Weeks, even. It had already been a dark several weeks and there was no end in sight. It wasn’t the weather that was dark, but the form. They can be such cruel things, The Legs. The Legs tend to tell us within a revolution whether we’ll have a good day or not, and every ride I’d been on lately, they spoke only of toilets. On the rare occasion that I would join the Hedrick group rides, I was relegated to riding the wheels or wallowing at the back. On one occasion, I was even the rider who rolled up after the climb as the others waited. I wait at the top of the climb, not the other way around.

It is a cycle that feeds into itself; I was training a little less than usual, but not significantly. Certainly not enough to justify the lack of form. But the bad form was not motivating me to work any harder than I was and it made it very easy to find excuses not to ride. Not training harder means the form slips a bit more every week and before very long, you’re the guy the other riders are waiting for.

Then four days away to visit my parents; we worked long days on the farm but it was only the last two days that we carved out time to ride and even then it was just an hour of the three of us enjoying the moment and being grateful for the time together on two wheels. When I came home, work was waiting and so was my personal life which was all too tempting to indulge in, which I did.

Then the itch came. It started with small things, like noticing that my legs didn’t feel as supple when I walked to work in the morning. Or that my bounds up the stairs didn’t feel as fluid as they normally did. And then I started to miss it. Seven days I counted, seven days off the bike. For the first time since November, by my loose guesstimation.

But it wasn’t just my legs that felt different; my whole body was suffering and so was my mind. It was Monday when I realized I actually wanted to ride again. But it was impossible; too many balls in the air. Tuesday: the same. Today, I was determined to get out, but I was apprehensive of how it would feel to be back on the bike knowing how it feels to ride when you’ve missed a block.

I’ve rarely felt so good on a bike as I did today. I don’t know whether it was the enthusiasm of feeling that sensation of flight as you hover a meter or so above the ground or the rest my body had probably been begging me to give it, but I couldn’t keep myself from pushing harder on the pedals. In anticipation of a first ride back, I chose an easy route. But then I found myself pushing the pace and pointing my front wheel up the various little “bonus” climbs that lay dotted along the route of almost any ride in Seattle.

I can’t wait to climb back on my bike tomorrow. Can’t. Wait.

Be patient, listen to the signals your body is sending. Learn to distinguish between “good” not wanting to ride and “bad” not wanting to ride. And cherish that feeling of childish enthusiasm that awaits when you climb once again upon the bicycle and feel the freedom that pushing on the pedals gives us.