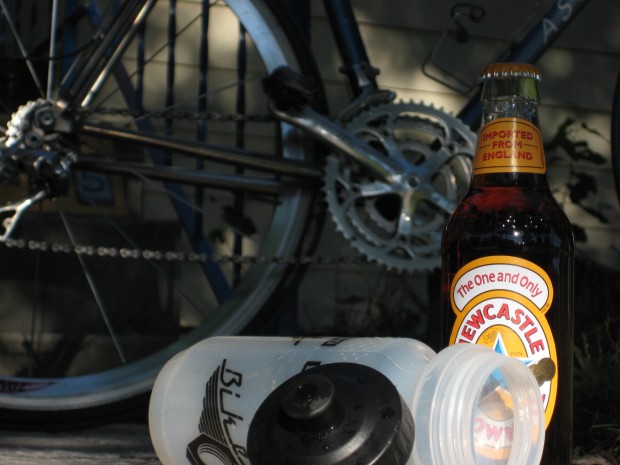 Initially, “Beer in the Bidon” was to be a single, definitive posting, an authoritative ranking of the single best variety of the single best and most important cycling performance beverage yet devised by the hand of man: beer. “Beer?” you ask. That’s right, beer (and say hello to your mother for me). Or, to put it another way, liquid guns. Packed full of easily accessible calories from simple carbohydrates (the simple starches of barley and wheat””and corn and rice, depending on what you are drinking””made simpler still by various degrees of malting, releasing the sugars), presented in readily available liquid form, recently vindicated as a recovery drink, a net hydrator in single servings, chalked full of testosterone and awesome, and oh-so-delicious, Our Heavenly Beverage turns out to be the ideal””in fact the ONLY”””sports drink” of choice for the hard-souled, hard-assed, hardman of our time.

But as it turns out, much as the cobbles of Paris-Roubaix require a vastly different set of skills and equipment than the slopes of the Tourmalet, so too do the variations and nuances of each ride””undertaken by a particular individual in unique conditions””explode the notion of a single, dominating mélange of malt and hops. Whereas this project’s failures have reflected poor beer choices””PBR, as you might imagine, served me poorly in the wallowing heat of Idaho’s desert foothills””its successes have come at the confluence of quality beverages and wise situational decision-making. There are certainly superior cycling beers””the GC contenders of the beverage world””but as with any day on any Grand Tour, any number of ales, lagers, and stouts have a good chance to take the day. Consequently, “Beer in the Bidon” has morphed from a single post into a series””a guidebook, if you will, for the careful application of all that is right and good in the world (beer) to all that is right and good in the world (cycling).

Taste in beer, of course, like preference of hood angle or pedal float, varies infinitely within a limited acceptable range, and far be it from me to set draconian rules for pairing your ride and your beer. But because your favorite beer may not always be the best beer for cycling domination, I have taken the liberty to provide a few guidelines for choosing a beverage that will put you at the top of your game on a given day and a given ride.

Begin by asking yourself: why am I drinking this beer? There is only one answer: domination. But there are many aspects to domination that must be balanced against each other. Physical domination, of course, is paramount. Here, there are three main things to consider:

There is a second type of domination to consider when choosing your beer, however, and that is mental domination. Here there are two types:

Within the rubrics of physical and mental domination, there are also a few things to consider when it comes time to actually choose your beer on the day of your ride. Again, these are guidelines, built from experience, not hard and fast rules.

And with that, here is the report from the first round of testing. May your bidons flow with the nectar of the gods and your guns rejoice in their lubrication with Voigtian feats of strength.

I am happy to report that after a few missteps the field testing is going very well. It began inauspiciously on a San Francisco Twin Peaks double with a Guinness in a mason jar jammed into my downtube cage back in April. The Guinness was the right choice””it’s the obvious choice to begin such an experiment with””but with the chatter from my ill-conceived titanium cyclocross fork on the urban descent inching the half-empty glass container toward my handlebars, I had visions of the whole project ending quite suddenly in a tragic, bloody, beery mess of glass shards, bent Zondas and broken bones. Happily, I am a superior bicycle handler, true Velominatus, and lucky sonofabitch not afraid to run a few of my former city’s well-intended stop signs, and I was able to reach down and snag the wayward vessel before it tumbled while ignoring other sensible actions, like braking. So we are up and running.

Pros: NO2 instead of CO2; easy to accommodate the recommended serving temperature; cache as a hearty beer; taste; awesomeness

Cons: Relatively low calories; it was in a fucking mason jar

Comments: To me, Guinness was the obvious beer to start the testing. Billed as a beer “for strength” and “for health,” it has often been touted as liquid bread. In my opinion, its relatively low alcohol content is a benefit, as is its smooth taste both warm and cold. I was surprised to discover that Guinness has relatively few calories compared to some other brews (including Bud Heavy, although that beer is not for bikes). The mason jar presented a problem both in that it nearly chattered out of my cage and killed me and in that it prevented a slow, sipping intake. Fortunately””and here is where Guinness really shines as a riding beverage””as a nitrogenated beer rather than a carbonated one, Guinness is much easier on the stomach and thus a very good beer for a rough and tumble urban ride with steep climbs, lots of stop and go, and in this case large gulps from a mason jar. Overall, it is a solid all-around beer for all types of cool to warm weather riding.

Cons: Imported in clear bottles; does not wear warm weather well; distributed in the U.S. by Heineken

Comments: A classic example of a great beer not necessarily holding up as a perfect cycling beer, although between the quality of the ride and my love of “the dog,” things did go pretty well. The snow banks lining the road kept me and the beer at a reasonable temperature, so the warm Newcastle problem was really not a problem (though it could be). There was the slight hint of skunk that often accompanies clear bottles, but nothing I couldn’t mask by turning the screws a little bit up to 35kph and breathing through my mouth. The only drawback really was that I realized on the ride that two California beers””the Boont Amber and one of my new favorites, Lagunitas Censored Copper Ale””could have complemented the ride better.

Cons: As a porter with 40 IBU (international bitterness units), this beer would not warm well at all. Sort of a Good Cadel/Bad Cadel kind of beer. I caught it a Good Cadel day. It’s also on the high end of ABV, so drinking it fast or without other fluid/food intake might not be the best plan.

Comments: Beer. Bacon. 1000m of climbing in the fucking rain. This was a winner. When I Schlecked my chain crossing a bridge and had to dig into some Rule #5 to catch Marko and Jim on the next section of the climb, the Sierra Nevada Porter was right there in my legs to get the job done. Bye Jim. Bye Marko.

Pair Rating: 3 (with a fair amount of charity)

Pros: It’s cheap; surprisingly good calorie to alcohol ratio (though I suspect there isn’t much good stuff in it); affiliation with working class American; cache with the hipsters

Cons: Well, it’s just not that good. It warms badly and is heavily carbonated. Also, it has cache with the hipsters.

Comments: Fail. I don’t necessarily have anything against PBR except that it has somehow gained a reputation as better than other cheap beers, which it is not. And to be fair, this was perhaps a day when I should have left the beer at home. But still, fail.

Weather: Sunny and 50º at the start; sunny and 35º with a vicious wind at the finish

Pair Rating: 6 (could be higher with a fresh bottle)

Pros: A good beer, brewed organically in a part of the country where they brew good beer and hard men.

Cons: This particular bottle had gone through much distress (heating and cooling); at 45IBU, it’s a little bitter and doesn’t warm very well.

Comments: My friend’s girlfriend accidentally spilled half of it before the start of the time trial, which on any other ride would have been a problem, but I sucked wind so hard for so long that I would have had a hard time finishing the whole thing anyway.  No beer in the world could have protected me from the Beartooth.

90 Replies to “Beer in the Bidon: Field Test Update”