Guest Article: Anatomy of a Photo: The Rise and Fall of the Badger

If we were meant to fly, Merckx would have given us wings. But he did give us two wheels and Physics. The first allows us to feel like we’re flying, and the second gives us the propensity to fall over and, as such, crashing – or the fear of crashing – is the constant companion of a cyclist. Our first experiences on a bicycle as a child probably involved a crash; if not on the first ride, then at least on a ride soon thereafter.

But crashes also help forge legends, as was the case in 1977 when a young upstart, Bernard Hinault dropped into a ditch at high speed. I’ve seen this photo before, but I’ve never seen the video (below) and therefor never had an appreciation for how deep and steep the ditch really was. Hinault is indeed lucky to be alive.

Alpin continues his V-Blitzkrieg by treating us to a Frenchman’s view of Le Blaireau and his incredible fall.  Enjoy.

The 63th edition of the Critérium du Dauphiné has just finished. At this time of the year it’s traditionally the warm-up for the Tour and many top racers came here years after years.

Many of you must already know this picture. It was taken the 4th of June 1977 at 15h22  in the last hour of the 6th stage of the Criterium in the rapid descent of the Col de Porte en Chartreuse to Grenoble. Just under the Col de Vence there is a very treacherous  and sinuous part of the road at 11% which faces the valley a half mile below.

Even today  after having take this corner time and time again, one cyclist must take extra care on this very spot: the surface of the road is a little better but the danger stays the same.

In France, this picture is entitled to fame for many reasons:

Perhaps some details of this picture interrogate some of us fellow cyclists: no helmet, no glasses, no cycling cap, no visible cuissard, nor cycling shoes or even a bicycle. Only the rear pockets of the jersey and the gloved hand pointed to a spectator could indicate that here’s a cyclist.

Maybe, this other photograph of the event coming straight from the historic live footage could help me to illustrate my point:

There is something missing.

Something that doesn’t put me at ease at all. 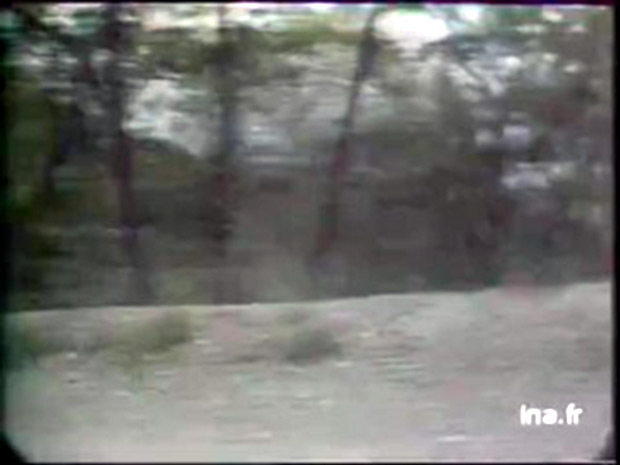 Nothing to see there

The two pictures exemplify for me the intimate connection between the cycling racer, the road bike and the road of the race.

Here you can see neither nor bike or road, it’s in the absence of the two that demonstrates the Unheimilichkeit of this event. The sheer tell of speed and danger. Hinault hadn’t  hurt himself so badly that he couldn’t take the start the day later but as he said repeatedly and humbly to cameras:

I thought  I was dead, I thought it was the time.

You can see the video footage of the Fall and Rise of the Badger here at the Archive for National television ( INA). The title of the film is “La Douleur et la Gloire“.

65 Replies to “Guest Article: Anatomy of a Photo: The Rise and Fall of the Badger”