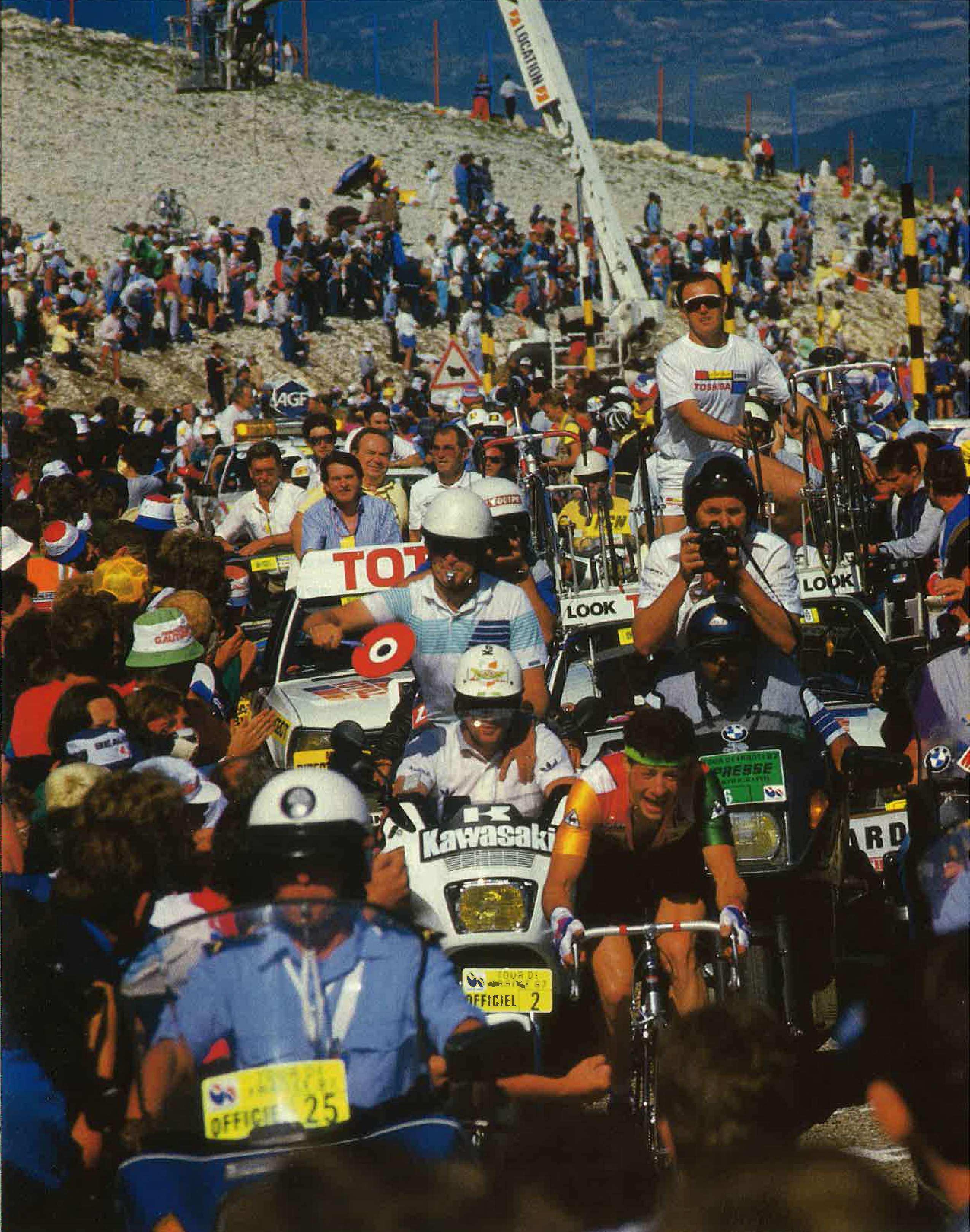 Guest Article: The Wait of a Nation

The Tour de France is France’s race. Actually, that isn’t quite fair. The Tour de France is France’s Olympics, World Cup, and National Identity all wrapped up into one big sweaty peloton of hopefuls. My first trip to France to watch the Tour in 2003 (I’d ridden there many, many times before, but never to watch the Tour) was an eye-opener in terms of its sheer impact on society; everything was on hold while the race happened – politics, the economy, everything. Except France hasn’t won it since 1985. They came close in 1989 but they were not close enough. They’ve had podiums in the interim but podiums don’t make it into a country’s collective memory the way winning does. Only the top step matters.

@Wiscot returns for a pre-Tour Guesty on just how hard it is to carry the collective weight of a nation upon a single rider’s shoulders.

When the 1987 Tour rolled around, the expectation of French success was high. Why wouldn’t it be? After all, in the previous 25 years the Gallic nation had enjoyed considerable success winning 14 times since 1962. Although the legendary Bernard Hinault had retired the previous year, established stars and young riders such as Laurent Fignon, Ronan Pensec, Charley Mottet, and Jean-Francois Bernard were rising to the top of their profession. It was upon these young shoulders that France laid its expectations and they were justifiable. Who could possibly have thought that Hinault’s last win in 1985 would be France’s last to date? No-one, that’s who.

The 1987 Tour was one of the most open. Only one former champion was riding: Fignon, and he wasn’t at his best. How wild and unpredictable was it? The whole race of 24 stages saw 10 riders wear yellow. The racing was wild and unpredictable. Even Sean Kelly, no shrinking violet when it came to riding on the rivet, expressed his concern to Fignon over the crazy style of racing, lamenting the absence of Hinault who, in his role as patron of the peloton, would have imposed order and sanity on affairs.

Of the French favorites, it was Jean-Francois “Jeff” Bernard upon whom the weight of expectation was greatest. Slender, stylish but with surprising strength, he had learned his craft under Hinault in the La Vie Claire team. At Toshiba he had new pressure – he was team leader and worked for Bernard Tapie, a flamboyant businessman who promised Jeff a Porsche if he won a stage. As the race wore on he was promised a ranch if he succeeded overall; his teammates received no such inducements. Over the course of the race, Bernard was cautious and mindful, staying out of trouble, waiting until the moment to assert himself arrived. His impeccably rationed efforts saw him clad in the (now sadly defunct) multi-colored Combine Jersey as the highest placed rider overall in the main classifications. His waiting game was over when Stage 18 was reached– a shockingly tough individual time trial up Mont Ventoux that was “only” 36 ½ kilometers long but had a wicked profile. It would be the stage for riders to finally show their true form and set the stage for the run into Paris.

Sitting at 2nd overall to Mottet, Bernard rode those 36 ½ kilometers like a man possessed. This was it – his big move: a ride to justify the hype. A ride to put him in the position to win the biggest race in cycling. His chance to join the greats of his sport. An opportunity to be the number one French rider. He had reconnoitered the course to the point where he knew every inch of road. He had practiced and practiced a bike switch because he planned on using two bikes, first a TT bike for the first flat section then on the mountain he would ride an early model carbon bike equipped with Dura Ace. Wearing the Combine classification’s multi-colored skin suit and yellow headband, his effort up the mountain, through a deafening cacophony of sound from thousands of crazy fans, was one of pure commitment. He held nothing back. Every picture of him during that ride shows a face wreathed in pain. A big glob of saliva rested on his left leg. His expression conveys not just the physical effort but the unseen expectation of an entire country’s hopes sitting atop his shoulders. Bernard didn’t just win the stage – he decimated his rivals: Herrera was second at 1’39”, Delgado at 1’51”, Parra at 2’04” and Roche at 2’19” and Bernard took the yellow jersey by a margin of 2’34” over Roche. Things were looking good – especially with one more TT to come.

The win was unquestionably incredible. But there were a couple of problems with Bernard’s plan to win La Grande Boucle. Although the upcoming Stage 23 was a time trial he was expected to win, there were still six stages to go including three nasty mountain stages. Comments that Bernard made after the Ventoux win showed some cockiness that the race was essentially in the bag. These did not sit well with his fellow competitors and rivals who schemed to prove him wrong.

For the next day, Stage 19, Mottet (who was a local and knew the route well), Roche and the other overall contenders studied the parcours carefully and planned a move. At Leoncel there was a feed zone after a downhill and a narrow bridge, followed by a steep uphill – they knew there would be a bottleneck. The rivals, now allies, planned to take on extra food and not slow up at a point in the race where a truce would normally be in order. Unsporting? Perhaps. Shrewd tactics? Yes. Evidence of a lack of patron? Yes. Like I said, this was a crazy race. The rivals were also well aware that Bernard was not terribly tactically astute and during the stage several teammates were in breaks rather than shepherding and protecting their leader. Bear in mind two things here: Bernard rode for a French team – Toshiba, and Mottet and Fignon rode for Systeme U; this was not just rider rivalry, this was team rivalry too. Another critical factor was this: Systeme U had Cyrille Guimard as its manager and Toshiba had the far less experienced Paul Kochli. Guimard was the wily ex-pro who had mentored Hinault and Fignon to their Tour wins and was a master tactician. Kochli was more akin to a trainer whose expertize lay in new scientific methods of training and nutrition.

As the stage unfolded the unexpected and the expected happened – Bernard punctured on the Col de Tourniol and had to chase madly to get back to the bunch which was by then strung out on the descent. The high pace meant getting to the front was almost impossible. At the feed zone at Leoncel his chain slipped off. The Mottet/Roche plan worked perfectly: the bunch slowed to almost a stop because of the bridge and feed zone. It was green light time for the rivals/allies who were right up front and they went full gas. With three Toshiba riders away in a leading break (instead of looking after Bernard) Martial Gayant of Systeme U launched the attack. Roche, Mottet, Fignon, Delgado, Herrera and Lejarreta were in the break and worked like dogs together. These were all the main contenders from the strongest teams. Bauer, Garde and Imboden, Bernard’s teammates who were way up the road, had to wait for their leader as the second break thundered past. Despite valiant efforts by Toshiba, the damage was done. Delgado won the stage from Roche and Bernard tearfully lost the jersey, undone by a rare collusion of rivals, bad luck and tactical naivete. He never wore yellow again and finished third in the Tour overall – despite winning the final time trial by 1’44”.

After the 1987 Tour, Bernard’s star never quite shone so brightly. He was injured in the Giro in 1988, the following year he had knee problems and in 1990 a saddle sore forced him out of the Tour. In 1991 he joined Banesto to be a super domestique to Delgado and Indurain. He bounced around various teams before retiring in 1996. Today he commentates for TV, still sure that the 87 tour could–should–have been his.

In recent years French riders have again begun to percolate near the top of the Tour podium. To call them contenders would be fair, but it’s been three decades since a Frenchman won his own tour – compare that to 14 Italians winning the Giro since 87 and 13 Spaniards winning the Vuelta in the same time period. The wait of a nation is invisible but nonetheless a heavy thing (ask tennis player Andy Murray about Wimbledon) and gets heavier by the year. Will the weight be lifted from the Gallic shoulders in 2015? We shall see.

43 Replies to “Guest Article: The Wait of a Nation”