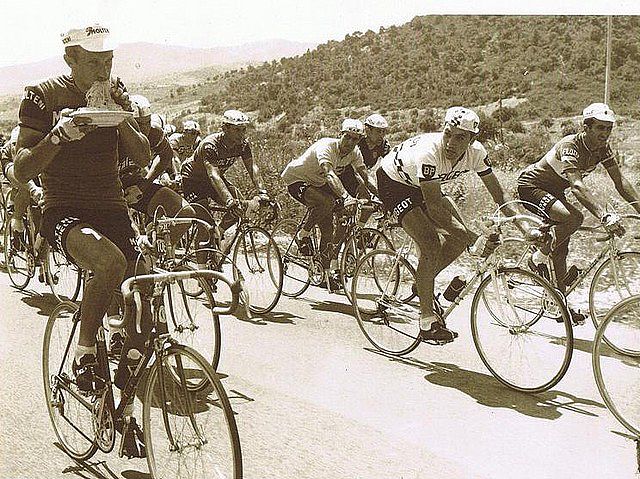 Guest Article: Tomorrow Belongs To Me

@Steamy is on fire here, so listen up. Cycling is a stern task master. She asks too much of your time. She asks you to eat but not too much, not too little. Saturday night talk is cheap; it’s what happens early on that dark Sunday morning that counts. Carpe the hell out of that diem, Velominati.

For an historian, I spend an inordinate amount of time thinking about the future. It’s a work thing: a longstanding interest in how past societies imagined their futures. And why we (still) don’t have jetpacks. The history of the future is a fun way to geek out on science fiction and new technologies and still call it work. I teach this stuff, too, and so have a wild collection of past futures material I can bring into the classroom. The future doesn’t need to be some far-distant utopia or dystopic landscape. It is often the mundane—or the simple practice of planning ahead. The other evening, the “future” playlist came around to Shane McGowan’s rendition of “Tomorrow Belongs to Me.” It’s a pretty ragged recording—his love song for Glasgow, one of three dirty old towns to which he owes his allegiance (four, if you include New York). Good Irish jigs typically are ragged, but McGowan must have been in especially poor form that day. He’s slurring and stumbling through the song: barely coherent. The braggadocio—that soibealta—that gives him his traditional swagger is missing. He sounds broken. Tired. It’s like he’s going through the motions. A jour sans, perhaps. You have to wonder if the producer wasn’t tempted to come into the booth and say something like: “Y’know Shane. Dis isn’t very good. Why don’t we try in da mornin after ye’ve sobered up a bit?” Or maybe he did and this is the next morning after another spree.

Goodness knows, I’ve had mornings like that on the bike. (This is actually a short essay on cycling and not a music review: this is a cycling website after all and I don’t know shit about music). My hips are stiff, my knees won’t bend, my shoulders are wracked with knots. I can’t muster the energy to get my socks on. Some mornings, the very act of selecting bibs and jersey are enough to put me off. The alchemy of riding says that all these ailments disappear within minutes of clipping into the pedals, but that doesn’t make the morning preparation any less of a struggle. And on some days, I’m perfectly capable of talking myself out of a ride altogether. But as the weather warms in the northern hemisphere and each day is welcoming for a ride, I find my form turning the corner. And with that corner, new incentives emerge to get on the bike and rediscover long forgotten fitness. The elusive promise of la volupté is tantalizingly close. Maybe tomorrow will belong to me. Or the next day. Or the day after that. “As long as I am riding/Tomorrow belongs to me…”

But there’s another catch. That form comes not just from cultivating your Rule #7 compliant time in the sun and measuring your rides in vertical metres, but also from showing a modicum of restraint at the table—and in the times away from the table. Food and drink are my undoing. They are a perpetual temptation. I was taught to finish my plate. The rules were less clear on how much food to load on. And there are evenings where a second glass of wine sounds like a very good idea. I’m good with brownies. I’ve never met a ginger & molasses cookie I didn’t like. Pie? It’s better fresh; eat it now.

And this is the poisonous promise of tomorrow. As I approach peak fitness, it’s easy to excuse another snack. I’ll ride that off tomorrow. I’ll shed the last 3kgs next week. Mañana. Always mañana. There’s a beautiful optimism that accompanies that attitude. But it’s laced with a venomous mirage. Hell, I should know. Professionally, I’ve been brimming with potential for nearly twenty years. That’s nice, but delivering on that potential would be better. There are days when I climb on the bike and the world is almost my oyster. But they’re fleeting, ethereal, and just out of reach. They’re near impossible to replicate without the devotion, discipline, and grinta required to see the job through. If I could identify which of my molars was the sweet tooth, I’d tear it out. In some psychological circles, experts say that we treat our future selves as strangers to whom we owe nothing. Which is to say not very well. If we ever invent time machines, my future self is coming back to kick my past self in the ass.

I’m not going to go all carpe diem on you, but tomorrow you will die. And if not tomorrow, then the next day. Or the day after that. If you’re into the afterlife, I’m pretty sure there are excellent pelotons in both heaven and hell. And if the bell tolls, you want your guns locked and loaded, not a week away. If the idea of a life after death doesn’t work for you, well: this is all you’ve got. Ride and be fantastic doing it. Riding is about sacrifice. There is no earthly reason why anyone should willingly choose to inflict such pain on oneself. But riding is also a battle against your own inner demons. It’s about conquering the voices in your head, the self-defeating detractions. Free your mind and your legs will follow. But free your mind from the temptations. And resist the notion that you can undo today’s trespasses tomorrow.

It’s a funny bit of conceptual chemistry—that the unbridled freedom of la volupté demands a Spartan-like rigorous adherence to discipline. A paradox, if you will. Discipline and temptation are two sides of the same coin. Lock the larder to unlock the guns: then tomorrow might actually belong to me.

28 Replies to “Guest Article: Tomorrow Belongs To Me”