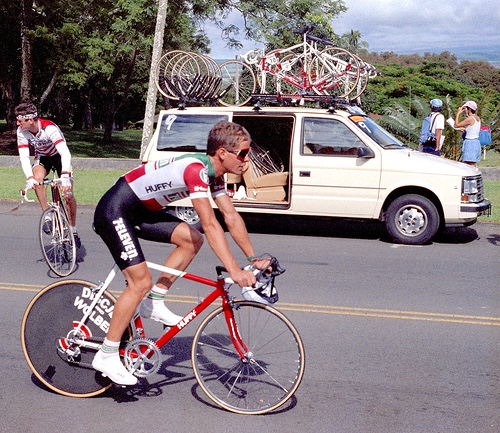 I genuinely miss the eighties. Funny Bikes, which I say without thinking this though. Then again, time trial bikes today are basically road bikes with a position for  tuned for “more speed”. In other words, switching to your TT bike today is like switching from your road bike to a slightly less comfortable road bike, with your arms sticking out. Back in the 80’s and 90’s, switching to your TT bike was roughly the same as swapping out your warmblood for a dragon.

There are many more reasons I miss the 80’s, for the record. Black shorts, off the top of my tiny brain. Also the adorable electrical tape patterns mechanics made over the valve stem hole on disc wheels, for more speed, as generously modelled by little Andy H. Also those Lycra covers on the hairnets they used to wear, also for more speed.

I don’t have to tell you that the shades back then make my heart go pitter-patter. I still have a pair of Factory Pilots/Eye Shades; I also rushed out to the store to buy a pair of Jawbreakers last week, just because they look so old school. Also because they are orange and white and I am a sucker for orange and white.

Everyone has a “shades sponsor” these days, but if you lacked one back then, it was all-in on the sweatband sponsor. “Wow! You make a double-tall sweat-band? These ‘roids make me sweat ‘double-tall’ so…YES PLEASE.”

Then there were the gears and chainsets. The first version of a “compact” was introduced in the 80’s; it was a 52/39, downgraded from the usual 52/42. Which was a downgrade from a 44 which was the smallest chainwheel my 70’s-era Raleigh’s Wiesmann crankset accepted.

But my favorite thing about the 80’s was the missing dust caps on cranksets; Andy doesn’t have one here, and I didn’t have one either. The day I realized I could shed 0.0032 grams by pulling out the dust cap was the day I became a Velominatus.