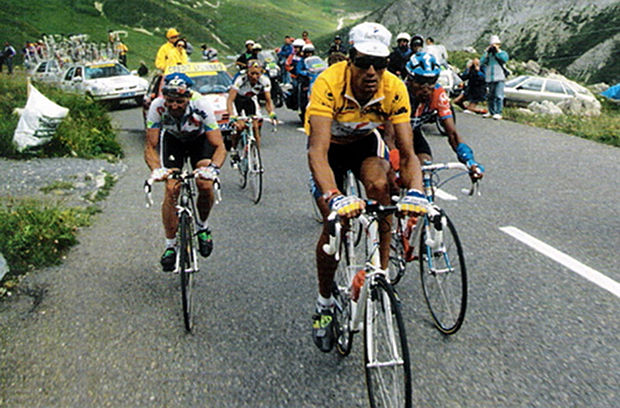 While the talk of the week has been on the Fraud Landis Chronicles, whether he cheated (of course he did), whether or not he's telling the truth (he is, this time) and whether or not Pharmstrong is a doping, fraudulent COTHO (he always has been), my head has exploded trying to make sense of the naivety of those still duped by the belief that one man, and one man only, is the sole clean rider of the last twenty years.  For the sport that we love is a dirty, corrupt one.  And I really don't give a flying fuck.  I've known for a long time that our heroes are flawed human beings, just like you and I, yet I still love it.

So I got to thinking back to the early days of my love affair with pro racing and Le Tour in particular, and the July evenings rushing home from work to catch the half-hour highlights package on SBS TV.  How enthralled I was watching the classic battles in the heat of the French Alps, as these giants of the road repeatedly attacked each other, in huge gears at speeds that seemed superhuman.  Because they were.

And while I was recalling these great memories, some names were dragged from the recesses of my mind, pushed back there by the fact that they weren't big names of the peloton, but nonetheless were elevated among those legends whom we still revere. For a fleeting moment, three weeks to be exact, these transients became superstars, transformed somehow magically from nobodies and elevated to the highest level in one of the toughest races in the world, then disappeared just as quickly.  Miracles do not happen, no matter how much some shamen try to make you believe they do.

The 1993 Tour stands out in my mind for some of the best racing I've witnessed in the race to this day.  I still have the VHS tapes of the race and love to revisit them occasionally, marvelling at the pure diesel power of Big Mig, the accelerations of Rominger, the Lazarus-esque rides of Chiappucci, the long, failed solo escape of Robert Millar over the Bonette.  Classic stuff.

But it was the performances of some previously undistinguished riders that stood out.  One Bjarne Riis, 107th two years earlier, suddenly 5th.  One Johan Bruyneel, who finished 7th and set the fastest ever winning average speed in stage 6 (since bettered only twice, once in 1999 by coincidence).  Two days later, one Lance Armstrong took his first Tour stage win, before abandoning while in 97th place.  One Alvaro Mejia, a Colombian grimpeur who was ever-present in the mountains.  And one Zenon Jaskula, a Pole who'd had some solid results, but never anything to match his remarkable 3rd place in the 93 Tour.

So who the hell was he?  Apart from success as an amateur in Polish national time trials, and also in the Sun Tour in Australia, his biggest result was 2nd in Tirreno-Adriatico behind one Tony Rominger in 1992.  He rode for Team MG-GB in 92 and 93, alongside the likes of  Tchmil, Cipo, Ballerini and later-proven dopers like Rebellin and Museeuw.  He was in good company, at the right time as EPO was flooding the peloton and the racing was becoming supercharged.

Every night as I watched, his name would be mentioned more and more by Phil and Paul.  They had no idea who this guy was either, but were equally as impressed/surprised/baffled by his performance as I was.  With Indurain and Rominger doing their best to annihilate each other over the big Cols, there'd always be the same faces hanging on to them like barnacles on a ships hull.  Riis, Mejia, Jaskula.  They were revelations.  They were riding like men possessed.  They were juiced to the gills.

Rather than just hanging on, defending his GC position of third, not making too many waves, Jaskula must've been thinking it was all too good to be true, and with the magic potion coursing through his veins probably making him feel like Superman, he took his chance for ultimate glory.  Stage 16 to Saint-Loury-Soulon saw him outsprint Rominger and Mig after they decimated the field on the last climb.  The speeds and ferocity of the attacks were incredible.

Jaskula looked somewhat sheepish on the podium in Paris, and Indurain and Rominger had a look of “who the hell is this guy?” as they shared the steps with the unheralded Pole.  Perhaps he knew that he would never reach such heights again, that this performance couldn't possibly be repeated, and that he would rest on his laurels and fade into obscurity with a huge question mark over the validity of its credibility.

And then, he was gone.  Other riders would emulate his ephemeral performance in years to come, products of the influx of doping programs masterminded by the new breed of team management and sports 'doctors'.  And of course, the wonder drugs they administered.  I didn't really know what was going on back then, but I knew the racing was enthralling, and in hindsight it's easy to see why.

33 Replies to “Evanescent riders of the 90s: Zenon Jaskula”