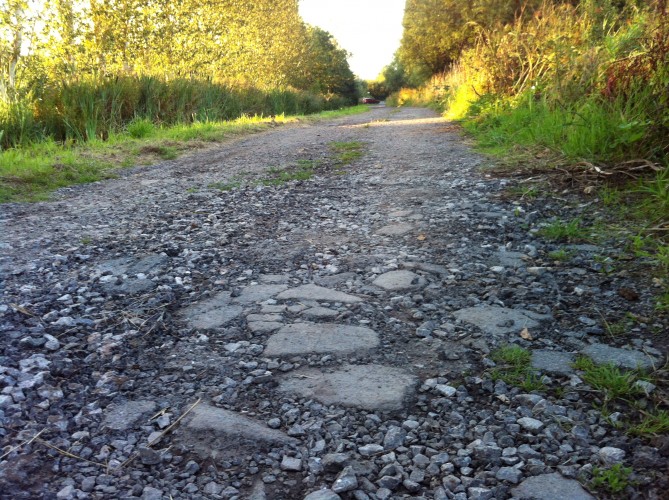 Somewhere in the 10 cm thick Velominati editorial handbook is an admonishment about running articles about rides. @RobSandy’s bit has the word Roubaix in its title, it took place in Wales and more than one Velominati was riding, so we move ahead. It is almost a Cogal without the excessive drinking. Thanks @RobSandy for spending your weekend doing something useful and documenting it.

There are good ideas and bad ideas. And then there are ideas that transcend good or bad. I’m going to take a wild stab at a definition and call them Awesome ideas. With a capital A.

A bit of investigation revealed the details; a sportive taking in the flat, open roads between Cardiff and Newport, interspersed with sections of unpaved and gravel roads, finishing in the famous Maindy outdoor velodrome (producing alumni including Geraint Thomas, Luke Rowe, Elinor Barker & Owain Doull), to attempt to provide an experience similar to racing Paris Roubaix. This was an Awesome idea.

I was in with bells on, and shortly afterwards I found out that @Teocalli had registered too. When I saw that a lot of the strong racers from my club had also signed up I had a rough idea what sort of ride this was going to be; not a sensible weekend pootle.

As the day got closer I considered various bike permutations; my Nr#1 with ‘Cross tyres, or with Pave tyres, or using my commuter so as not to damage Nr#1. In the end I decided just to Rule #5 and ride my Nr#1 with the standard tyres and not worry about it. This would result in a) more speed on the tarmac sections b) looking more Awesomer. I took the same approach with my clothing; normal club bibs and jersey.

The ride itself was pleasantly small-scale and low key; around 60 riders, set off in two close waves to ease through the urban roads of Cardiff before hitting the open roads of the Wentloog flats. An organised double line was set up as we hit the flats and the pace stepped up as we wound through small quiet lanes.

The first section of gravel (Percoed Reen) shook things up a bit, although we were to discover that as surfaces go this one was quite pleasant – fine grained, smooth gravel. This soon ran out and turned us into the barely-paved Pont Estyll Lane, complete with broken tarmac, large puddle potholes and lots of mud. A brief respite on the tarmac led onto the first real test of the day, the very rough Lighthouse sector. This is where the first big selection of the day happened and the group I found myself in at the end was only 7 riders.

Things smoothed out from there and we continued at a decent pace, sometimes pushing it, sometimes easing back. There was always someone ready to take a turn at the front although more often than not one of the older guys of the group found himself there (and more on him later).

More gravel sectors passed, some smoother, some rougher. Saltmarsh was smooth and fast, while Black Wall was extremely rough. This is probably as close as I’ve ever been to riding the cobbles; bumpy, uneven, pocked with potholes full of water (depth unknown), and it was surprising to see how the group strung out on these sectors.

A halfway feed stop provided some very temporary respite, before we were back on the road, with a noticeable increase in tempo. We had lost at least one rider off the back before we hit the Black Wall sector again, at which point mechanicals and fatigue played their part in equal measure and the lead group back on the road again was reduced to 3 (two Ajax and one non-Ajax).

Going hard seemed to be the right thing to do, so we did, taking turns of a few minutes each at the front and driving the pace along. Returning through Newport I started to feel the burn, and was on the verge of losing the wheel in front a few times, but I managed to get back on before the final gravel sector, revisiting Lighthouse in the other direction. At this point the non-Ajax rider really put the hammer down and I was gasping and mashing my pedals just trying to keep him in sight.

I had managed the gap and was about 50m behind, with the end of the real rough stuff in sight when I heard an unsettling hissing noise…then a familiar bumping sensation as my front wheel flatted. Looking up to see the lead wheel disappearing around the corner and looking back to see the 3rd placed rider closing the gap I think I knew something of how the pros feel when a mechanical dooms their race. However, this wasn’t a real race and my aim was to finish, so I stayed calm and affected a particularly slick inner tube change, getting going again just as the 4th placed rider caught me.

I hadn’t written off the chances of catching the guys in front at this point so I went into TT mode back across the flats, burying myself before we made it back to Cardiff city limits.

To add a full Roubaix vibe, the organisers had added 2 laps of Maindy Velodrome to finish the ride. I could see the first 2 riders as I entered but I’m pleased to say in the spirits of Rule #5 and Rule #10 I continued to put the hammer down until I crossed the line.

At this point the organisers put a glass of champagne in my hand. I don’t really need to add anything to that apart from it was Awesome.

I stayed around to try and recover the energy to ride home (fortunately, I live less than a mile away from the track) and to meet the famous Mr Teocalli as he finished the ride himself. We both agreed it had been brilliant.

A postscript is that I have found out since that the winner, and the guy whose wheel I was chasing the whole day is Alun Owen, former Welsh National Road Race Champion, who represented Wales twice in the Commonwealth Games.