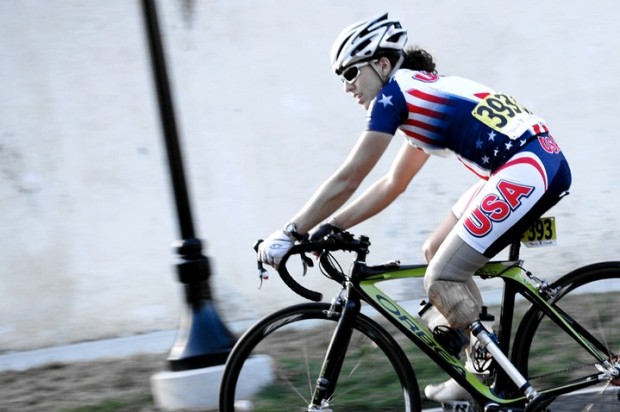 Keeper Jim and I came across Meg Fisher during an icy-rain Rule #9 training ride on Mercer Island in March. The first thing that struck us was that there was a good rider up the road, one of the few braving those cold, wet, early morning hours. It wasn’t until we caught up to her that we realized she was riding with a prosthetic leg.

The three of us got to chatting the way cyclists do, and every time Meg went to the front to push the pace or got out of the saddle to grind over a roller, I was amazed to see how ‘normal’ her pedaling action was. Apparently, it didn’t come naturally or quickly, and after starting a conversation on prosthetic pedal stroke magnificence, Meg has graciously agreed to contribute a complete article to this geekery.

In the meantime, she’s joined our community (and reformed in her Rule #37 violating ways). Meg now actively blogs on her Tumblr and has also set up a donation fund to help her with upgrading her prosthetic (can you say ‘carbon’?) and getting her to the 2012 Paralympic Games. Please donate if you’re willing and able.

Pedaling with one leg and one peg-leg (that vaguely resembles a pipe bomb) has presented some challenges.

In an attempt to make all of this as clear as possible, I am going to share some basic facts about prosthetics. A “socket” is the carbon piece that is shaped like a cup. This is the part of the prosthetic that encases what remains of someone’s limb; for me it covers my knee. The “pylon” is a vertical piece of pipe, usually made of aluminum, that connects the socket to the “prosthetic foot.” All prosthetic feet are made from carbon. The stiffness or rigidity of each foot is based on how many layers of carbon are used and how they are laminated. I assume that you all are experts on carbon!

Back in the day, before I received my specially adapted biking prosthetic (the pipebomb), I rode using my everyday prosthetic in a typical cycling shoe. I used this set up for several years when I primarily raced mtn bikes and off-road triathlons. I vaguely recall feeling some low back pain and right knee pain from back then. In an attempt to alleviate the pain from my prosthetists, John Angelico & David Rotter with Scheck & Siress Orthotics & Prothetics, designed my current cycling leg. I went into their office with my bike on a trainer and asked them how they could help me look more “normal” on a bike. The owner and master bike fitter of Missoula Bicycle Works, Alex Gallego, had given me some advice to pass on to my prosthetists. John and David basically mounted a heavy-duty aluminum pylon with a carbon prosthetic foot to my socket. After experimenting with pylon length and cleat placement, we discovered how best to compensate for my missing ankle.

Fundamentally, I rode like someone who had an exceptional leg length discrepancy. When I rode with my everyday prosthetic leg, it lacked the biomechanics inherent in intact ankles. During a pedal stroke with an intact ankle, there is plantar flexion & dorsiflexion. Since I could not accomplish these movements with my prosthetic, I had to compensate by shifting on my saddle and changing my biomechanics everywhere. Observers could clearly see my hips and lower back shifting dramatically during every pedal revolution. I had to set my seat post height high enough so that I would not pinch the back of my left knee during the top of the pedal stroke. If my seat height was too low, I developed blisters on the back of my knee that could be so bad that I literally could not walk the next day. I also wanted my seat height low enough so that I could reach the bottom of the pedal stroke. Usually, people with a leg length discrepancy would not develop blisters on the back of their knee. However, they may notice difficulty reaching the bottom of the pedal stroke and observers may see compensatory motions in the low back.

My prosthetists mounted the cleat under what would be my heel. They also made the pylon a bit longer than my shin on my other leg. These adjustments allowed me to reach the bottom of my pedal stroke and keep my seat height high enough to relieve pressure on the back of my knee. By using a specially designed cycling prosthetic, I became better able to keep my hips ‘quiet’ on my saddle.

Still, as I up’d my mileage and continued training with the National Paracycling Team, I continued having low back pain, right knee pain, and severe pain in the right hip. It was deep pain inside the front of my right hip. It felt like someone was driving an icepick into my joint capsule. The only time it felt better was when I was laying flat on my back. Sitting with my hips near 90 degrees caused intense pain. I managed to make it through the season and competed at the UCI Para World Championships in 2010. Somehow, I squeaked out a win in the time trail (even after starting ~40sec late) and the road race. I thought wining two world championship rainbow jerseys would be the end of my cycling career. In the off-season, I went to physical therapy and the prognosis looked bleak.

That’s when Brian Williams, my friend and talented Cat 1 rider, came up with the idea of shortening only my left crank arm. Brian explained that for most individuals with a leg length discrepancy, using two different length crank arms does not alleviate their symptoms. So I called SRAM and explained my situation and Brian’s idea. SRAM generously sent me a 165mm left crank arm at NO CHARGE! Brian installed my new crank arm and set me on a road to recovery.

I have been riding with my shortened left crank arm for a while now. The pain in my right hip is gone and my lower back pain is under control. Initially, the difference in crank arm lengths did feel funky. However, I quickly adapted and will never go back. I have not had anyone measure the strength or power generated by my left leg. If you ever saw me in spandex, you could quickly see that my right side much bigger than my left. I am continually refining my pedal stroke. It has come so far and there is still room for improvement. At times, I feel like my left leg is sabotaging the work of my right leg. Maybe I should just cut the rest of it off?!

At the end of the day, I am just like you. I get on my bike and try my best to ride fast and keep the rubber side down. With any luck and a whole lot of effort, I will earn a spot on this year’s US Paralympic Team going to London. Keep your fingers and toes crossed for me. I could use all the luck in the world.

72 Replies to “Guest Article: The Fine Art of Pedaling”