Mektronic and the Electronic Revolution 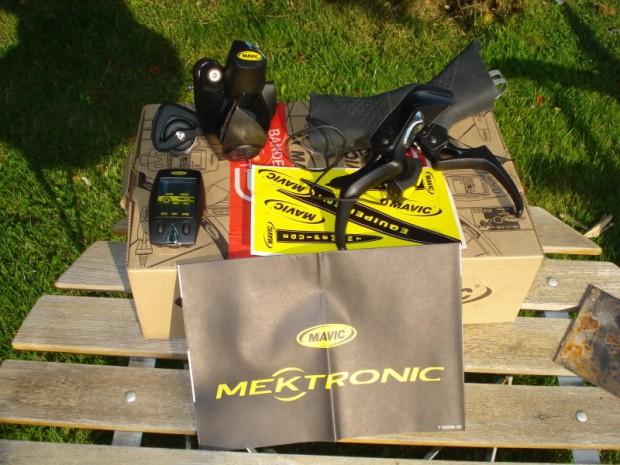 The migration to electronic transmissions in cycling is inevitable. Cables have lots of inherent problems; they stretch, rust, break, and get clogged in their housings. Worse, they are part of an imprecise mechanical system that requires constant maintenance and adjustment, and one that can by design only work perfectly in one gear and gets progressively worse the further you get from that “perfect” gear. In short, cable shifting sucks, and it will eventually go the way of friction-shifting.

The obvious solution is the electronic drive-train; once adjusted, an electronic system should need little further adjustment or maintenance since there are no cables to stretch, and it should work equally well in all gears because an electronic system should be able to set the chain perfectly regardless of the derailleur's position with respect to the cog in the cassette. The only problem with electronic shifting is that it takes human control out of the system, which makes it suck even more than cable shifting.

When Mavic released their Mektronic groupo, I jumped on it like a pothead jumps on a bag of Doritos. Sadly, I very quickly became disenchanted with the system. For starters, it would only shift the rear derailleur electronically; the front was operated by an enormous cast-iron lever that looked like it was forged in the middle ages by a monkey with one eye.  I felt like an executioner on the gallows pulling the lever every time I shifted from the big to little ring.

Unfortunately for Mavic, the front shifting was the best part of the system. The Huangism “Press and Forget” was coined to describe the process for shifting. This was supposed to mean that you didn't have to think about shifting once you pressed the button to shift; the “reliable” system would deliver a perfect shift for you without you having to worry about it. What it really meant was that it had a mind of it's own. Every time I would press the little yellow button to shift, I sent myself on an emotional roller coaster ride as I waited to see what would happen.

On the good shifts, a second or two would go by and then it would shift. On the averages shifts, it would not do anything for a little while and then shift at a surprising time, like right when you gave up and got out of the saddle to power over the hill you had intended to downshift shift for. On the bad shifts, it would just never shift or shift without the button being pressed.

It got worse when riding close to a radio tower where radio frequencies were strong. (Mektronic was wireless and functioned using radio frequencies.) There was a television broad-cast tower on one of my routes, and on several occasions, riding by the tower would cause the whole system to reset and stop working at all. It was like the Mavic version of the Blue Screen of Death. That said, not shifting was much better than the cases where it would shift without input. The worst experience I had was on a group ride out by the airport in Minneapolis when the derailleur shifted from the 12 to the 23 in a single instant because some guy in the control tower spilled his coffee on the switchboard or something, causing the chain to snap and me nearly crashing as the group sprinted for a yellow sign.

Another problem with Mektronic was it's gargantuan size. The levers were too long and were banned by the UCI as they offered a non-regulation aerodynamic hand position (the unfortunate pro teams who were sponsored by Mavic raced an even uglier stubby version of these levers). The derailleur was enormous, with a bulbous extension to accommodate the ratchet pushrod that provided the shifting mechanism and which was prone to snagging other items around the bunch like wheels and rider's feet. In a crash during a crit, I tore off my derailleur hanger when my bike hit the deck.

Eventually, I abandoned ship and moved back to a good old fashioned Dura-Ace 7701 drivetrain. There's something very comforting about knowing that a steel cable is running between my shifter and my derailleur; I don't know about you but if I need to shift, I really can't be bothered with waiting for a derailleur which was apparently programmed by a disgruntled software engineer from Microsoft to decide if it's going to go ahead and shift or not. But maybe that's just me.

Electronic shifting faded into the background as Shimano and Campagnolo quietly worked on prototypes over the past decade. Campagnolo and Shimano were both slated to release their fully electronic groupos last Fall, but Campy eventually decided against putting the expensive set into production due to the economic climate at the time. Shimano, on the other hand, did release their version despite a whopping $3250.00 for the derailleurs, shifters, and batteries. A complete groupo runs upwards of $4500-$5000.

On the plus side, it appears that Shimano has actually designed a good system. Aside from it being a bit expensive, all reviews and stories point to this being a really reliable and effective system. The system is wired, so outside interference is limited. The front derailleur is electronic and, provided it is set up properly, will reportedly never drop your chain. Shifts are lightening-quick and reliable. The system self-feathers the chain, running silently in every gear. Even 'Cross racers are using it in the the mud and crud.

I'm anxiously awaiting my first opportunity to try it out. Accepting donations now.

44 Replies to “Mektronic and the Electronic Revolution”