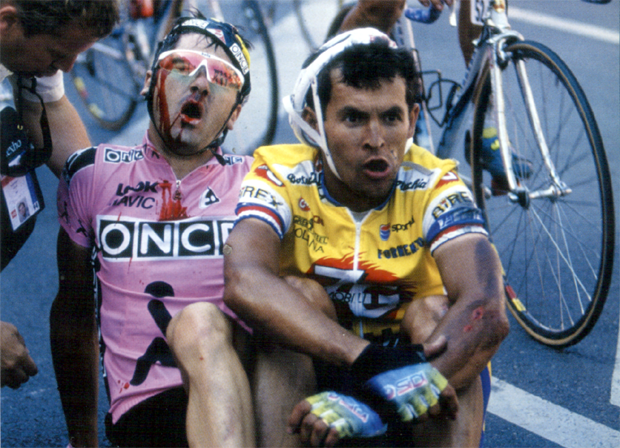 As we grow older, humility takes it’s chilling hold. The little nagging questions like, “Will this next activity kill me?” start to weigh heavier on our minds.  It’s not that these questions weren’t asked when we gripped our youth like a toddler grips his penis; it’s just that they didn’t mean as much to us then as they do now.

You see, when you’re young and that particular question is asked, it is spoken in a wimpy voice which sounds a lot like it’s being a Pussy. As we get older, the Smart Ones realize that annoying sound is actually the “Voice of Reason” and that perhaps we should not ask our buddy to “hold our beer” while we attempt the as-yet-unaccomplished feat of jumping our BMX from the top of the interchange to that tiny little ledge an impossible distance away.

Such is the progression from Sprinteur to Rouleur. The devaluation of risk versus reward; of the pleasure of winning versus the pleasure of winning at all costs. We’ve seen it before; Sean Kelly wins Green at the Tour more times than I can count and then turns to winning the Classics instead. Eddy Planckaert starts as a sprinter, eases into winning Flanders, then wins Green, and turns to winning Roubaix. Johan Museeuw wins Green and becomes the Lion of Flanders, never to ride the Tour again. George Hincapie made the same transition, albeit without any of the aforementioned results. I feel strongly that after a season of near-misses in the classics and taking a beating in the gallops, Tom Boonen is about to follow suit.

It’s a natural move from Sprinteur to Rouleur, but often it’s difficult to pinpoint the exact time when the transition happens; Kelly, Planckaert, and Museeuw made the  change gradually. I don’t know who the guy is pictured here in front of Jalabert – he appears to be either Dutch or Luxembourgian, based on the cuffs of his sleeve. Whoever he is, he looks completely fucked – not to mention that we never heard from him again after such a nasty crash. I can make an educated guess that, based on the apish look on his face, he’s probably Dutch. (I’m Dutch, so that’s not racist. If you lash back in kind, I’ll sic the Anit-Dutch Police on you. They are mean, and will get the Swiss to write you an angry letter, so don’t tell me you weren’t warned.)

Between the two subjects in the photo, the Dutchemburg guy looks by far the better off. The crash was caused by a Policeman wanting to photograph the finish of the 1994 Tour Stage to Armentieres, and who in his idiotic Darwinism stepped into the path of the charging bunch. Jalabert required extensive facial surgery in order to stop looking like a stand-in for a horror movie, but nevertheless returned to win the Dotty Jumper a couple times in the Tour – distinguishing himself as the only rider besides Eddy Merckx and Bernard Hinault to win both the Spotted Dick and the Green Willie.

For that, I thank the ape-man in the sweet Cinelli hairnet for offering us the Defining Moment in Jalabert’s career when he became an all-rounder who won our hearts.