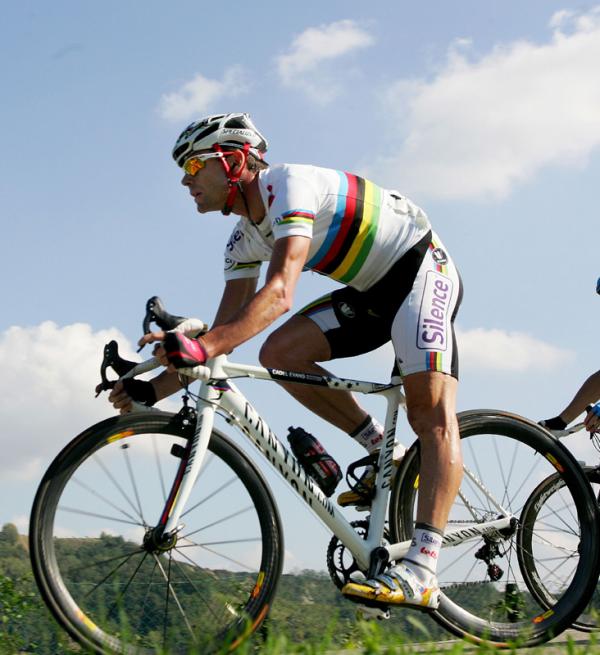 Unless you spend a lot of time with the Dutch, you probably don’t realize how awesome we are.

We can pretty much walk into any situation and immediately understand the landscape and explain to all the non-Dutch in the room precisely why they are inferior.   For the mathematically-minded, let me put it in equation form:

Dutch + Any Situation = Opinion Delivered with Arrogance and Condescension

This is a long way of saying that, as a Dutchman, I get very used to being right all the time.  In fact, I’ve come to expect it, which makes it all the more shocking when it turns out I’ve made some kind of error.  Recently, I predicted that Cadel Evans would become the next Rainbow Turd.

Unless he has a change of heart for next season, it appears that Cadel has not only shaken the “Nearly-There” monkey off his back by winning the World Championships, but he has also managed to diverge from the pattern he set during his brief stints as race-leader of the Tour and Vuelta and made his Rainbow-clad racing debut in a remarkably classy kit, complete with black shorts.

Despite the fact that my prediction was seconded by Marko, it still comes as a shock to my system to realize I could have made a mistake.   That said, the possibility of him switching shorts over the winter notwithstanding, I’ve never been so glad to be wrong.

I am just now cracking my late-to-arrive Rouleur, Issue Fourteen.  One of the first articles to grab my attention is a piece on La Course en Tete.  It consists of a magnificent account of what this film means to cycling, as well as an interview with the director, Santoni, who had never seen a bike race.  He made the following observation:

I was interested by the myth of cycling.  When you watch a football game you see everything but with a bicycle race the winner is doing things people never see.  Sometimes the main event happens when no-one is there.  The effort is invisible.

I think anyone watching the live coverage  of the race might feel this way about Cadel’s World Championship win.  The footage showed him never at the front until the decisive moves started going.  Almost unnoticed, he was in a three-man move that peeled off the front.  Suddenly, the camera cuts to Evans, several meters off the front of the small group.  He looks back, see’s his gap, gets out of the saddle and accelerates.   It all looked oddly simple.  Easy, almost.  The cameras missed the suffering and instinct it took to get there, and whatever effort he made to get off the front.  We picked him up when he looked back and rode away from the race.

The effort was invisible.

6 Replies to “Expect The Unexpected”