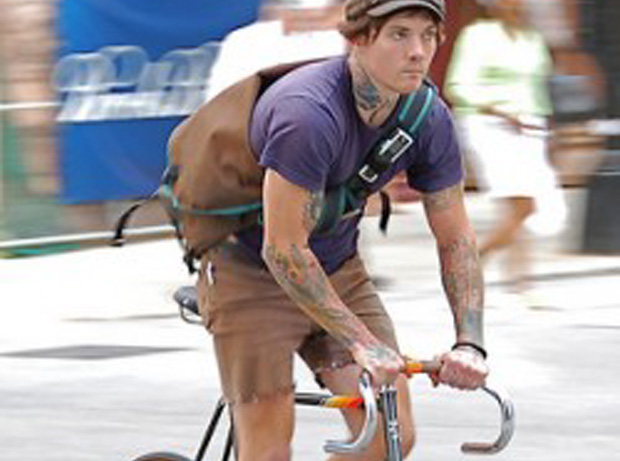 I think it goes without saying that riding a fixie properly takes quite a bit of skill and finesse; the pedals being directly connected to the rear axle demands a fluid pedaling technique when riding at speed, not to mention the skill required to stop (quickly) without brakes.  The issue I have with the fixie community is not so much the bike as it is with the silliness of riding a single speed in a city overrun with long, steep hills.  For the most part, it means people are choosing this vehicle for its form rather than its function; the result is a preponderance of people who lack the skill to handle such a machine.

Not long ago, we were sitting in traffic in downtown Seattle.  Sitting in traffic is what we do in downtown Seattle, and people commonly ride their bike instead since commuting by bike during rush hour is much more sensible than doing so by car.  As we poked along, I noticed a guy weaving through traffic.  The rider was adorned in typical fixie garb: messenger bag, tight jeans, enormous belt buckle. As he approached, the erratic nature to his motion belied his misplaced confidence in his skills.  He seemed to be enjoying the responsiveness of his bike and was whipping around cars as he picked his path along.  But there was a problem: he was over-steering and his efforts to stop his bike were overstated; he lacked the subtlety of a skilled rider but rode with an aplomb that goes hand-in-glove with someone whose aptitude doesn’t quite match their attitude.

I held my breath as he passed our car.  He veered to the right and then quickly to the left before falling over onto the trunk of a beautiful, black Mercedes just in front and to the right of us.  Owing to the nature of his fixed gear, his bike continued moving forward and his body lay limply and ineffective over the car as his belt buckle scraped a clean, uninterrupted gouge along the length of the car’s gleaming, black body.  He moved his arms down to try to push against the car, searching in vain for purchase to slow his movement.  He tried to pull his feet from his pedals but was unable to, thanks to his feet being secured by a set of cool, double-strap toe clips.  Finally, he alighted upon the rear-view mirror which detached from the car’s body with a sickening crunch before he came to his feet just in front of the car, grimly facing the driver whose dismembered mirror he held like a football.

Traffic started moving again at this point so we didn’t get the opportunity to see how the interaction between the driver and Fixie played out, but the manner in which he stood fidgeting with the wires that dangled from the dismembered mirror, face agog at what had just transpired didn’t bode well for his negotiating position.